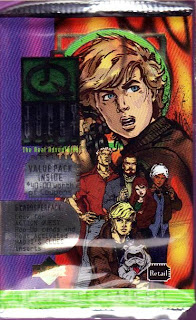 These cards were produced by Upper Deck in 1996.  They depict various scenes and characters from the JQ "real" adventures series.  Frankly, I always liked the "classic" JQ cartoons.  Then again, I am a bit old school in some of my ways. 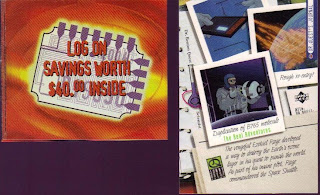 The first thing in the pack is a mini coupon book.  You could get phone cards, free action figures (with UPS of course), discounts on Pillsbury, a free pack of JQ cards, discount on the CD-ROM game, and more.  Each card is presented like a case file or evidence in a case.

The backs of the cards have more info about the particual item/person/scene depicted on the front.  Frankly, the most interesting thing on the back is the holofoil logo, which instead of the UD logo is the JQ one. Cute.

The CONFIDENTIAL folder card is actually a checklist of sorts, or so I think it is but it is kinda hard to tell just what is going on with these.

If you like Jonny Quest, then you'll just love Toby Danger!