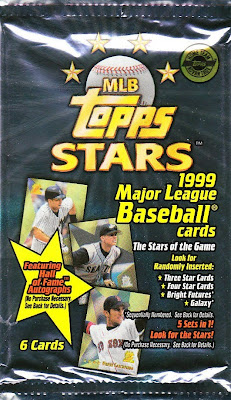 I grabbed this and a few other packs out of the cheapie bucket at the card shop the other day. Unless I wanted to plunk a wad of cash on last year's boxes or 2010 base, this was all that was available to me.
I find packs from the late 1990s intriguing because I didn't collect then. But also, it's because the sets were so WEIRD. Look at the wrapper closely. In red it says "5 Sets in 1!" like that's a badge of honor.
I'm pretty sure people had full-time jobs in 1999. If they were anything like me, they didn't have time to collect one set, let alone five.
Also, I enjoy the "Look for the Stars!" line. There are stars at every turn in this set. You can't miss them.
Anyway, each pack featured three base cards of stars of the day, two "one-star" cards and one "two-star" cards. I don't know if the stars signified some sort of player ranking or if it was just random.
Also, if you got lucky, there were "three-star" cards seeded every three packs and "four-star" cards every 10 packs. There were also parallels and reprints everywhere but we won't go into those. And you supposedly could pull autographs of a Hall of Famers.
Here are the six cards: 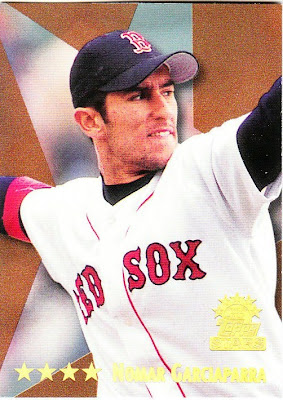 Wow. A four-star card right up front. Nomar was at the peak of his popularity in 1999 and won a batting championship that year. The four-star cards feature a deep gold color outlining the star background. 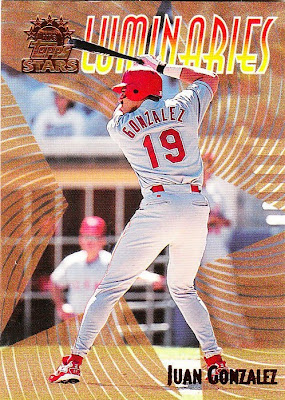 "Luminaries" is one of the subsets. The other is "Supernovas." Note the gold-foil stamping in the shape of a star. It has a stencil-like look. Stenciling was big in the late '90s. Or so my wife tells me. 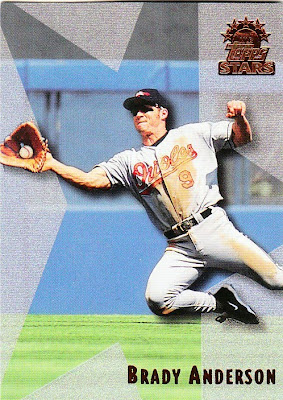 Here is the base card version. The base cards have a silver star outline and copper/bronze foil stamping. 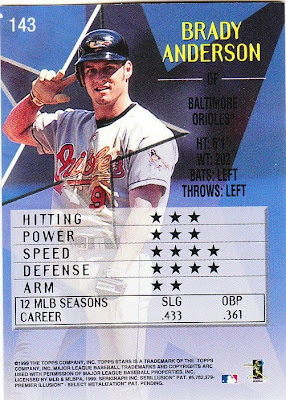 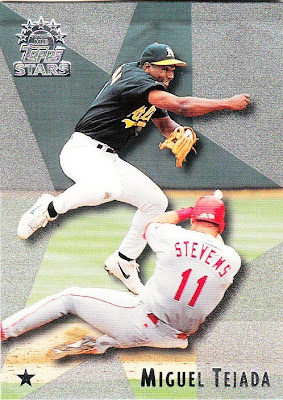 Here is a one-star card. Silver outline is the same as the base, but there is silver-foil stamping instead of copper and a tiny star in the lower left-hand corner. 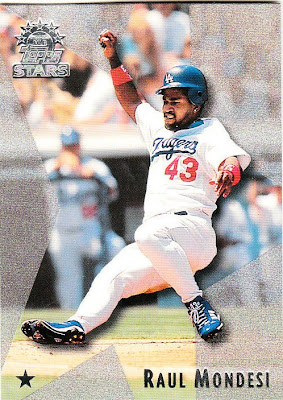 The original "Raauuuuuuull!!!!" Excellent! A Dodger I need. This satisfies the pack's requirement of two one-star cards. 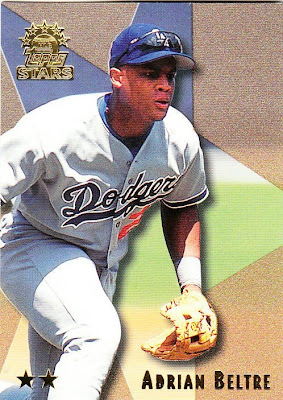 Yay! Another Dodger. This is the one required "two-star" card in the pack. The gold outline on the two-star cards is a little lighter than on the four-star cards. But the gold-foil stamping is the same. And you can see the two stars in the lower left-hand corner. 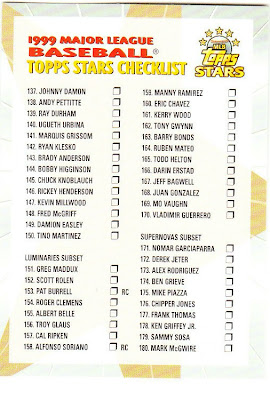 Every pack, apparently, had a checklist.
I beat the odds on that one. Only one base card, because there was a four-star card and a subset card. And I landed two Dodgers that I needed.
Well, that wasn't so bad. But I'd really like to know if anyone collected all "five" sets.
I grabbed an even better pack out of the cheapie bucket, which I'll feature on the other blog just as soon as I can get the post up.

It has to be reeeeaaaalllllyyyy good for me to collect a one set set. 5 is too much.