Written by Collective Troll at 2:00 PM
Greetings collectors, it's the Troll back again for a quick rip... This is one of Upper Deck's many shortlived new card lines. The product is called Fun Pack and they appeared in 1993. I don't know how long they lasted, this is the only year I have seen. These packs had 6 cards, a low MSRP and were geared towards kids. 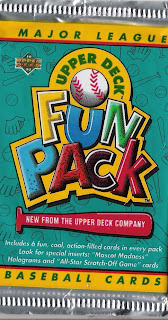 They went with godawful colors, glow in the dark cards, stand-ups, cut-outs, fold-outs, scratch-offs, mascot cards, goofy poses and pictures and cartoons. They are actually pretty neat in my opinion. Some of the cards in this pack stuck together and lost gloss, but most survived. It was a pretty HOT pack. 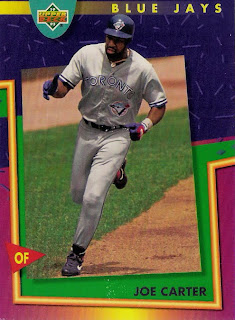 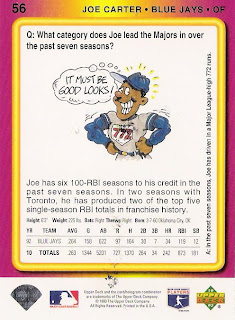 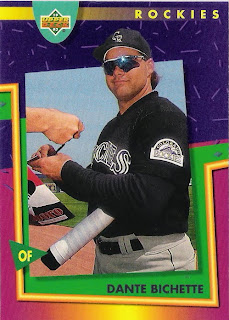 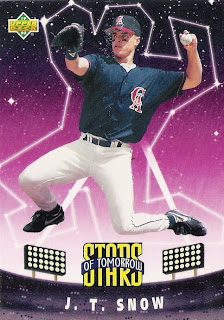 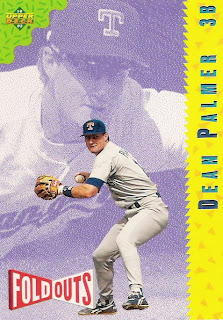 A fold-out insert of Rangers third baseman Dean Palmer. These are 1:9 so I guess this is a HIT! Fold-out isn't just a catchy name either.

Next is a serious pose of Braves pitcher Greg Maddux on card #65. 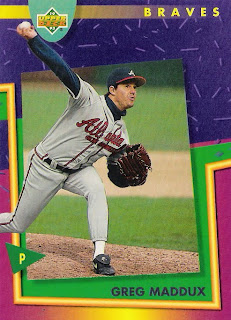 To keep things light there is a cartoon on the back. 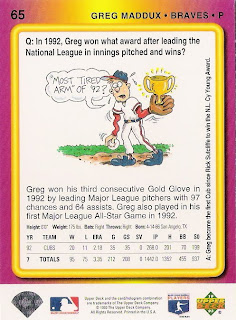 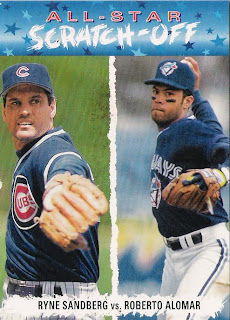 We also got an All Star Scratch Off Game card featuring Ryne Sandberg and Roberto Alomar. These are 1:5 and this folds out, too. The 6th card in the pack is #68 of another Braves pitcher John Smoltz. 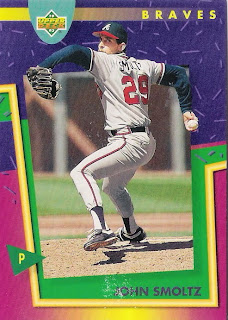 Again, this is a HOT pack. We got a bonus card (only supposed to have 6) AND it is an insert at 1:3. Its also the coolest card I have pulled in a while. Check this out, it is a Glow in the Dark sticker card of Cubs Hall of Fame second baseman Ryne Sandberg. 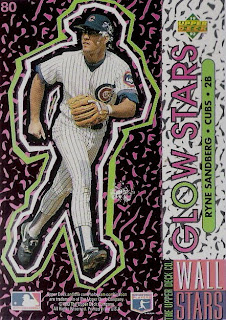 Freaking awesome! This pack rules! Unfortunately it lost some of its lustre, but it's still great. I have 4 more packs of this product. What should I do with them? Thanks for reading. I LOVE this hobby! More to come! Go Rays! Troll out.

There was a Fun Packs set as well in 1994 that included a Michael Jordan rookie card. The print run was a lot lower than the previous year and the 94 set used to go for a decent amount of money when Jordan baseball rookies were hot. They're a fun box to break and I think that I broke at least three boxes from each year over the years.

Dude, very very hot pack, well done! I actually have a Chipper Jones Stars of Tomorrow card, and I've held on to it ever since I pulled it way back when. Chipper was the only "Star" I ever pulled good cards of, so I have 3-4 decent rookies of his sitting around. This one may have been my favorite though.

I love the Glow Stars cards... makes me want to go out and buy a box of this stuff.

A certain Jon I could name may be interested in that sweet Maddux...

Best. Pack. Ever! Two Ryno inserts and one of them sharing a card with my other 2B idol, Robbie Alomar. Twamazing. :D