Written by Fuji at 11:06 PM
Are you a fan of food issues? What about Japanese baseball cards? What about inserts? 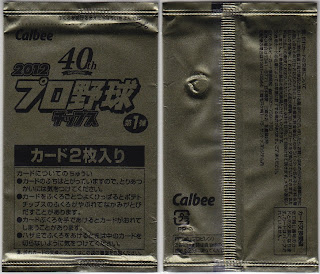 If you answered "yes" to any or all of the above questions, then 2012 Calbee Pro Yakyu Chips is the product for you. Calbee is a company in Japan known for their snack products like: potato chips, vegetable snacks, and shrimp crackers.
Each specially marked bag of chips contains a pack of cards attached to the back. And each pack contains two cards.
I've been looking for bags of these chips at my local Japanese grocery stores... but I've never been able to locate them. Luckily, I have a few friends in Japan who are willing to pick up packs of Japanese baseball cards for me every now and then.
I recently purchased 10 packs of Calbee Series 1 from one of my buddies to add to my unopened Japanese Baseball Card Pack Collection. But I couldn't resist the urge to bust at least one of them. So without further adieu here's a look at the two cards I pulled:
Base Card #1: Nobuhiko Matsunaka 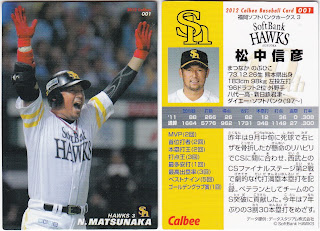 I've never heard of this guy, so I emailed my friends in Japan. Matsunaka is a pretty popular player who's at the tail end of his career. During his peak, he was a 2x Pacific League MVP, a 5x Best Nine Award Winner, and an 8x NPB All-Star.
Calbee lists the year and card number in the upper right hand corner on the front, along with the player's name, team name, jersey number, and team logo at the bottom of the card. While some collectors may consider the design to be too simple and boring, I love the fact that it allows the amazing photography to take center stage.
Memorial Insert #M-10: Tatsunori Hara 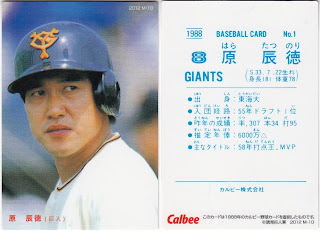 Hara is currently managing the Yomiuri Giants, a team competing in the Central League in Nippon Professional Baseball. He also led the National Team to a title at the 2009 World Baseball Classic.
The card I pulled is a reprint of Hara's 1988 Calbee card. The set focuses on reprint cards of current managers from their playing days.
That's all folks! One pack of 2012 Calbee = Two cards. I realize they're not for everyone, especially since it's written in Japanese.
But if you're interested in owning a pack of your own, I'll be giving a pack away in the contest I'm running over at my blog: The Chronicles of Fuji.
I hope all of you enjoyed a safe and entertaining 4th of July.
Happy Thursday and sayonara!
P.S. Thank you Ryan for taking the time to pick up and ship those packs... hope you enjoyed the chips. And thanks Andrew for hooking me up with the background information on Mr. Matsunaka & Mr. Hara.

Email ThisBlogThis!Share to TwitterShare to FacebookShare to Pinterest
Labels: 2012 Calbee Baseball Series One

When I saw "food issues" I thought you were going to post some moldy gum or something.

Lol... nope just some old fashion baseball cards that are packaged with chips. Next time, I'll try to find a pack with some "moldy gum".