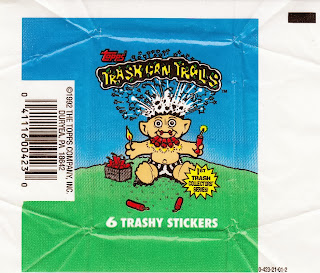 Over the past four decades, I've seen my fair share of fads:  Pet Rocks, Beanie Babies, POGs, Tomagotchi's, Garbage Pail Kids, and Pokemon cards.  Each of them had their time to shine, but these days they fill up hoarders' garages, Goodwill stores, flea markets, storage units, and maybe even some of our personal collections.

In fact, I'm not afraid to admit that I've owned at one point in my life each of the above mentioned items.  But one trendy fad I never partook in was those hideous trolls from the 90's.  I never understood the fascination... and honestly I still don't. 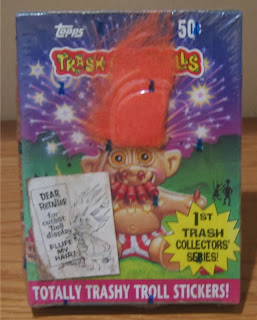 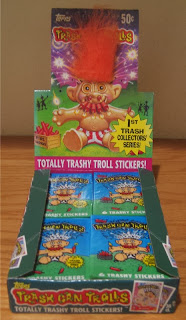 Be that as it may... I've never been able to walk away from a bargain.  I recently stumbled upon a box of 1992 Topps Trash Can Trolls at the flea market.  The guy wanted $5 and I offered $3.  We ended up meeting in the middle and the rest is history.

The box had 36 packs of cards with each pack containing 6 trashy stickers.  As you can see Topps figured it would cash in on the troll trend, while attempting to revive the Garbage Pail Kids fad.  You've gotta love a parody of a parody. 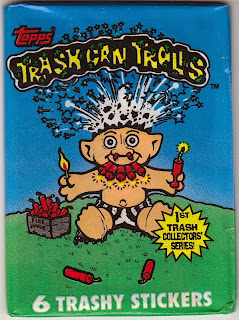 Just like the Garbage Pail Kids, each of the Trash Can Trolls came in pairs.  There were a total of 44 pairs of trolls that made up the 88 card set.

Here's what I pulled in the first pack out of the box:

A quick glimpse at the set I built from this box shows me that 48 of cards have puzzle backs that end up creating four 12 card puzzles.

Unfortunately there aren't four different puzzle designs.  Instead each card pair contained identical card backs, which means card 6a and 6b each had the same puzzle back.

Cards that didn't feature a puzzle piece on the back had either a checklist or a comic coupon.

Thirty-eight of the cards had comic coupons (19 different designs) on the back, while the final two cards in the set #44a and 44b contained the 88 card checklist.

I've read that Topps considered releasing a second series, but cancelled it due to the end of the troll fad.

These days you can find complete 88 card sets on eBay for around $13 (delivered), while a box of 36 packs will set you back $16 (delivered).

This product definitely isn't for everyone... including me.  But based on completed sales listings on eBay... somebody is buying this stuff.

And in case you're worried about offending me by clicking the "Hall of Shame" button below.  Don't.  I was the first guy who clicked it.

Email ThisBlogThis!Share to TwitterShare to FacebookShare to Pinterest
Labels: 1992 Topps Trash Can Trolls

Whoa... didn't notice that until you pointed it out. Don't think Topps would go there in this era.