Written by gregory at 4:00 AM
Today we've got a cellophane pack from the 1988-89 Esso All-Star Hockey Collection. (Front and back shown.) 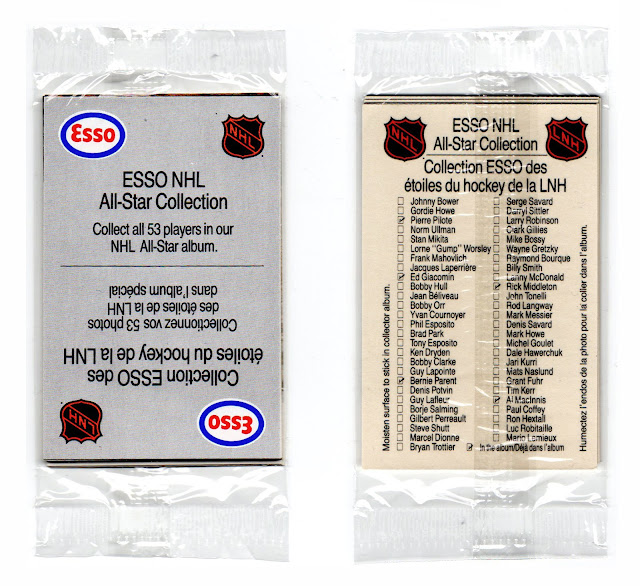 These cards were distributed during that hockey season in packs of six at participating Esso gas stations across Canada. There are 48 cards in the set, and along with superstars of the day like Wayne Gretzky and Mario Lemieux, the set also boasts a handful of legends like Gordie Howe, Stan Mikita, and Jean Béliveau.
So imagine that you’re a kid in the back seat of the car, mom or dad says "looks like we've got to stop for gas", and when you pull into the Esso station, the attendant hands you this pack of cards to open. 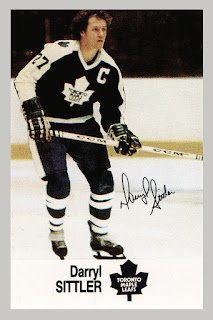 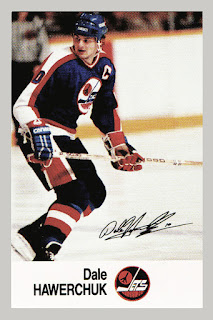 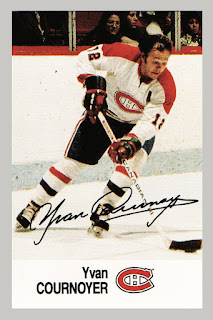 Here we've got our first of three Montreal Canadiens in the pack, Yvan Cournoyer. He’s a Hall-of Famer with lots of Stanley Cup rings (EIGHT!). Nicknamed “The Roadrunner” for his speed, Cournoyer won the Conn Smythe trophy as playoff MVP for the 1972-73 championship team, leading the league in playoff goals (15) and points (25). He fell just a little bit short of 1,000 games played (968), 500 goals (428), and 500 assists (435), but was a stalwart and fan favorite in Montreal for a very long time, and didn't play for any other team during his 16-year NHL career. 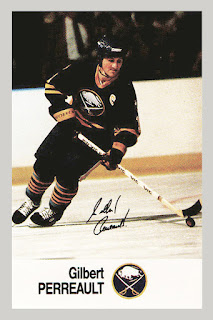 Gilbert Perrault is up next. The 1st-round pick (1st overall) in the 1970 NHL Amateur Draft, Perrault is a Calder Trophy winner and a Hall-of-Famer. In 1,191 games played, he put up 512 goals and 814 assists for 1,326 points. Like Cournoyer above, Perreault spent his entire career with the same team—17 seasons in all. He was part of the famed "French Connection" line with Rick Martin and Rene Robert, named as such because all three players were French-Canadians from Québec. Perreault's 18 career hat tricks place him inside the top 25 all time as of this writing. 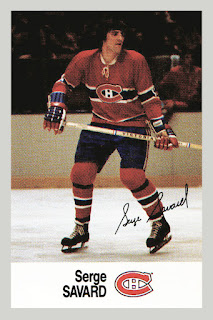 Next, another Hall of Famer, Serge Savard. The defenseman is another 1,000-game player, and he won an impressive seven Stanley Cups during Montreal's powerhouse years in the late-'60s and throughout the '70s. He was awarded the Conn Smythe trophy as playoff MVP for the 1968-69 Stanley Cup team. 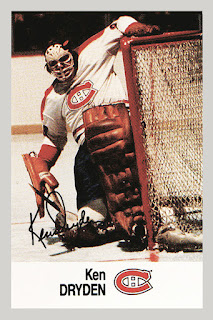 And last in the pack it’s another Montreal Canadien, goalie great Ken Dryden, who didn't have a long career but put up some remarkable numbers during his time in the NHL. His overall record was fantastic, at 258 wins, 57 losses, and 74 ties. In his 8 seasons, he led the league in wins 4 times, goals against average 4 times, shutouts 4 times, and save percentage 3 times. He won the Stanley Cup in 6 of his 8 seasons in the league. 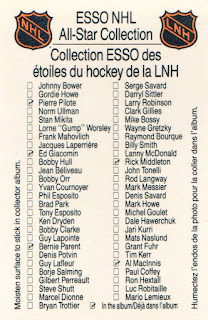 Now here’s an image of a card back. It’s the same for each card in the set, and features the checklist. Interesting to note, Esso issued a collector's album for this set, and the back of each card could be moistened and adhered to the appropriate place in the album.
All in all, not such a bad pack. No mega-stars like Gretzky, Orr, Hull, or Howe, but it was still fun to open.
If you'd like to read more about this set, I blogged about it a few months ago.
Thanks for reading!

Great looking set. I remember seeing these on your blog and running out to find a set. It's been one of only a handful of eBay purchases I've made this year.

Those are beautiful cards.

I'd never heard of Ken Dryden; wow, those are some incredible stats. Short but sweet.

this is a great oddball set. They guy what you wanted out of NHL cards: legends

Thanks for the comments, guys. And nice job picking up the complete set, Fuji!