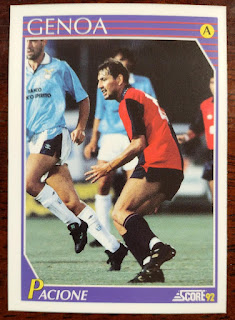 The best actions shots are the ones that feature two opposing players and the ball in the frame. Don't quite have that in these pics, but they are cool shots anyway. 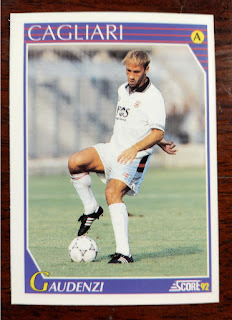 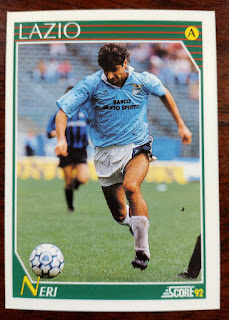 The single shot ones always look like it might come from pre-game warmups or something.
Kind of a necessity sometimes if you're on a time crunch. 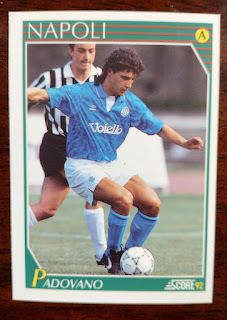 At least this one has a ref in it. Looks like real game action. 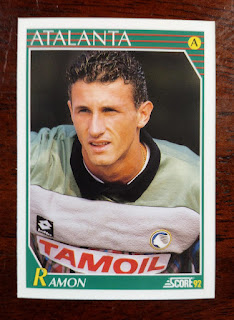 Closely cropped photo like this could be either posed or in-game action.
Even though there were a lot of horizontal action shots, my favorite action card from this pack
was this one of Mazinho. I think this is Portuguese for "Mallet". I guess he's like the hammer of the team. 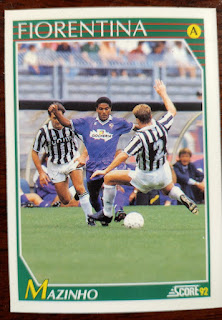 I really have no idea what's actually going on in this pic, but I looks like he's taking out at least one ref in frustration.
Here is the back of that card for reference. 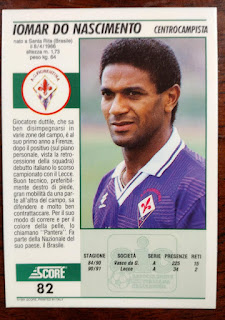 Here is a team captain card. 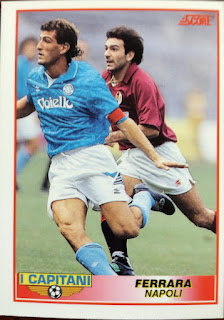 Here's the back.  A good idea to put the team photo on the back of the Captain's card. 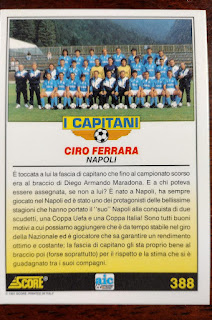 And lastly... a cartoon depiction of Moreno Mannini. 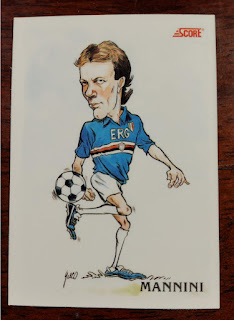 Apparently he won the 1991 National Championship. 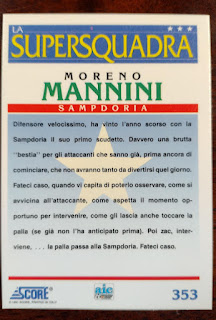 I somehow only got 14 instead of 15 cards. Kind of sucks, but at least I got a couple of cool ones for the "action shot" collection. I really wish cartoon cards were more prevalent in packs these days.

Don't know much about soccer (especially outside of MLS), but this was a cool pack. Very rarely go to Dollar Tree, but I need to make a mental note to keep an eye out for cards.

Used to be a decent selection of stuff. Mostly non-sports with a little Panini soccer stickers, but these days it seems like it's dried up quite a bit.

Yeah, my local Dollar Tree never has cards anymore. I was just there a few hours ago. Got cereal and sausage, but no cards.

In soccer, vertical black and white stripes don't mean referees. Those are players.

Oh that makes much more sense! Thanks Brett.

Never saw this set before but it looks cool