Written by Jafronius at 10:00 AM
Greetings!
Hope everyone is doing well.  So whenever you buy something from the Topps website, you get a certain amount of points that can be applied to future purchases.  I guess they expire after a while, because as my birthday approached I got an e-mail telling me to use them or lose them.  I looked for the cheapest baseball-related thing on the site and stumbled across the Topps Now Card of the Month.  I had enough points to get July's card.
You don't know who the card subject is until you get it...at least the player wasn't listed on the site when I chose it, and I didn't go back to Topps later to see if they revealed the player.  The print run is also limited to (I assume) the number of orders for the card.
I got the card from Topps in a padded envelope earlier in the week, and since I haven't come across a post in the blogosphere from a collector who has gotten one before, I figured I should document my addition. 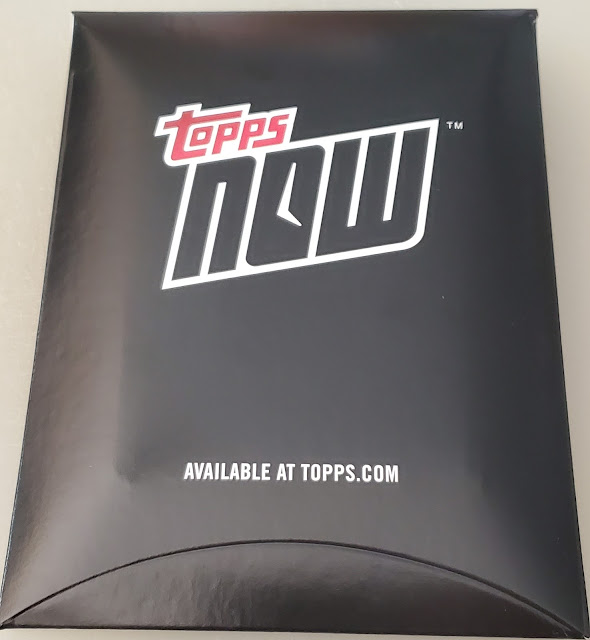 The padded envelope contained the above Topps Now envelope.  The envelope was also covered in padding.
I opened up the envelope after popping some of those padding bubbles (admit it, you'd do it too).  The card came in a small snap case, and had one of those felt pieces in with the card to cushion it against the case.  Who is the subject of the July Card of the Month? 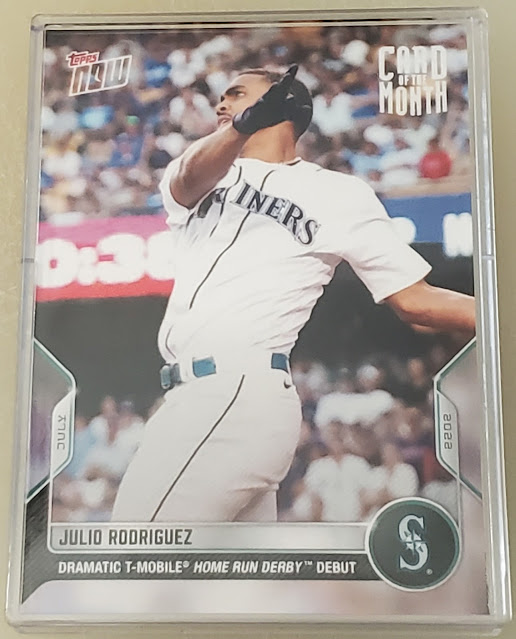 #M-July - Julio Rodriguez
Here's the back.  Sorry for all the glare from the Topps coating on the card: 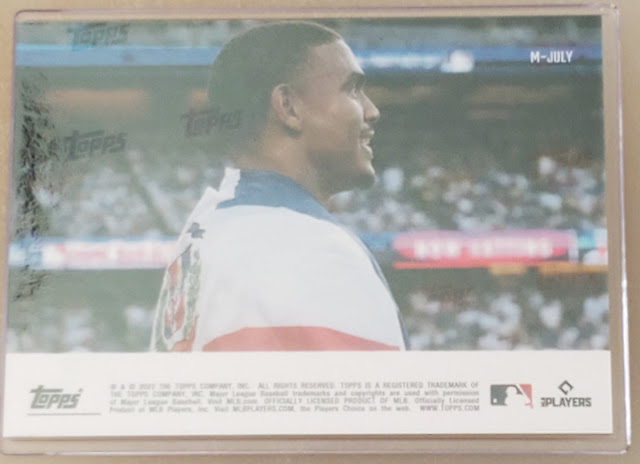 My kid was pretty excited to see it since he was impressed with Julio's Home Run Derby performance:
Anyway, that's the card.  Cardboard Connection has a list of the Cards of the Month released so far as well as their print runs.  If I remember, I'll update this post with July's print run.
Have a safe Labor Day weekend, and thanks for reading!
8/31/22 Update:  A couple of hours after I published the post, I got an e-mail from Topps informing me that they have been made aware of the missing RC logo on the Julio card and will be sending a corrected version soon.  Woo, two cards for July because Hot Rookiez!

Email ThisBlogThis!Share to TwitterShare to FacebookShare to Pinterest
Labels: 2022 Topps Now Card Of The Month - July

Hmm...I think I redeemed points for that card too! Guess I should start watching my mailbox.

That is pretty cool, but I don't like mystery packs for modern stuff. Now if it were a card of the month for Pre 1980s vintage then I would be all over it. But for me Topps Now is only for exceptional plays, events or players or my Homie Team.

I bet the error card will carry a premium. I picked one of a Braves player off of ComC. I think it was May.