Written by SpastikMooss at 2:08 PM
Deathwatch 2000 was not the only set of comic cards that Troll sent me in the package, so today's post highlights the other comic-y goodness: Jim Lee's WildC.A.T.S Covert-Action-Teams: 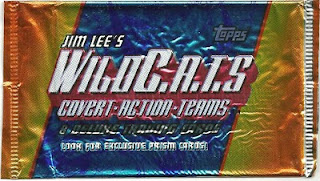 8 "deluxe" cards and the promise of possible prisms...sounds good to me! Let's see the odds under the flap on the back, shall we? 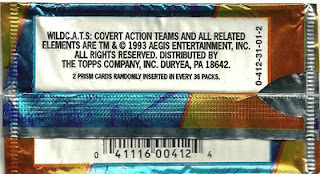 "2 Prism Cards Randomly Inserted In Every 36 Pack." Confusion here. Do they mean the odds are 1 in every 18 but they suck at simplifying fractions? Or does one in every 36 packs contain 2 prism cards while the other 35 contain none? Either way, I didn't get one, so no prism-y goodness in this pack rip. But the subjects in this pack are insane, so I still found it pretty entertaining, starting with the very first card: 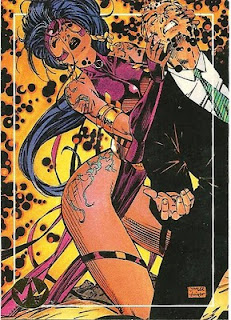 #48 - As with the Mask stickers I covered way back, these card backs have no names. Instead they explain the scene on the front next to a smaller picture, so I'll show you this first one: 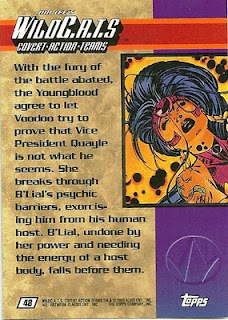 Now, if I have this straight, a dude named B'Lial was using former Vice President of the United States Dan Quayle as a host until some lady named Voodoo came in and forced him out of Quayle's body. As weird as that all sounds, the strangest part to me is that Dan Quayle made it (kind of) on to a trading card. And that's not even his only mention in the set. 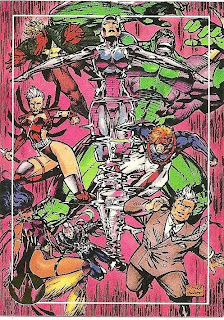 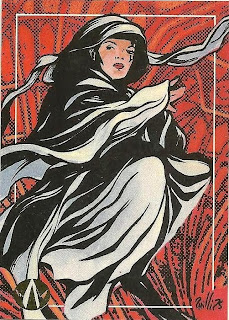 #74 Providence (these ones do have names on the back) - Damn, I should've scanned this back too, but alas, too lazy = too late. The back of some of these cards have rating bars that show which skills each person excels at (think 1996 Topps Stadium Club only vertical instead of horizontal and with weird trippy powers instead of baseball attributes. Providence here has awesome psychic powers and intelligence, but low stamina and strength. Her Cumulative Power Quotient (CPQ) is listed as 4, not that I have any idea what that means. 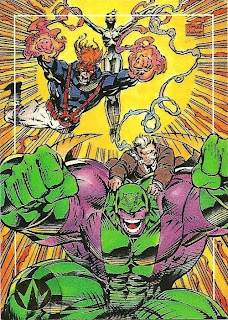 #25 - "Suddenly, Void dimensionally leaps the WildC.A.T.S into the battle, just in time to help Grifter and Voodoo out of a tight spot." - These cards are so confusing to me since I don't know who's who. I think Void is the silver lady in the background though. 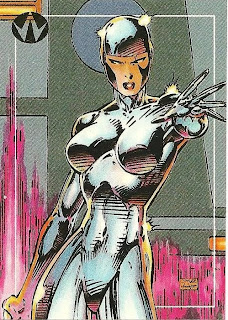 #5 - I was right, this is Void! Nice, +10 points for me! You'd figure this would've been one of those cards with the attribute ratings on the back, but nope, no dice. Weird. 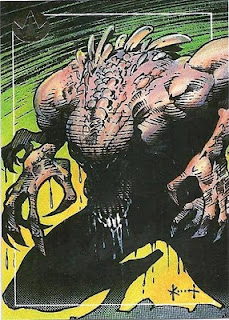 #85 M'Koi - This dude has high stats in everything, but his specialty appears to be intelligence. It's odd though, because he has combat skills listed, which Providence did not. In baseball terms, it's like if Felix Hernandez's 2011 Topps card lists all his peripheral stats while C.C. Sabathia's 2011 Topps card just lists his wins. Can we even compare two guys when we use different stats? Well...yes in the baseball example, Felix rules, C.C. drools. But here...yeah I dunno. Weird set. 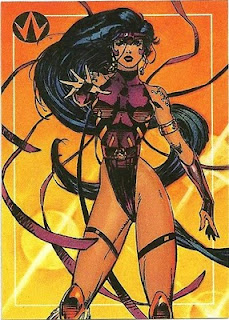 #91 Voodoo - Wait, WHAT NOW? Up to this point we had established that name on back = attributes, no name on back = random card. Well this card has Voodoo's name on the back but it ISN'T an attribute card. Just a random mini bio about how only she can kick B'Lial out of Dan Quayle. Why change card structure mid pack? Or are there tons more cards like this and my 8 card sample is just too small to enlighten me? Again..no clue lol. 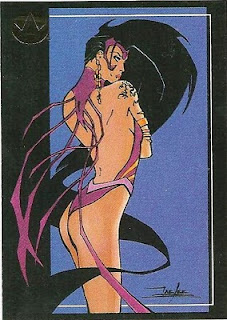 #67 Voodoo (again) - Last card of the pack, and it's a sexy one haha. I'm guessing Voodoo was pretty important to this series given her 4 appearances in 8 cards and her rescuing of Dan Quayle. Then again, that's sort of like guessing Ryan Doumit is important to professional baseball just because you pulled his base card and relic from a hobby box at Target. So maybe I'll withhold my judgment until someone else makes sense of this madness!

Anyways, another fun pack rip...thanks again Troll for the goodies!

I've always been a Marvel Comics fan so I never really got into WildCATS, but I do have to say it looks like this card set is nicely done. No matter what Jim Lee draws it usually looks fantastic.

Voodoo hot pack! Or bip. Or something? Sure was crazy though. I must trade with the good Troll someday.

Never did warm up to Jae Lee's art, though. So flat and two dimensional...like he was the Picasso of the comic world.