Written by SpastikMooss at 3:22 PM
I was a HUGE fan of the XFL back in its heyday, so I recently purchased a few packs to open.  This was the first one I opened, and I think it was a pretty good mix of players so I thought I'd share it here.

As always, first I have to show the packs.  Here's a front: 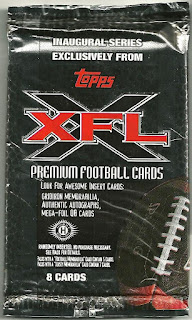 I actually LOVE the way these packs are laid out - tell you exactly what could be in there, how many cards in the pack written nice and big, and they have that neat "Inaugural Series" wording which at the time looked cool and now just is kind of sad since there never was a year two.  Well done fronts XFL.

And here's the back: 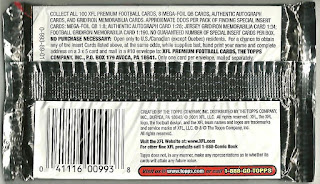 Gives you the rates for all the inserts, of which there are four - a quarterback holofoil card, autographs, jersey piece cards, and football piece cards. The football ones are actually pretty rare and all of these are rare enough that I'll probably just pull base cards, but the base cards are still neat so all is well.  If I do pull some sort of insert, that'll just be gravy!

So let's rip.  Card #1 is Todd Floyd of the Las Vegas Outlaws: 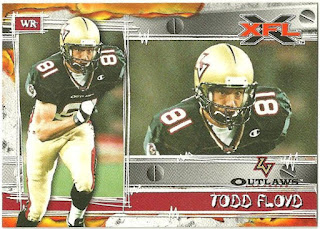 Floyd came out of UNLV, and spent time on the practice squads of the Bills and Jaguars.  He was undrafted in the XFL, and had only three catches for 71 yards in his stint in the XFL.  His greatest one was this back of the endzone touchdown grab.

Card #2 is Rickey Brady, also of the Outlaws: 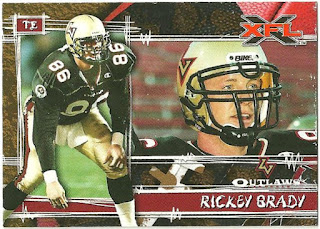 Brady was an NFL journeyman, with one game played (in his 1994 rookie season with the Rams) and later stops with the Saints, Eagles, Cowboys, Buccaneers, Titans, Dolphins, and Scottish Claymores. All this after being first team All Big Eight out of Oklahoma in 1994.

The XFL was Brady's final stop, and he did pretty darn well there.  He was a 5th round pick (overall pick #37) and finished fourth on the Outlaws in receptions with 15 for 158 yards and a team leading 5 touchdowns (good for 4th in the league). 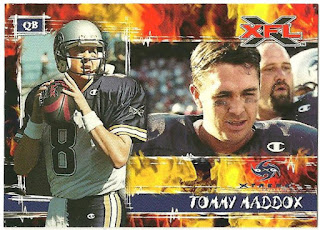 Kind of cool to pull a Maddox since he is the guy people think of when they think XFL.  After playing with 3 NFL teams in 4 seasons, Maddox was out of the NFL from 1995 to 2000.  He then signed as an undrafted free agent with the Los Angeles Xtreme, stole the QB reigns from #1 pick Scott Milanovich before game 1, and then played the best football in the league for the next ten games.  His 2,186 passing yards easily led the league, as did his 18 touchdown passes.  And thanks to that XFL time, Maddox was able to rejoin the NFL with the Steelers, first as a guy who started 27 games over the first two seasons and later as a backup to Ben Roethlisberger.

Card #4 is Zola Davis...nice name there: 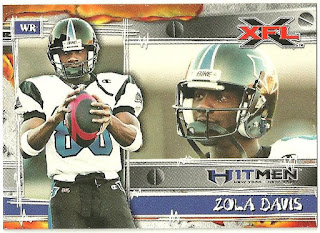 Davis played 6 games with the 1999 Cleveland Browns, where he caught 2 passes for 38 yards and 2 first downs.  Despite that NFL "success," he went undrafted in the XFL and was eventually signed by the New York/New Jersey Hitmen.  The Hitmen were pretty bad but Davis was a bright point, leading the team with 29 receptions for 378 yards and 4 touchdowns (good for 7th in the league).  He also threw a 74 yard touchdown to Kirby Dar Dar on a gadget play, which could easily be the best combination of names to hook up on a touchdown in modern history.

Card #5 is Vaughn Dunbar, who had some NFL experience with the Saints (picked 21st overall in the 1st round out of IU) and Jaguars: 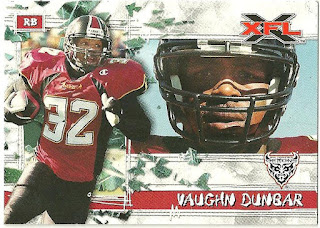 The San Francisco Demons must've looked at some of the Saints' 1992 scouting tapes on Dunbar, because they liked him enough to select him with their first pick of the draft, 6th overall.  Predictably,  things did not go as planned, and Dunbar ended up 4th on the team in carries, with 25 for 29 yards (1.2 YPC) and a long run of 8 yards.  He did add a reception touchdown and some kickoff returns though.  But I doubt Dunbar (or San Francisco) expected Juan Johnson and Kelvin Anderson to lead the team in rushing.  That was one of the kind of cool things about the XFL - you got to see some ex-NFLers who didn't make it for one reason or another, and the XFL gave them a chance to try to make it.  For a Tommy Maddox, the XFL meant cash money.  For Dunbar, it just meant another unsuccessful flirtation with professional football. 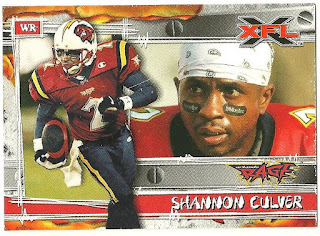 Culver, an Arena League journeyman, went undrafted in the XFL.  He finished 6th on the Rage in receptions with 10 for 165 yards, including a 49 yard touchdown.

Card # 7 is Larry Ryans of the Xtreme: 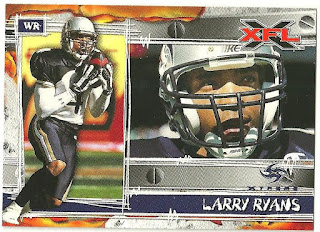 Ryans played 3 games with the Buccaneers in 1996 before joining the XFL (again undrafted, it's crazy how many of these cards are of undrafted guys).  Ryans finished 6th on the team with 11 receptions for 115 yards.

And last but not least, card #8 is Number One Pick Scott Milanovich: 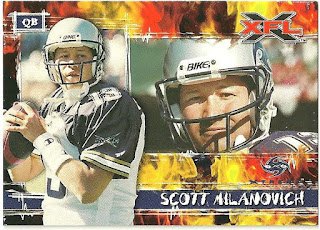 Kind of crazy to be drafted #1 overall and then lose your job to an undrafted free agent who eventually wins the Big Game, but hey, this was the XFL.  Milanovich barely got to play in the XFL's one season, with his final stat line being 2-9 passing for 45 yards with one interception.  He may be the one player in XFL history with a better NFL career than XFL career, as he played one game with the Buccaneers in 1996 where he went 2-3 with 9 yards passing.  He then was a nonactive backup for a few years before the XFL and CFL, and he is now a coach.

On a random note, I wonder if he and Larry Ryans ever chatted since they both played for the 1996 Buccaneers?

I was hoping to pull one of him so much, but sadly none in 3 packs. I did get some cheerleader cards and a 1 in 8 packs QB insert of Mike Pawalski which was neat!