Hope everyone had a fun and safe Halloween.  Bonus points if you bought the good candy for trick-or-treaters and had the fortune of not having many show up this evening!

Couldn't let the day go by without a post, and since The Association is just starting up, it was time to dig up a basketball pack...from the Target discount bin, here's a pack of 2008-09 Upper Deck Basketball! 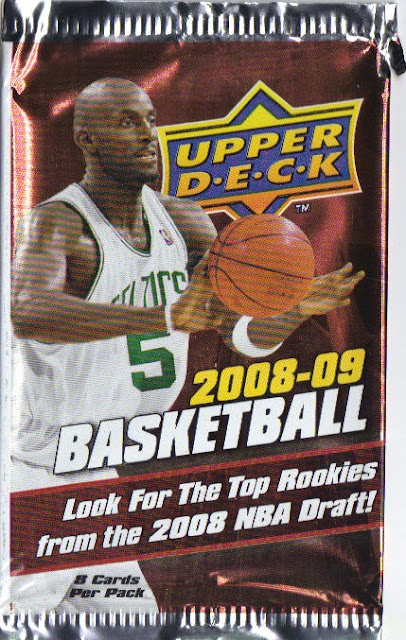 A pack of this stuff has already been posted before, but it's not the same type of pack, so I think that counts here.  The pack appears to be from a blaster box, as I saw no evidence of a bar code on the back.  It's a 266 card set, with cards 201 - 266 the harder to get legends and rookies.  We will not be blessed with a legend or rookie. Here's the pack:

Once again, Upper Deck provides some excellent photography.  The format is a variation of the 2008 baseball release, with a slightly different script for the player's last name.  Depending on the photo, the placement of the name makes it hard to read.

Derrick Rose, Russell Westbrook, and Kevin Love were the big rookies.  Bird, Jordan, Magic, Dr. J, The Admiral, and The Mailman were part of the legends cards. 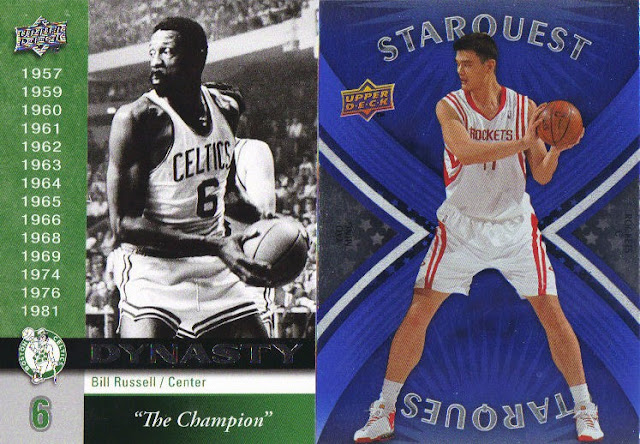 The Celtics Dynasty cards were seeded 1:8 packs.  There was a Bulls Dynasty set as well, seeded at the same ratio.  Pretty nice to get something other than a common Starquest.  They were also seeded 1:8 packs.

Oh, and congrats to all the contributors...Blogger says this is the 1100th post on APTBNL!

Not a bad pack. Good photography and a Bill Russell.