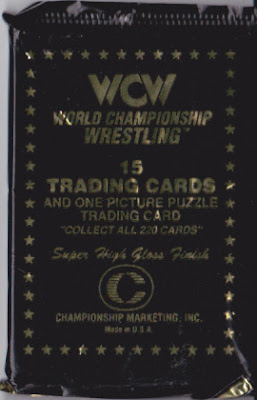 In 1991 this brand called Championship Marketing released the first ever World Championship Wrestling card set. The set featured 110 base cards and whopping 110 puzzle cards. Good luck on collecting those puzzle pieces. After years of trying find boxes or even packs of this set I finally found it at mall in Hayward, CA during family reunion vacation. On to 15 card pack.... 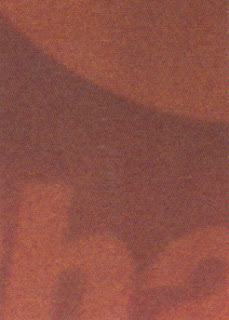 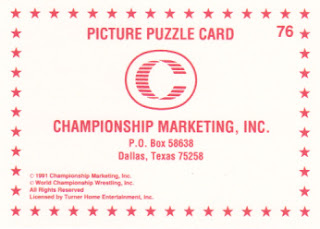 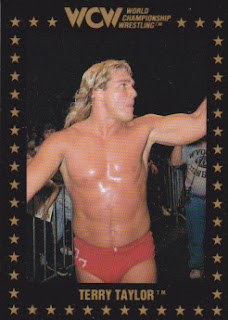 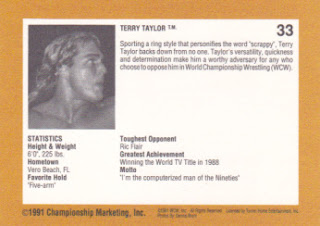 33 - Terry Taylor - it's the wrestler formerly known as Red Rooster. 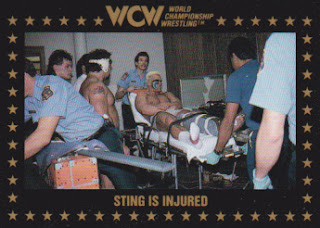 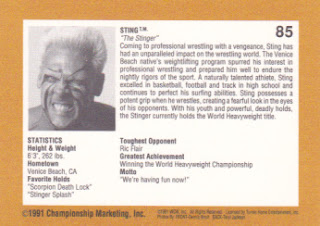 85 - Sting is Injured - horizontal card of Sting getting wheeled out in the stretcher with Rick Steiner looking on. Sting suffered knee injury at Clash of Champions and did injury angle to write him out of title picture. 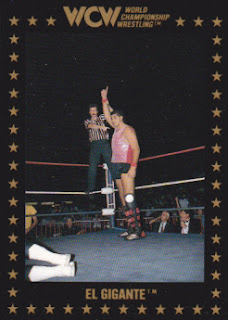 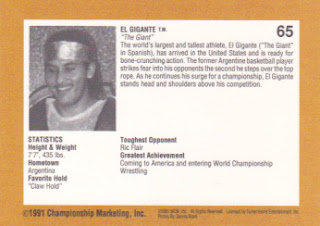 65 - El Gigante - former basketball player was drafted in 3rd round by Atlanta Hawks, but never made the team. Instead cutting their losses then owner Ted Turner decide gave him opportunity to become a wrestler. After wrestling few years in WCW he ended up in WWE with wrestling under the name Giant Gonzalez. He passed away in 2010. 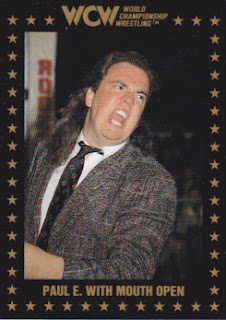 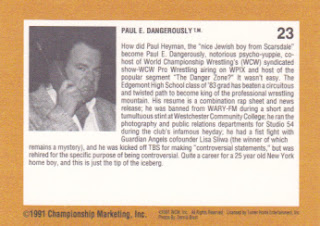 23 - Paul E. With Mouth Open - Ladies and gentleman this is Paul Heyman WITH long hair to his shoulder. Want to know how running wrestling company can take toll just look at this picture then his mug around 1996-97 to his current mug. 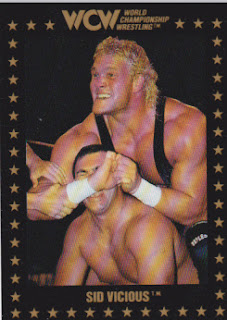 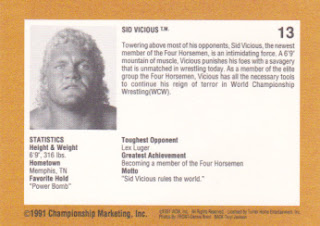 13 - Sid Vicious - its the ruler of the world with crazy rambling even willing insult himself. 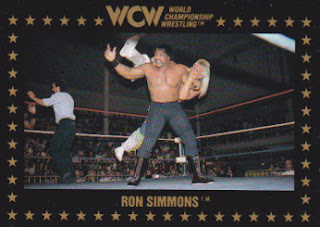 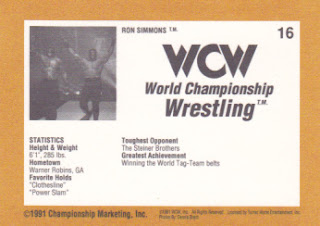 16 - Ron Simmons - DAMN! He got handle of Ricky Morton. At the time he was teaming with Butch Reed known as Doom along with manager Teddy Long. (yes that Teddy Long of Smackdown fame playa) He became first black WCW world heavyweight champion defeating Vader in 1992. He appeared in WWF in 1996 as leader of Nation of Domination then team up with John Bradshaw Layfield known as APA. 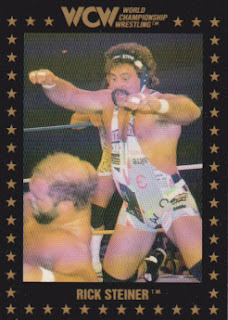 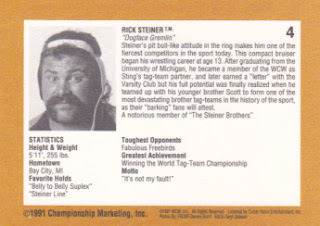 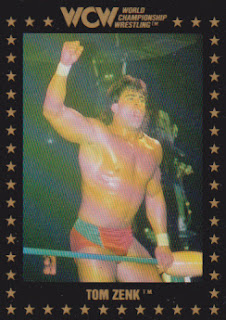 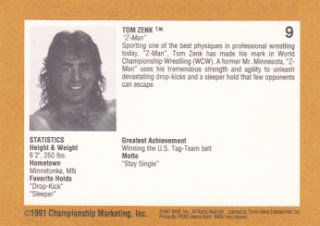 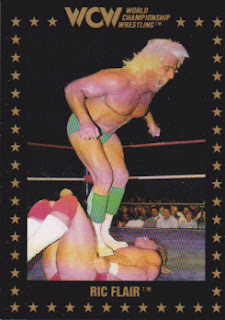 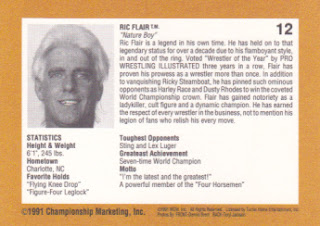 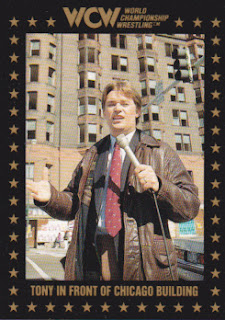 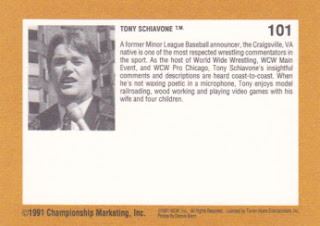 101 - Tony in Front of Chicago Building - Tony Schiavone the voice of WCW til WWE bought them in 2001 and he wasn't part of their plan. Currently broadcaster of Gwinnett Braves. 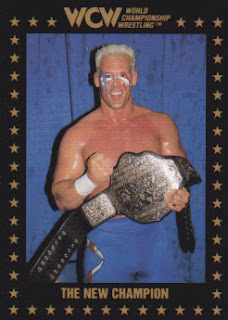 82 - The New Champion - Sting with his newly won NWA/WCW world heavyweight championship belt. He beat Ric Flair to win the belt in July on 1990. 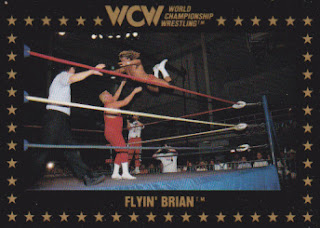 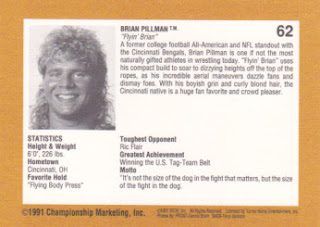 62 - Flyin' Brian - the late Brian Pillman hitting flying crossbody on this nobody in the ring. He would become loose cannon around 1995 and manage con his way out of WCW releasing him to make storyline look real only for WWE to sign him. He passed away in 1997 on day before he suppose to wrestle on PPV. 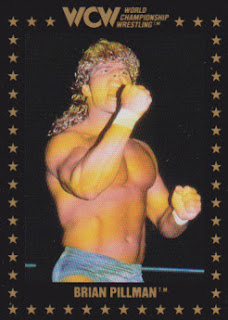 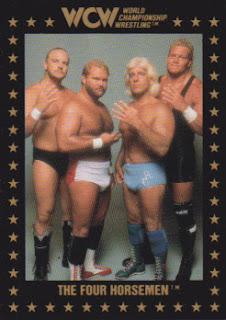 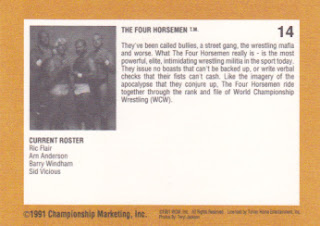 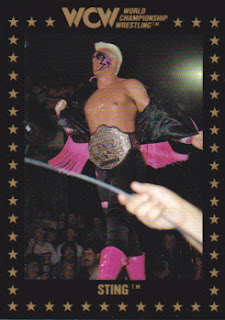 Fun look into first WCW cards produced. I enjoy the black border lined with stars design. For wrestling fan good look back 20 years ago when it was WWF/E and WCW.

I like these so much better that the other 1991 WCW cards that are out there.

Great looking set I never knew existed , I'd own it if I collected wrestling cards , I loved WCW in the 1990's