Hope everyone is doing well.  News broke yesterday of the passing of Marvel Comics legend Stan Lee at the age of 95.  He started in the industry back in 1939, and returned to the business after serving in WWII.  He helped create the Fantastic Four in 1961, and in subsequent years co-created the Incredible Hulk, Thor, Iron Man, the X-Men, Spider-Man, Doctor Strange, Daredevil, the Silver Surfer, and Black Panther, among many, many others.

To mark the passing of the pop culture icon, here are a couple packs of the 2017 Upper Deck Marvel Annual! 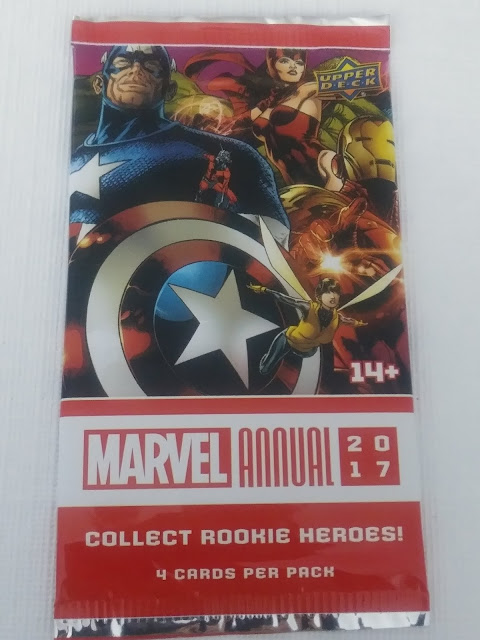 Upper Deck started this run last year with the 2016 Annual, which is meant to recap the year in comics (which is why the 2017 Annual was released this past spring).  I saw Hobby boxes of the release at the LCS a while back, but didn't think about getting a pack back then.  When on a Dollar Tree run over the summer, however, I noticed them among the repacks so I decided to get 2 for the site.  There's 4 cards per pack (5 cards in a Hobby pack).  Here's what I got: 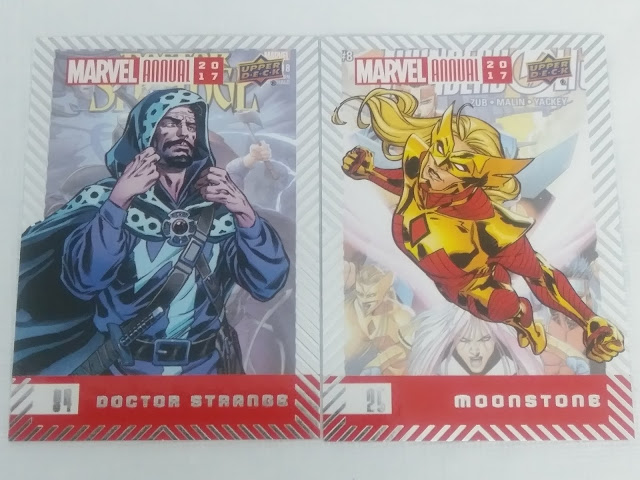 A Stan Lee creation starts off the pack.  Since I don't read comics, I assume the images are pulled from the comic books themselves.  The comic book cover appears in the background, with a simple border and the card number in the lower left corner. 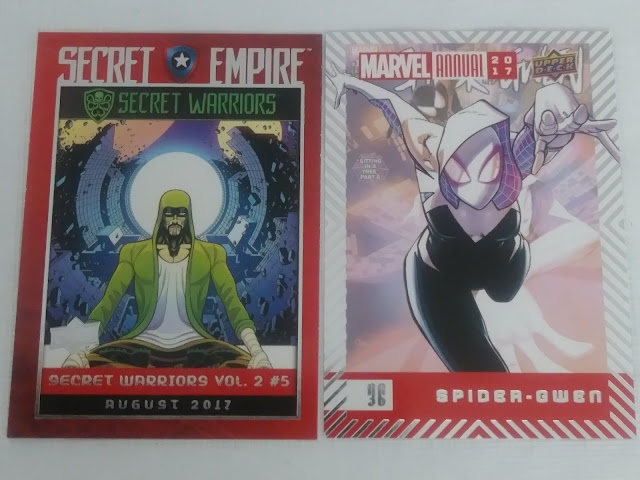 The Secret Empire Comic Covers Set subset is 40 cards and comes 1 in 2 packs, but I'm not sure if that's Hobby, Retail, or both.  You can find the checklist here.

Here's the back of the 4 cards: 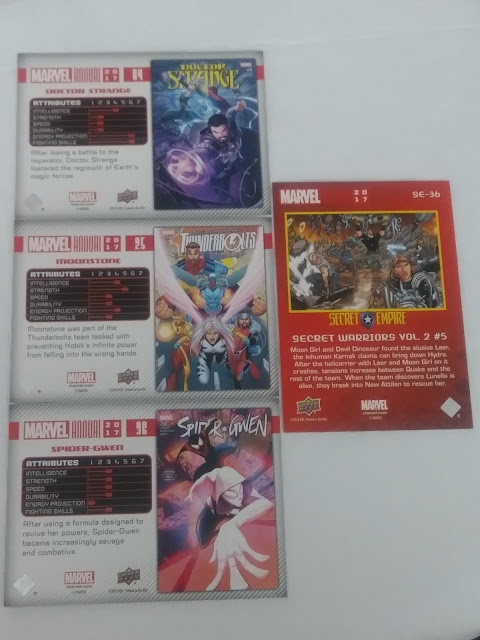 You get to see the card number again, as well as the featured comic book cover (the same one that's in the background in the front of the card), the character's stat sheet, and a quick summary of what happened to that character in the issue.

When taking pics of the cards for the post, I noticed that the back of the pack is a continuation of the image from the front.  It's very much like those multi-comic book issues that when put next to each other forms one impressive portrait.  Here are the 2 packs together: 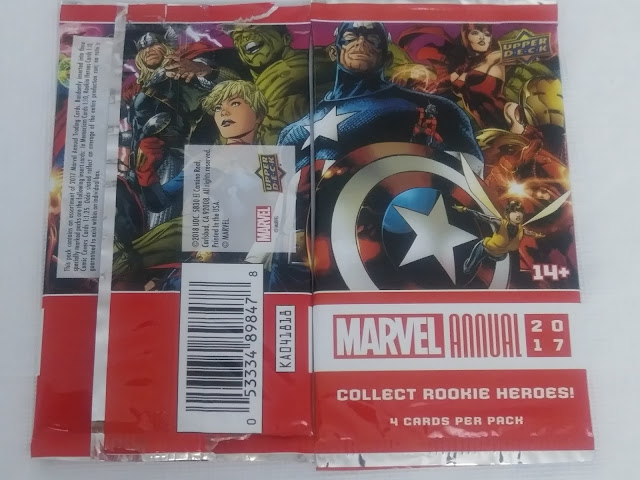 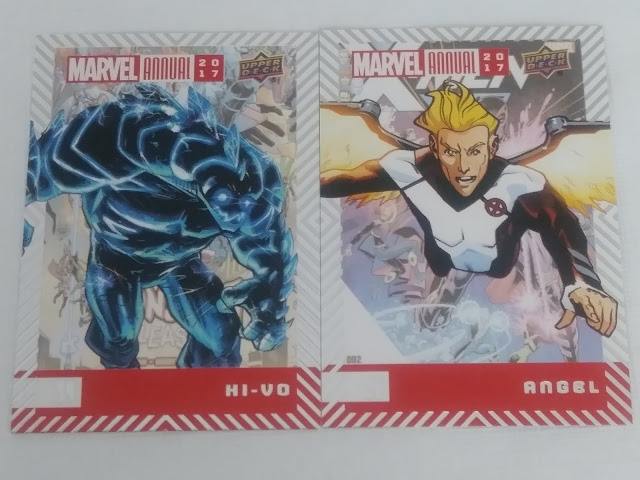 According to the Marvel Wiki, Hi-Vo is the creation of an Inhuman who possessed the ability to bring monsters he drew to life.  OK then.  Angel is another one of Stan's creations, one of the original X-Men. 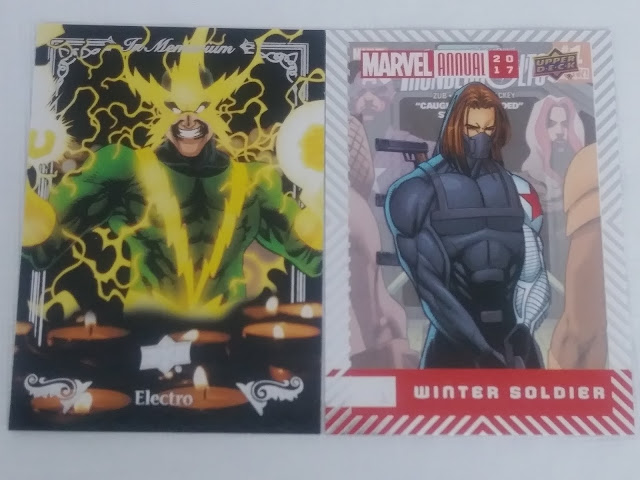 There are 5 cards in the In Memoriam checklist.  The back of the pack says they come 1 in 10 packs. 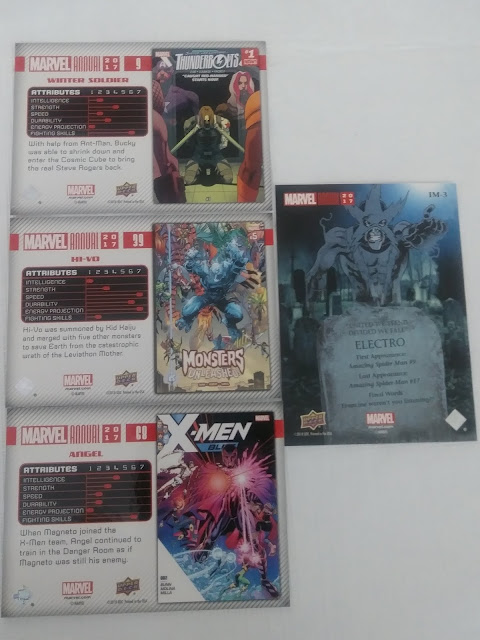 Anyway, those are the packs.  They are very reminiscent of the old Marvel sets from the 90's, some of them can be found here on APTBNL.  I'm thinking it's just as good to get the dollar packs since you're only losing 1 card when compared to the Hobby packs, and the "hits" in Hobby packs are artist sketches and patches (I'm not into those types of "hits" though).

RIP Stan...thank you for all your contributions to pop culture.  Your work will help fuel the imaginations of fans for generations to come.

Definitely sad with Stan passing. I used to love all the comics cards. Nowadays I really want to like the new stuff but I'm finding it hard to do so. These are OK to me but no wow factor.I want to open some Infinity War movie packs but haven't had the chance yet. Good post as always.

I've recently discovered these Upper Deck Marvel Annual sets and I think they are great. Then again, I'm still an avid comic reader/collector so this type of set is right up my alley.