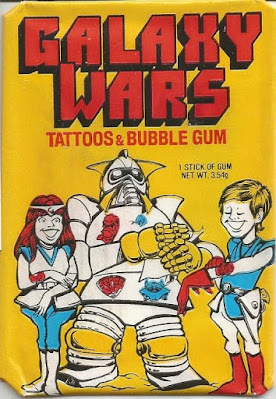 Today, we step back in time to a galaxy far...er, I mean we step back to 1973 (I have seen these listed as 1973 and also 1981, so...). Donruss released a set of tattoos in wax packs. One of the unique features of the set: it came in three different colored wrappers. We have the yellow variety above, and here are the red and blue ones:

Honestly, it makes way more sense that these would be circa 1980-something because the guy in the mask bears an uncanny resemblance to several other masked space characters of the time. The wrappers themselves are true wax packs of the day. And, yes, there was gum inside. I did not scan the gum. Sorry, folks.
Inside each pack, an instruction sheet told you how to put the tattoos on yourself (well, I suppose you could put them on anyone, but usually this was a personal activity). 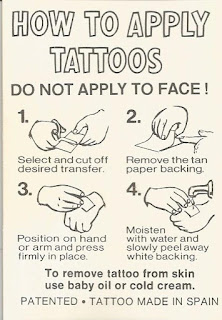 As you can see, these were made in Spain. Also, we were warned: DO NOT APPLY TO FACE! Pretty sure that meant tons of little boys were wetting the thing and then running up to their sisters and slapping them in the face with these... I digress.
The tattoos themselves were attached to a brown paper protective sheet: 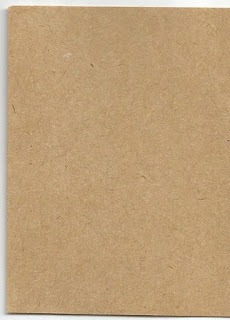 When you peeled the protection away, it revealed the set of tattoos your pack contained. Now, the actual tattoos were attached to a thin white (or off-white) backing. This had the "cut lines" to separate the three sections for application. It also says, "Collect all 40 sets." I could not find a checklist nor a photo of all 40 sets. 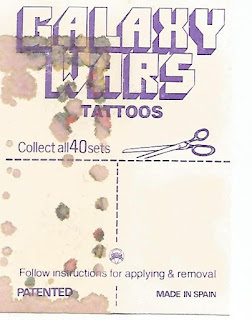 The stains you see (and will continue to see in the images below), are where the gum adhered to the backing of the tattoos. This is most unfortunate as it means that where there is a stain, the tattoo had pretty much stuck to the actual backing. More on that in a moment.
Once you peel the brown sheet off, you can see the tattoos. Again, where you see stains, that is where the gum bled through the backing onto the tattoo: 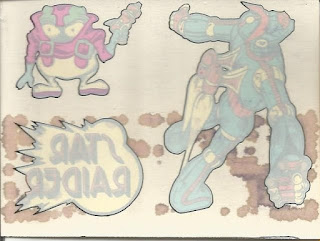 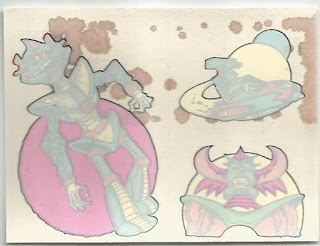 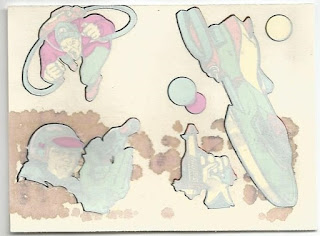 In an effort to show what these might look like when applied, I flipped them and did some very crude photo editing. What I didn't realize until a little later was that these are actually MUCH more vibrant when applied than I could have imagined. But, these are the same images above, just flipped and retouched: 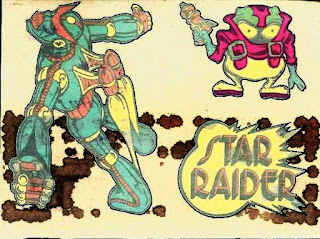 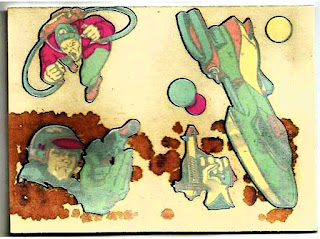 I decided I wanted to see what these looked like when actually applied. This was an exercise in futility. Where the gum had seeped through the backing, the tattoo was attached to the paper and would not release. I also forgot just how much patience one needed and how long it takes for the actual tattoo to separate. I eventually decided to try attaching the tattoo to a clear plastic holder in hopes I could manipulate the backing and the surface to get a nice, clean exhibit. Nope. So, this is what we're left with: 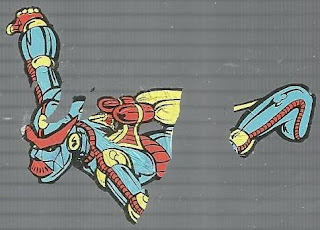 As you can see, this thing is bright and very detailed! I am amazed that after all these years, these could still look pretty good - so long as you aren't fighting gum stains.

Very cool. I wonder if the creators of Battlestar Galactica based their cylons on the robot on the wrappers.

That broken image effect is actually very cool in itself. If you applied a load of these to a cheap canvas then it would make a great piece of kitsch art.

BLUF: I don't there's any way that this set was produced before 1978, and that anyone who says so is in error.

Longer Version:
Cards (almost) never lead the way in pop culture -- they follow it and license it after the fact.

- Dead ringer resemblance of robot guy on two packs to a classic Cylon from the original Battlestar Galactica (1978).
- The "Galaxy Wars" name is too on-the-nose to miss as a riff on Star Wars. That movie single-handedly shot energy into long-moribund SciFi stories in 1977 (Close Encounters helped, too). After that, space opera "Whatever Wars" clones of all kinds of things got produced.
- The boy kid on the packs has a mild resemblance to a Luke-ish character, albeit in clothes that more resemble citizens' garments in Logan's Run (1976).
- The girl kid on the packs is a small stretch to a "Princess Leia" head nod, although she is also dressed in more toga-typical Logan's Run clothing of the era.
- The pairing of the boy and girl kid easily implies a "Luke and Leia hanging with a Cylon putting tattoos on each other" vibe.

External evidence:
- Boxes of the product on sale on eBay show a pack price of 15 cents, and have the lower-case "d" logo for Donruss. This is nearly identical in box design/layout and pricing of 1977 Donruss Saturday Night Fever, 1978 Donruss Kiss, and 1978 Donruss Elvis.

- For slightly later comparison, 1979 Donruss Rock Stars and 1979 Donruss "ChiPs" packs were marked at 20c each.

My Conclusion:
This product was almost certainly released in 1978, not 1973. It also wasn't released in 1981, but product like this certainly lingered on shelves for years to that point.

Donruss totally wanted to ride on the coattails of both suddenly hot SciFi pop culture properties, right around 1977-1978.

Topps was flying high with their five series of licensed Star Wars cards, and Donruss wanted something that looked kinda similar sitting on shelves right next to them, with a little cheaper price on it.

However, they needed to make it as cheaply as possible (no property licensing) and only as an adjacent competitive product to Star Wars cards with generically SciFi-themed tattoos (not even stickers).

These are almost definitely from 1978. Some collector or dealer probably misread the "8" as a "3" sometime, and then the dating error just grew organically from there.

"It's like an 8 that somebody cut in half vertically!"