Written by Jafronius at 10:22 AM
Greetings...
Hope everyone is doing well.  Today is the one year anniversary of The Virus being declared a global pandemic.  Let that sink in...a full year of this crap.
We've been in the low '60s for the last couple of days in suburban Chicago, so spring is definitely on our minds.  Spring training is in full gear, and since my current cable subscription does not include MLB Network, I traditionally get my hype by buying packs, but you all know how it's been.
I try to stop into the Target closest to my work once a week, usually Thursday night.  I've basically given up trying at the Target where I work at part time, because I've seen the build-up to the vendor visit there and it depresses me.  Anyway, the close-to-work Target has a sign up limiting the guest to one pack of cards per purchase.  I don't know if it's enforced during the day, but the one night I was there it wasn't, because I was able to grab 2 packs of Series 1 from a lowly, 25% full display box.
Do I feel guilty for double dipping?  A little bit.  Then again, we all know to whom those signs are directed to, and I'm not one of them.  Maybe if they had blasters or hanger boxes I would have grabbed just one, but common, you can only buy one $3 pack? 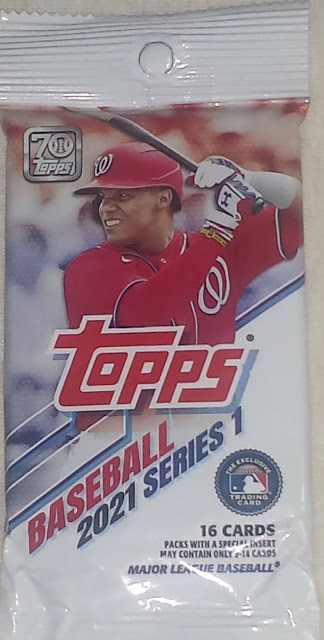 So there it is, 3 bucks for 16 cards.  Not even the Target exclusive with an insert set of some player (if they even did that this year).  Let's see what I got: 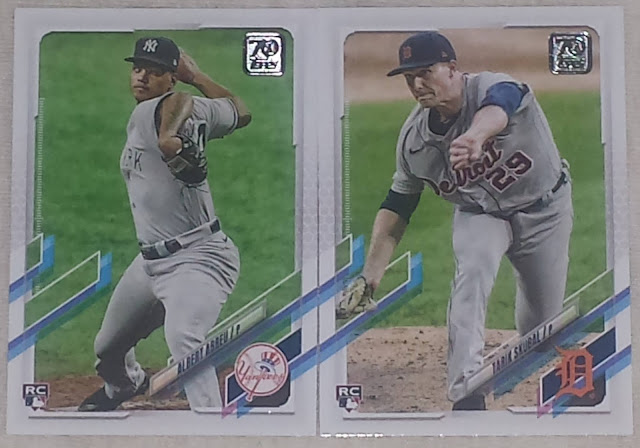 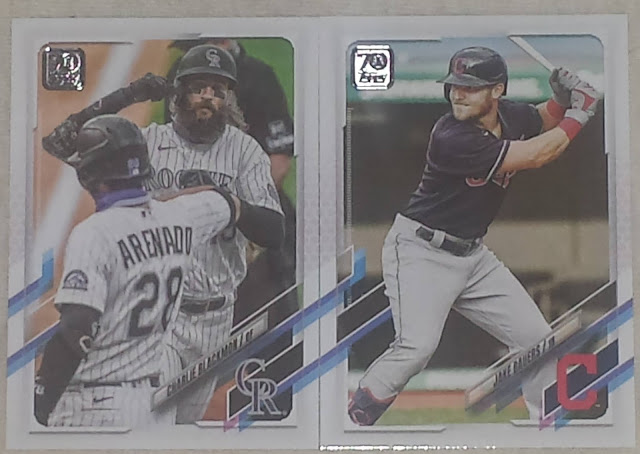 #68 - Charlie Blackmon
#176 - Jake Bauers
Nothing really needs to be added to the blogosphere consensus on the 2021 Topps design.  Yes the slashes are distracting and make it seem Donruss has a MLB license again.  Yes, we're back to many cropped images.  Yes, at least we got borders again.  Heck yes, the nameplate is too small. 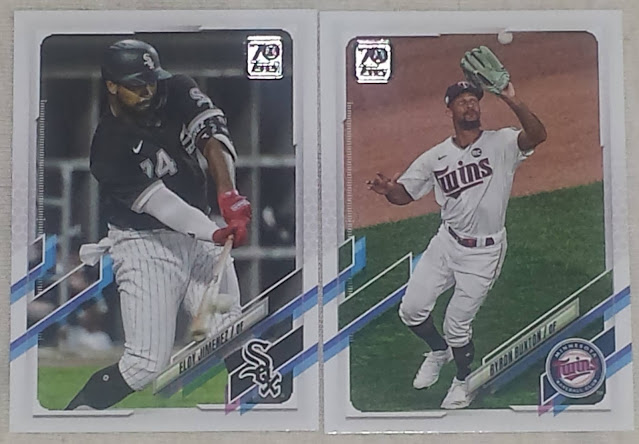 #284 - Eloy Jimenez
#74 - Byron Buxton
Here's the checklist for those who are interested.  The Parallels section says there are Blue parallels for Wal-Mart and Purple parallels for Meijer.  So...no Target Red or Walgreens Yellow?

#301 - Buster Posey
#113 - Nate Pearson (RC)
#224 - Vladimir Guerrero Jr.
You almost miss that RC logo at the bottom corner.
I didn't scan the back of the Posey card.  For inquiring minds, for 2020, Topps listed "Did Not Play - Opted Out".   100 years from now some new collector will look up Buster's stats and wonder why would he opt out of baseball. 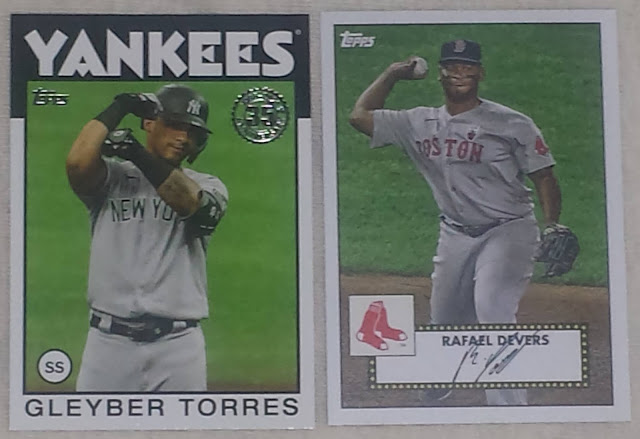 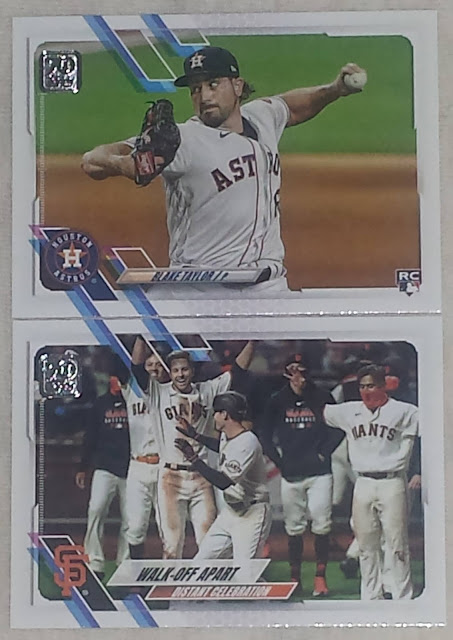 #228 - Blake Taylor (RC)
#258 - Walk-Off Apart (Checklist)
The blogosphere is pretty even when it comes to masked players.  I prefer to see it (and the cardboard fans too).  Cards are supposed to remember the year that was, and masks and cardboard fans were a part of it. 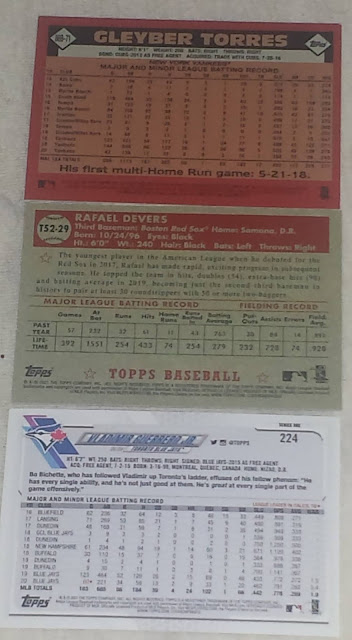 Full stats are there so that's cool.  What's not cool?  See those 2 little black slashes between the write-up and the stats?  I thought those were dust or something at least half a dozen times.
Anyway, that's the pack.  Will I get more, considering most of us aren't fans of the release?  Of course I will if I get the opportunity.  When that will be, though, remains to be seen.
Stay safe, and thanks for reading!
P.S. (March 12 8 A.M. Central Time)  I stopped at the Target on the way to work as scheduled.  Nothing in the card aisle, but success in the toy aisle!  There was a side cap display 90% full of Series 1 hanger boxes.  I got 3.  Yes, still felt kinda guilty, but technically there was no signs limiting guests on the side cap display...and I'm still not a flipper.  So kids, take a hint from ol' Jafronius:  check the toy section too!

I'm not a fan of these smaller packs but I did get lucky finding blasters and hangers. Not a bad pack. I really like the Blackmon. Hope some blasters or hangers are in your future.

Thanks for the pack post. Sometimes I get a hankering to rip something, but the shelves are pretty bare around here, too. It's nice to live vicariously through the blogs for my pack ripping needs.

Saw about 15 hanger boxes of 2021 Topps baseball at Target today, but no blasters. I was gonna grab a box, but decided against it. I'd rather just pick up singles I really want.

Crazy, it does sounds like there are still some out there in the wild for those that look.