Written by Jafronius at 7:52 PM
Greetings!
Hope everyone had a fun New Year's celebration.
I ended 2022 with a colonoscopy and then began 2023 with my second bout with The Virus (I first had it back in early June).  Symptoms weren't so bad, just like last time (headache, fever, sore throat at first, but then just a cough).  I spent the first week of the year quarantined in my basement, working from home, and spent the second week back in the office all masked up.  I did notice this go-around that I've been pretty wiped out when I got home from work, so maybe fatigue is a symptom for this strain (either that, or it's still the whole 3rd shift thing). 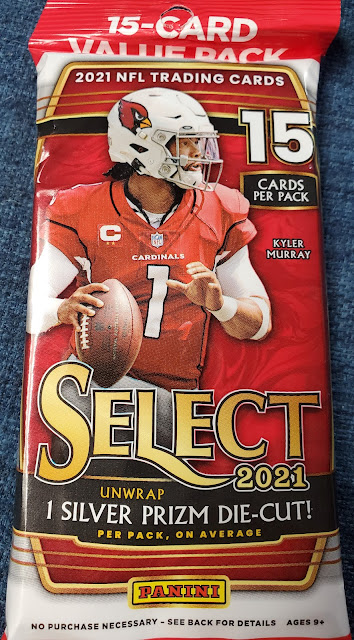 Panini released 2021 Select in August 2022.  Yet another set from last year released this year.  Seriously, there's has to be some catching up to do this year.
I picked up a pack last month after the vendor restocked the Target card aisle.  It was $15 bucks for the Value Pack, so a buck a card.  Probably not worth it, but here's what I got: 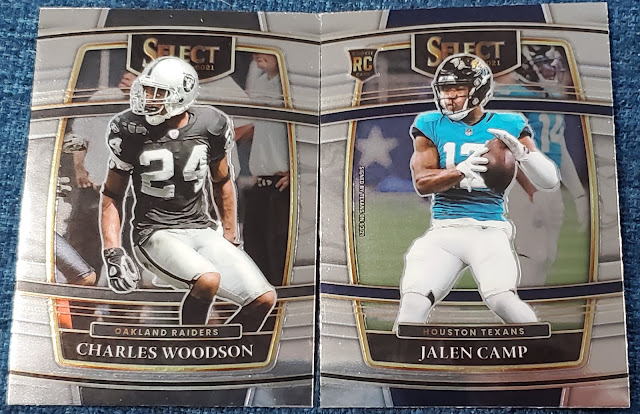 #40 - Charles Woodson
#97 - Jalen Camp (RC)
There are 400 cards in the set, divided into 4 "levels" (rarity).  There are apparently 25 additional XRC Prism cards tacked onto the end of the set.  Woodson and Camp belong to the Concourse Level (the first 100 cards). 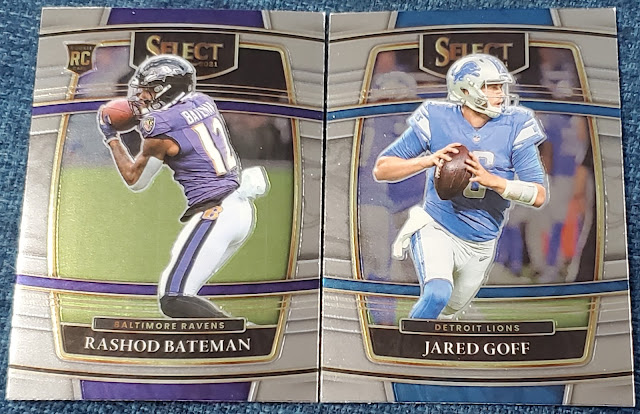 #55 - Rashod Bateman
#13 - Jared Goff
Quite a turnaround for the Lions this year.  Goff also led one of my Yahoo Fantasy Teams to a Public League title (he led my main Yahoo Fantasy Team to a 5th place finish after Kyler Murray got hurt). 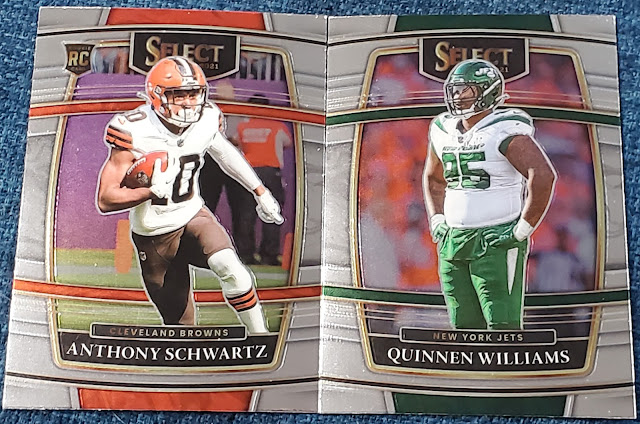 #70 - Anthony Schwartz
#27 - Quinnen Williams
Schwartz had an injury filled rookie season and his sophomore season wasn't much better.  Hopefully the third time's the charm for the guy. 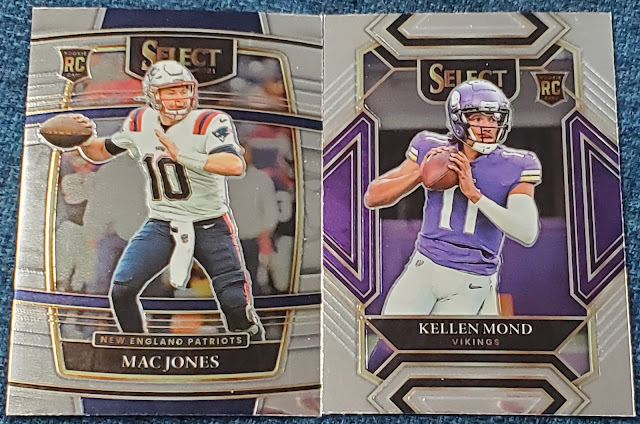 #51 - Mac Jones (RC)
#264 - Kellen Mond (RC)
A lot of the same players pop up in the different "levels," like Kellen.  The different border means a different rarity, in this case the Club Level. 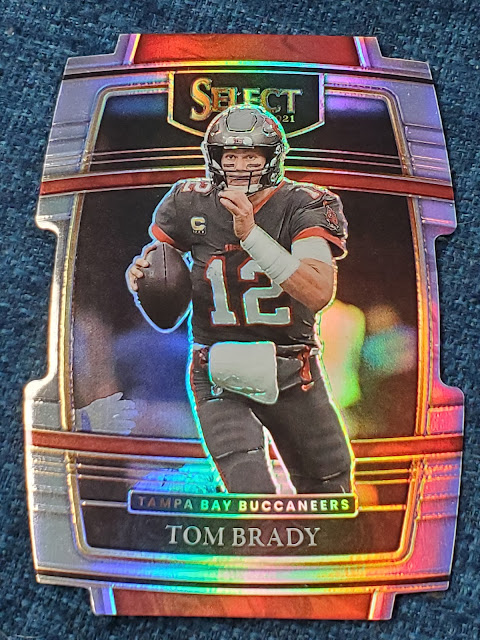 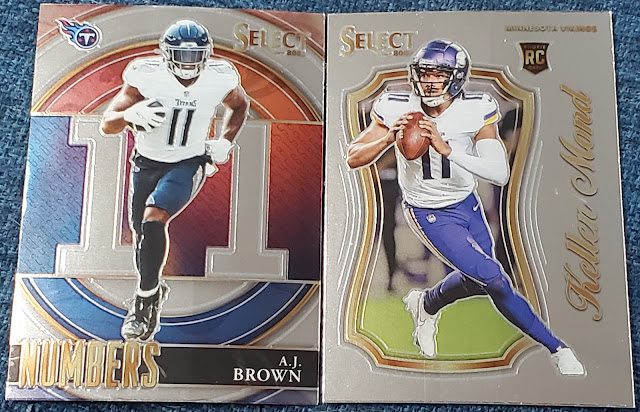 #SN-25 - A.J. Brown (Select Numbers)
#SCR-6 - Kellen Mond (RC) (Select Certified Rookies)
We've hit the inserts portion of the pack.  As we all know Panini never gives us the odds, so who knows how rare these are.  Also, Kellen Mond hot pack! 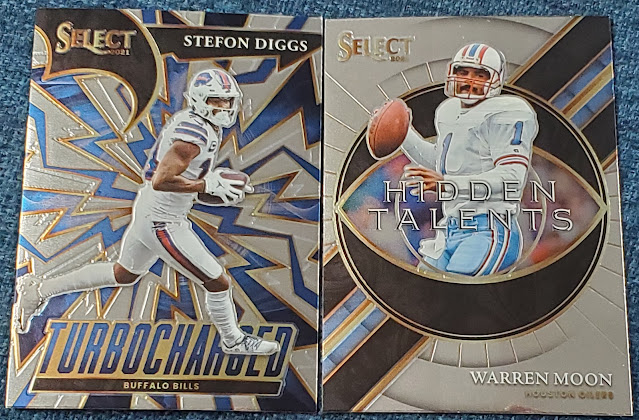 #TUR-13 - Stefon Diggs (Turbocharged)
#HT-19 - Warren Moon (Hidden Talents)
The Turbocharged insert is pretty nice looking.  The Bengals play the Bills this weekend; should be pretty emotional...maybe Damar Hamlin will make an appearance to pump up the crowd and his teammates. 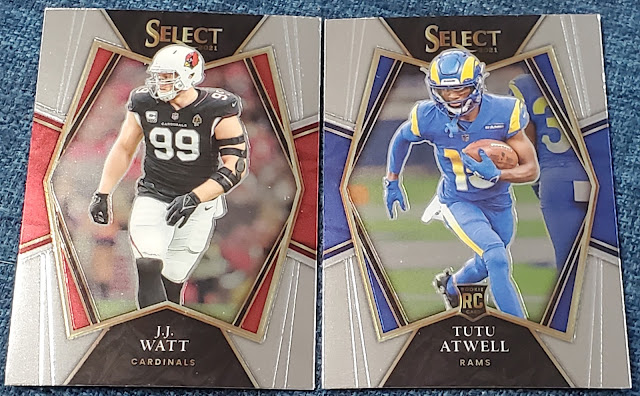 #103 - J.J. Watt
#161 - Tutu Atwell (RC)
These two are part of the Premier Level.  J.J. Watt announced his retirement; he'll probably wind up in the Hall of Fame.
Here are the backs because football: 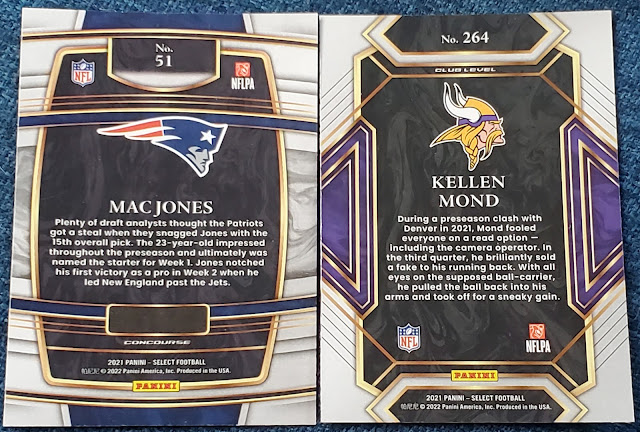 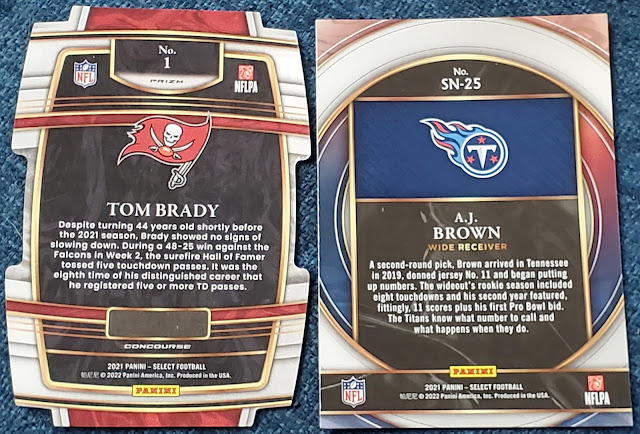 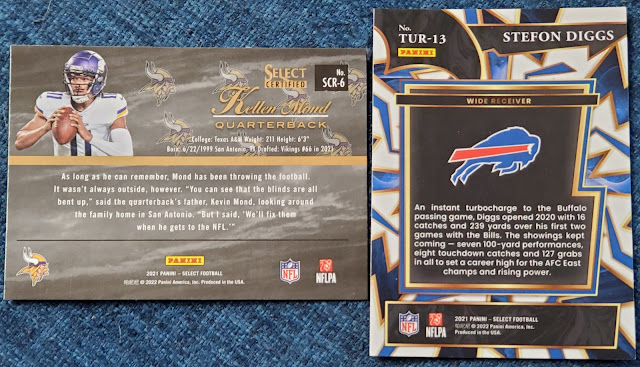 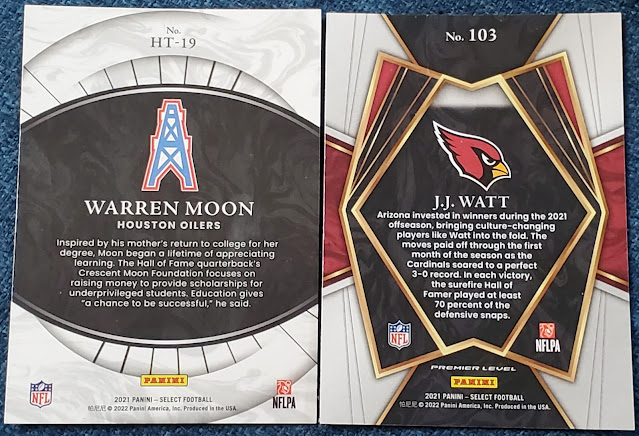 Anyway, that's the pack.  I don't think it was worth a dollar a card, but shiny cards are cool, so this was a one and done for me.  Enjoy the weekend, and thanks for reading!

I agree with you $15 a pack is quite a bit to drop for that and soooo many inserts!