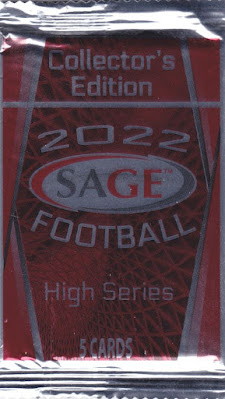 I can never figure out if it's supposed to be SAGE or Sage. And what happened to "HIT"? Also, why are the letters in "SAGE" printed in two different colors? I have so many questions. Here's what I do know. I ended up with this pack inside of a repack football box from a Walgreen's somewhat recently. It seems that Fairfield, the company that puts these out, must have run out of their supply of buy-back football cards, because pretty much everything in the box was a recent Sage (sorry, SAGE) card, and the bonus pack inside was... this. I actually didn't totally mind this, as I don't collect a ton of football and am much more interested in the college game than the NFL, but I can't see myself ever buying packs of SAGE on my own. 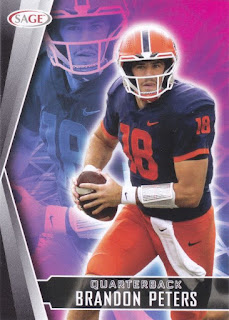 186 - Brandon Peters - You can see that this design is... busy. Peters started off at Michigan before transferring to Illinois, but ended up going undrafted and doesn't appear to have caught on with anyone this season after failing to make it with the Chargers. 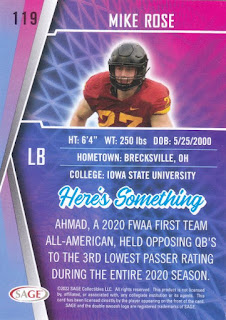 119 - Mike Rose - Instead of a "fun fact" on the back, the blurb is titled "Here's Something". Well, here's something about Mike Rose: he was drafted by an XFL team recently. I guess that means he's going to play in the XFL, if there is such a thing. 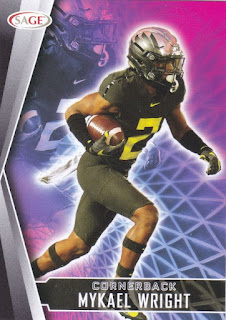 118 - Mykael Wright - As far as football cards go, Oregon Ducks cards are kind of my thing, so I was happy to get this one. Wright was a 3-year starter at cornerback and will also apparently be some sort of XFL player whenever that league does its thing, if it hasn't folded yet. 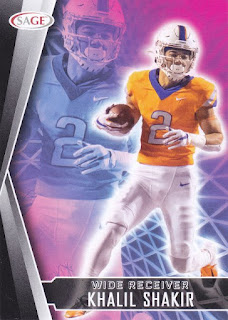 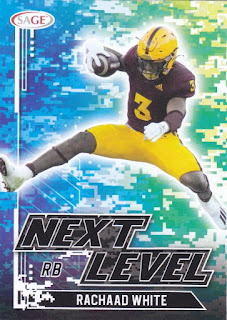 87 - Rachaad White - This Next Level subset has a different color scheme, but it's still pretty wild and out there. White went to Arizona State and plays for the Tampa Bay Buccaneers these days.