Written by JediJeff at 12:30 PM
Diving pack into the scan folder, we pull out a pack of Press Pass NASCAR. If I recall, I saw this in a bin at a dollar store, so I took the chance it was missing from APTBNL. Sure enough, it's missing now more. Shame that Press Pass no longer exists. I know a couple guys at my LCS that are huge NASCAR collectors, so it will cut into what they enjoy. 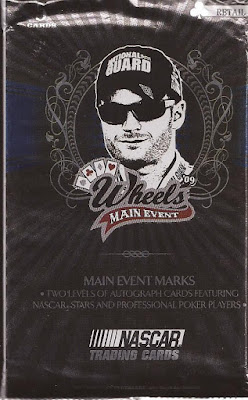 Sure, my scanner didn't pick up on this well, but it is a black pack after all. Dale Jr. gets the cover (doesn't he get damn near all, like Crosby does on NHL packs). When I ripped this, it was an interesting premise for a card set. 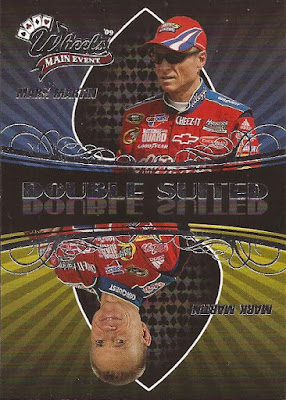 Yeah - wow! But that's not the part I mean by interesting premise. If you pick up the design as well as the insert name (yes, this is an insert - I think), the set is based of playing cards and gambling. You can see the suit cards on the logo in the upper left. Plus, those spade backgrounds are pretty hard to miss. This card plays of like a face card from a deck. Busy as all get up, but with the idea of the set being playing cards, a card like this is expected. 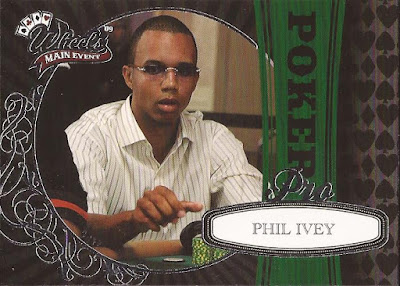 And here is the gambling part, with poker pro Phil Ivey being in a NASCAR set. Maybe it's just this set, but man - Press Pass loves it's scroll work foil. It's everywhere. 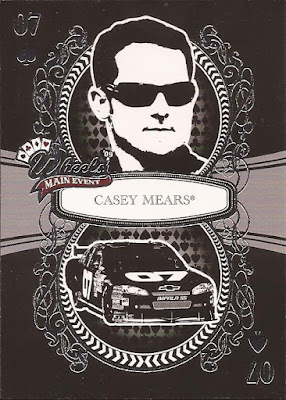 I'm taking a guess this is the base card. I really don't know. But you have the driver in some really washed out, over exposed B&W images, with his ride below in the same look. The "card" number is his car number. Don't forget more scroll work designs. 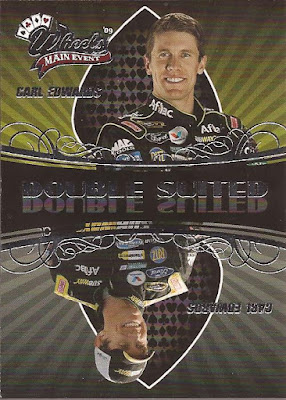 I'm not sure if the base design of the double suited is always a spade. At least the background colors change. I'm going to say that this insert set will always have two pictures - one with a cap on and one without. But what do I know? 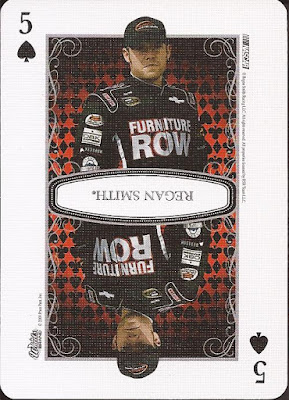 THANKS GOODNESS!!!! As Panini Golden Age did a couple years later, Wheel Main Event does allow you to build an entire deck of playing cards. No idea the insert rate (I long tossed the wrapped), but this would be fun to complete. 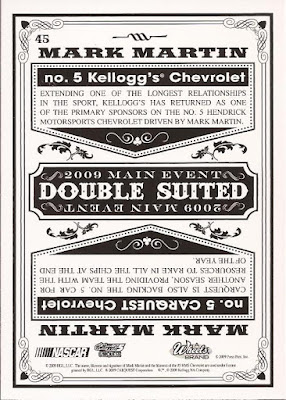 Here is the back of the Double Suited cards. It's the only one I scanned. That's a lot to take in. You can see the back talks about two different paint schemes. So basically two advertisements for the price of one.

This is my all-time least favorite NASCAR set. The Double Suited cards are subsets, not inserts. The poker players are short prints, that's a good find. Playing cards are one per pack. They came in either blue or red back variations- blue was exclusive to retail. I am not sure if red was hobby exclusive or not, as I have never opened any hobby packs of it. Nor do I plan to!