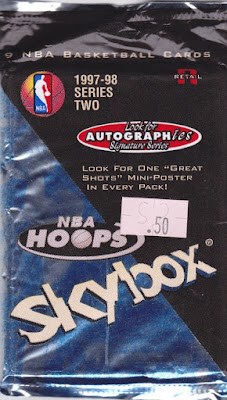 It was just over three years ago that I posted a pack of Series 1 from this very set. With the NBA Playoffs currently in full swing, now is as good of a time as any to post a pack of the sequel. 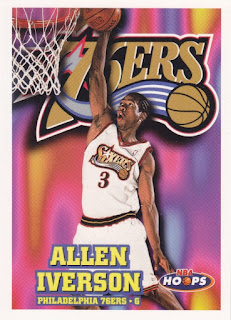 287 - Allen Iverson - Pink! Fire! Otherwise, not a bad second year card of AI. I just don't know what they were thinking with this design. I'm fearful that this is the direction Topps baseball is heading these days. 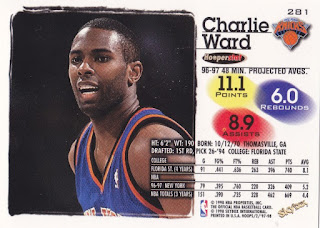 281 - Charlie Ward - The Heisman guy. Almost 20 years later, we are all fully aware that per-48 min stats are complete B.S. It's not the worst thing in the world to imagine what a bench player would do with starter's minutes, but no one is ever playing close to 48 minutes per game outside of some masochistic NBA2K setup. 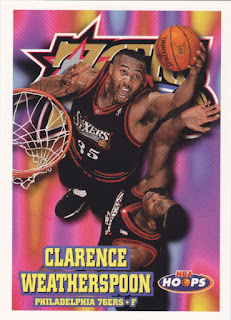 291 - Clarence Weatherspoon - Weatherspoon gets the same pink flame treatment as Iverson, so it's looking like the color schemes are team-specific. 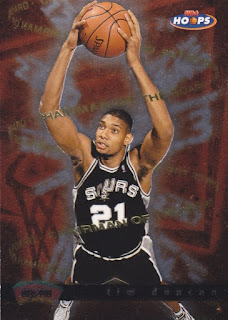 9CB - Tim Duncan Chairman of the Board - Young Tim Duncan! There's more than a good chance this is going to be the only card of an active player in this pack. According to the wrapper, these were a 1:9 pack pull. 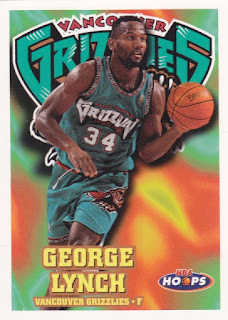 323 - George Lynch - What is missed more, teal uniforms or NBA basketball in Vancouver? 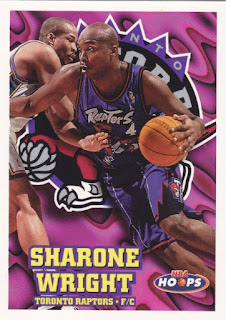 317 - Sharone Wright - Yeah, the cartoon dinosaur was a little silly, but the current Raptors logo now looks like a deflated basketball. 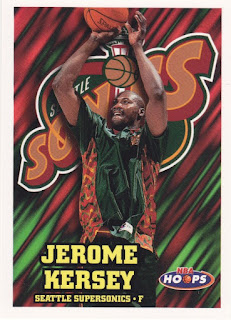 310 - Jerome Kersey - The late, former Blazers starter did a tour of Western Conference rosters, including the Spurs and the dreaded Lakers. 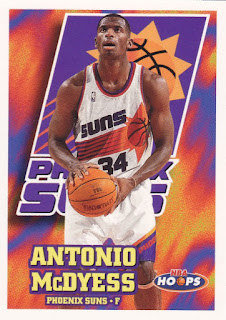 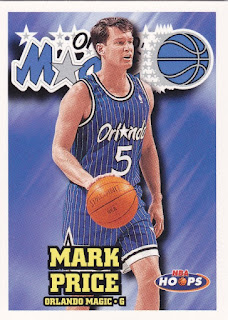 285 - Mark Price - While you're never going to improve this design, Orlando's background is at least not-so-nightmarish. 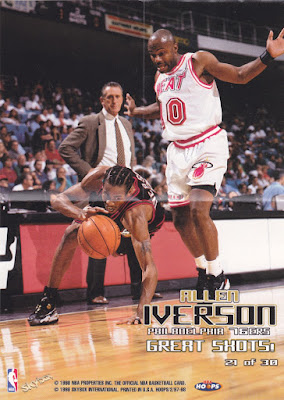 21 - Allen Iverson Great Shots - Each pack comes with a mini poster that's standard card-sized if you fold it over twice. It looks like Tim Hardaway is the actual subject of this photo, and we're just taking SkyBox at their word that this snapshot in time leads to something resembling a "Great Shot".

In 1997-98 this would have been considered a pretty good pack. And for me personally, I would consider this a pretty solid pack, even now nearly twenty years later.

Looks more like my memory of Skybox than Hoops - I guess when they merged they decided to just do a design mashup.

Now that Kobe retired Tim Duncan is indeed one of only two left in the NBA that are in this set, with Kevin Garnett the other. It may not have been the best design but I still love the set.