Written by --David at 11:06 PM
Forgive my back-to-back posts. I don't normally do this, but when this set came in the mail today, I just couldn't wait to share the news!

What you see below is the oddly-difficult-to-find 1989 Double Bubble Major League movie card set. The set was given out in Milwaukee during the filming of the movie.

The fronts feature a nod to the 1974 Topps set with the banners at the top and bottom of the card. The top banner features a "Major League" graphic of players playing ball with a huge orange sun behind them. The bottom banner lists the actor's name and the character he portrays in the movie. The center image appears to be staged photos of the actors, and are of surprisingly decent quality given they are from 1989. All of these features are surrounded by a bright blue border. 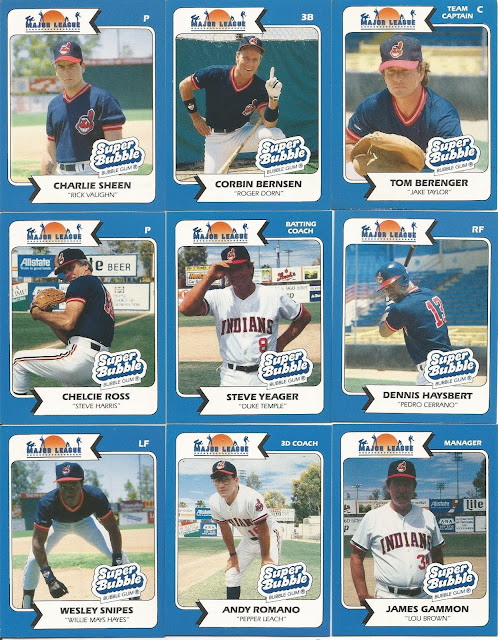 The cards measure 2-3/4" x 3-1/2", making them slightly wider than standard issue baseball cards. This also means they do not fit in tradition 9-pocket pages. However, that is a sall price to pay for having these babies in your own hands. The backs are blank.

There are two cards with multiple people on them. One is essentially the four "stars" of the movie and the other features the team coaches: 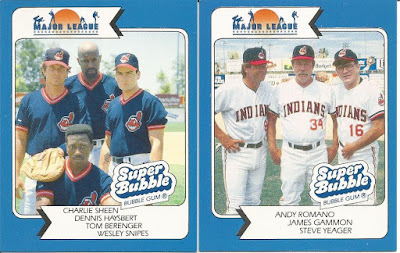 It has become one of the hardest sets to find in the wild. There are a couple reasons for this, I believe.


Whatever the reason, I knew I would pay a premium for the set if I were to ever own it. It came up for auction, and I pulled the trigger after MANY days of debating. In fact, the set had already been listed and the cut-off had expired the first time. I thought for sure I had seen the last of them. Luckily, the listing reappeared and I couldn't pass it up.

Those are so cool! Great find!

Dangit! Steve Yeager?? Now I gotta find one of those....

I have a full set that I inherited from my aunt who was in the stands during the filming in milwaukee. I may be looking to sell.