Written by Kin at 5:05 PM
Since the National is happening and I'm not there, I decided to open a box of 1991 Stadium Club Series 2.  I completed series one from one box and hope is to do the same again.  This has been reviewed before but it's been awhile.  Most of you that read this love the junk wax era, I am sure. 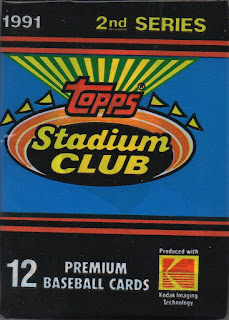 This was the first year for Stadium Club.  The product was well received despite the high price point.  Photography was a large reason for the positive reaction.  As I opened packs, I was disappointed in the photography.  While series one had some great photos, this series left a bit to be desired.

Borderless cards are commonplace now but weren't in 1991.  No borders combined with minimal design on the front made these cards easy on the eyes.
I loved seeing the "rookie" cards on the back.  I used quotes because it was of course only the Topps card.  In some cases players had Donruss or Fleer rookies first.  Another of my favorites was when the card pictured on the back was the card you were holding.

As an Indians fan during my teenage years, there was no way that I wasn't moving Charles Nagy to the front and posting him first.

Rob Deer - the "three outcomes" player of my youth.
Is it just me, or does Mark McGwire's bat actually look like it's bent?
Jeff King came to the Pirates just a little too late.  His best days were spent on some bad Pirates teams.

I remember how good Hensley Meulens was supposed to be.


Sam Horn is my earliest memory of the northeast/Yankees/Red Sox bias.  After his rookie season he was destined for the Hall of Fame.  Yeah, about that...

Ugggh. Sam Horn. I wish that name could be removed from my memories.