Written by Kin at 11:14 AM
I was excited to see a Beckett post this week that 2017-18 Parkhurst hockey was trickling into stores.  There was no immediate word on distribution information but by Friday we found out that it is a Walmart only release, available in both the United States and Canada.

The good news is that I was able to find a blaster at one store Friday evening.  The bad news is that I've visited three locations and only found the one blaster.  I want more, but I have enough to give you a look at the product. 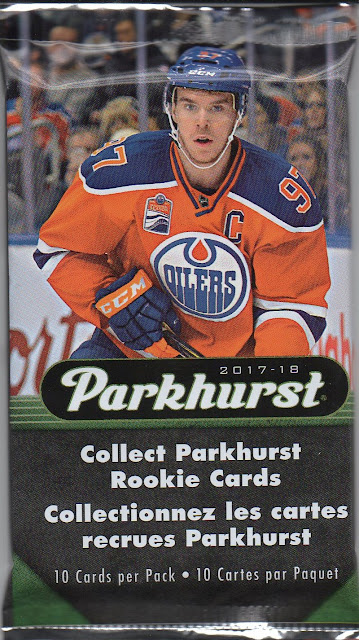 If you do the research and understand what Parkhurst is, you won't be disappointed in the product.  If you ARE disappointed, it's your failure as a consumer.  Each pack I opened contained one parallel or insert, just like last season.  I won't post the box, but I present to you one pack from my blaster.

My non-base card from this pack was a very good one.  The black parallels are the more scarce of the two at one per blaster.  Clayton Keller is one of the top rookies from the set and I couldn't be more thrilled (unless I'd pulled an Alex DeBrincat).

Game-action shots of Golden Knights players will excite some.  I honestly have Golden Knights fatigue already, as the NHL Network and most media outlets are shoving them down our throats.  I also listen to the "Puck Podcast" weekly and it seems like they spend at least 15 minutes a show talking about them.  If I didn't plan to work on the set, I might have set this card ablaze.  James Neal is complete garbage.


There you have it.  Nothing shiny or autographed in the pack but if that's what you're after, Parkhurst hockey isn't for you.  It's a low-end, set-builder's set.  My only criticism is the set size going from 400 cards last season to 300 this season.  I liked the bigger set that gave us cards of more players.  What I would love to see Upper Deck do is a FULL set, like Topps Total or Upper Deck 40-Man from years past.

If you've made it this far and are interested in Parkhurst, I'll have a full blaster review on my personal blog I Feel Like A Collector Again in the next few days.  You can follow APTBNL on twitter at @namedlater and me at @beansbcardblog.  Happy collecting!

For anyone reading this, please feel free to send me any Golden Knights you may get and not want! I am trying to get all of their base cards this year. Have two so far. I can be found on Cardboard History or the Trading Card Database.

Thanks for posting these; haven't seen anything from the new Parkhurst release yet. I've been thinking about picking up a blaster myself, good luck with the set!