Written by Jafronius at 5:22 PM
Greetings...

Today is the 25th anniversary of the airing of "All Good Things...", the series finale of Star Trek: The Next Generation.  TNG's ending coincided with my graduation from high school, so I would be starting my college life / young adulthood without my first "can't miss an episode" television show.

For those who haven't seen the episode, the finale sees Captain Picard moving forwards and backwards through time by the all-powerful alien Q.  Turns out the Q race didn't end their trial on humanity, set up in the TNG premiere episode "Encounter at Farpoint".  The Q found humanity guilty and set up their demise, and it was up to Picard and the crew from 3 different time periods to stop it.

"All Good Things..." was considered to many to be a movie-quality effort, much better than TNG's first movie, "Star Trek: Generations", which was being worked on while the finale was being filmed.  It's among the best finales ever for a popular TV show, and the episode stands up even now, 25 years later.

To mark the occasion I took a special trip to the storage unit where all my stuff is to locate a TNG-themed pack:
Reflections was the 18th release of Decipher's CCG.  Released in the fall of 2000, this 18 card pack contained an assortment of 17 cards from any of the prior releases, but most likely cards will come from the first 6 major expansions (Premiere, Alternate Universe, Q-Continuum, First Contact, Deep Space Nine, and The Dominion).  I tended to think of it as Decipher cleaning out their warehouse.

The 18th card in the pack was a foil version of one of over 100 rare cards from the different sets.  The chosen rares were usually visually striking in some way, so the foil was meant to enhance the image.

Usually in these types of packs, you had a certain about of Commons and Uncommons, and then one Rare card.  For Reflections, that rule was thrown out the window; some packs had multiple Rare cards and some could be all Commons from just a couple of releases.  Collectors didn't worry too much about that, however, since the foil card was the reason to purchase these things.  I think these were 5 bucks a pack at the time.  Anyway, here's what I had in one of my packs: 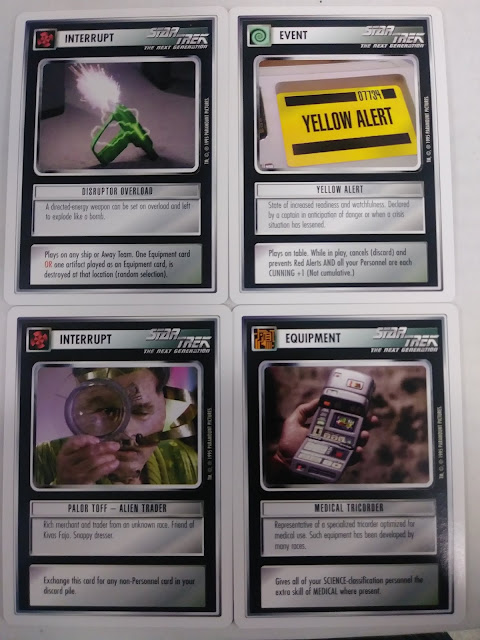 I put the rarity and release in parenthesis next to the card.  Three of the first 4 cards were from the Premiere set.  Yellow Alert came from a release called Warp Pack, and was a preview card since it was released again in the Alternate Universe set.  It was available free to players because there were complaints that the pre-constructed starter decks were hard to play out of the box. 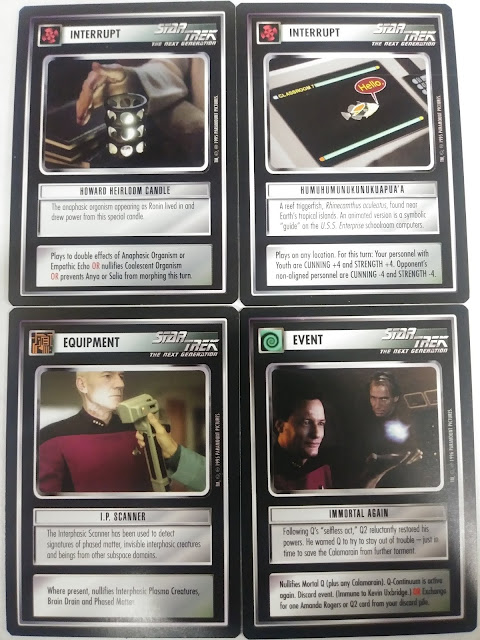 Humuhumunukunukuapua`a is the state fish of Hawaii.

I did a brief write-up on how to play the game in my first CCG post, so if you were kinda/sorta interested in the game check it out. 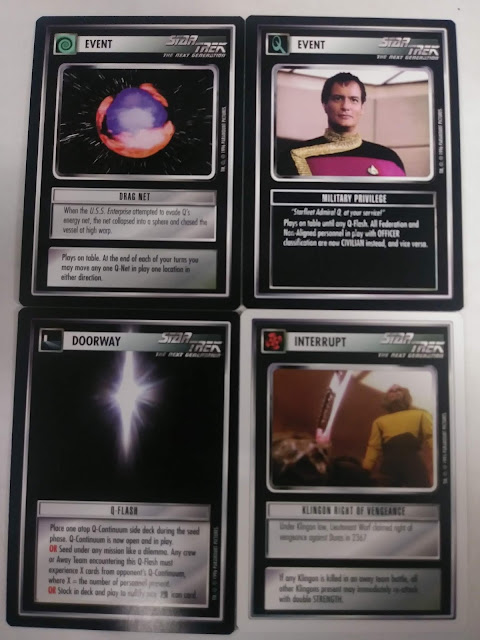 The only checklist of importance is the list of Rare foils, since the rest of the cards were essentially randomized.

Here's why I chose this particular pack: 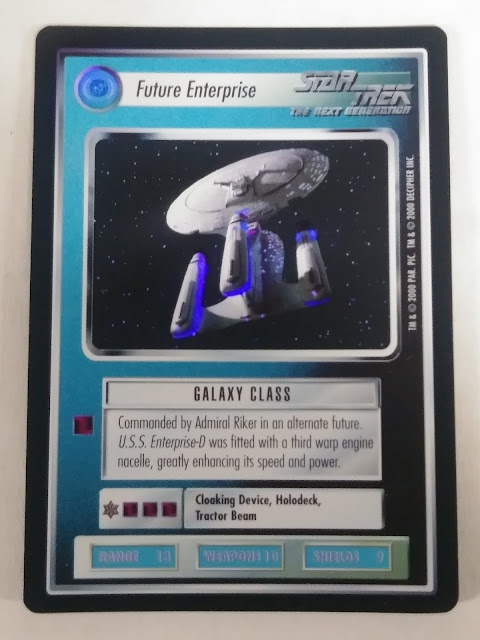 You can see the foil-y goodness in the nacelles and ship lights.  The foil can also be seen on the TNG logo, stars, and the ship attributes at the bottom.

I remember being so pumped to see the Future Enterprise make it's first appearance in the episode; I assume it was the same for everyone else.  It made quite the impact for being in the episode for less than a minute! 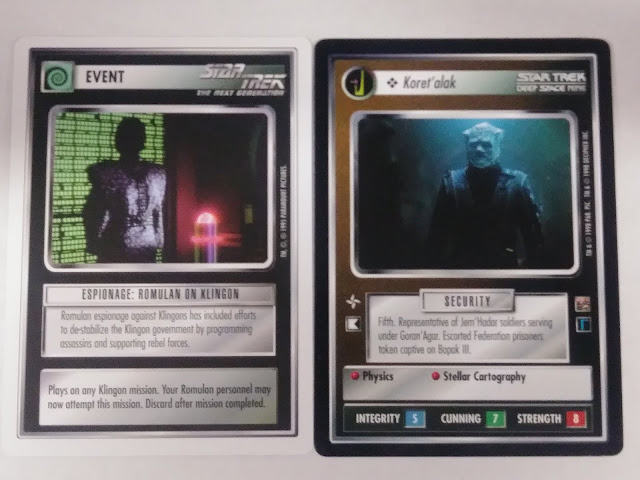 Dukat of Borg didn't appear in an episode.  Rather, it was created for a set called Enhanced First Contact.  Decipher bundled several packs of the First Contact release with one of these premium cards.  They figured since Picard became a Borg there should be other possible Borg representatives from the other major TNG races.

Anyway, that's the pack.  Realizing one of my favorite shows ended 25 years ago is certainly an eye-opener.  Time marches on, but at least there's still reruns and YouTube.  The sky's the limit...and thanks for reading!

I bought some of the Star Wars CCG cards back in the day, but don't think I owned any of the Star Trek. Congratulations on pulling that ultra rare Enterprise.