I've been an avid reader of APTBNL for some time now and have longed to share my pack
experiences — thanks Matt for the opportunity!

I picked up this pack of 1995 Studio a few months back at a coin shop.
The first thing I noticed was the price: $1.79. It's a bummer that packs today
aren't that cheap anymore for the same amount of cards (5). 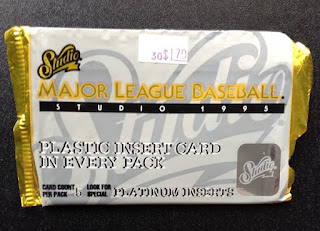 Anyways, Studio was produced by Donruss/Leaf and its inaugural issue was in 1991.
The set was released every year thereafter but unfortunately took a break in
1999 and 2000 due to the Pinnacle bankruptcy.

What made Studio an interesting brand was that the base set always featured portrait shots
which accentuated the player's personality. The backs often contained candid info on the player.
For example, the reverse side of the '92 Frank Thomas issue tells us that the Big Hurt
"…Once worked in a textile mill." Here's a look at the other Studio releases from the 90's:
(click the image to see it in a larger format) 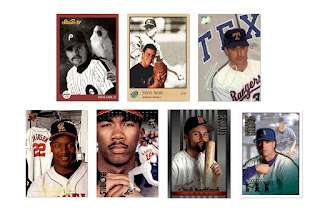 The '95 design switched gears by utilizing some action photography and many players
were looking off-camera. Not to mention the horizontal layout. To me, this set loses some
of the personal touch that the other Studio releases had. Up close information was removed
from this issue and replaced with career stats and player notes.

Design wise, it didn't contain a dual photo front but instead brought in a credit card theme.
Packs featured 5 cards. Let's take a look at who I got: 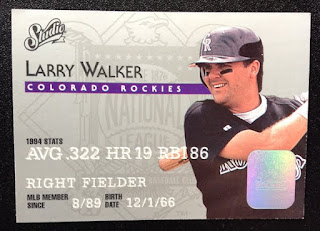 I like the large National League emblem in the background.
The hologram with the team logo is a nice touch. 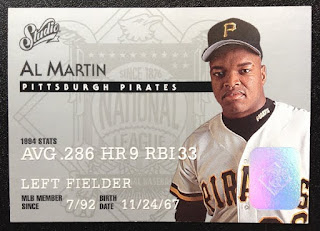 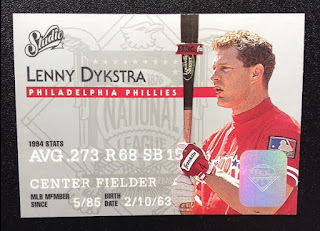 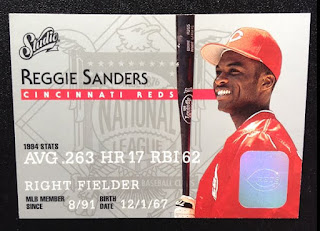 Each pack also contained a "Plastic Insert Card"  — this was usually a gold parallel
of the base card, playing off of a Gold Card theme.

Our gold is…. Neon Deon! 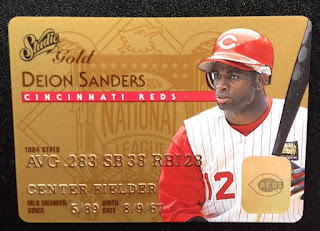 Here's the flip side — I like how they carried it through with the sig on the back: 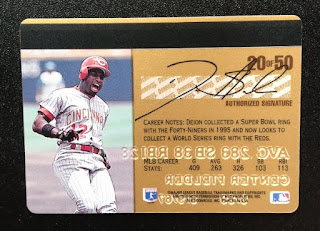 Studio also released a "Platinum" parallel, inserted at 1:10 packs. I always wanted to pull
one of these back in the day but never did. I picked up an A-Rod platinum last December
from my buddy Harold. It's the same card as the gold version, just with a silver background
and somewhat of a sparkly shine. Perhaps I should throw this one in my wallet. Not only
would I have a platinum "credit card," but one that features A-Rod's namesake.

Take that to the bank: 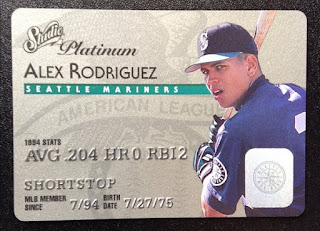 I thought these were executed quite well at the time, and definitely have that "You'd see it in
the 90's but the concept would never fly today" vibe. The lack of insert variety diminishes the chase
value of this release, but it's still one of the most simple, yet unique base sets of the 90's.

What do you think?

That was a solid first post, Steve! I've only ever seen these in dime boxes at shows, so it was pretty neat to the contents of an actual pack. And that gold Sanders sure is great, wouldn't mind finding that one in a dime box :)

This is a very underrated set in my opinion. I have a couple of the Cubs and am quite happy that I do.

Wasn't interested in this back in the day, but I stumbled across some of these a few years ago and decided to build the set. I also found an unopened box that I hope will help me complete it.