Written by --David at 6:00 AM
You are looking at a pack of 1963 Topps Monster Laffs. The cards are 2" x 3" and are printed in black and white. There are 66 cards in this set. The cards were sold in 12-card packs wrapped in clear cello. Each card front features a different monster taking up the majority of the card face. The images are black and white  and appear to be stills from movies. Beneath each image is a pun or very low-brow caption. Think memes and dad jokes before those were labeled as a thing.

Below, we have the following hilarious examples:

Some of the cards were printed horizontally as well:

The hilarity continues with these classic gems:

And finishing up the pack, these gut-busting monster cards:

The backs are brown card stock and feature the card number, the "Monster Laffs" insignia, and a joke. Other information on the back includes a call to action to go see a movie and a copyright tag which features no date (which was common on many card products of the time). 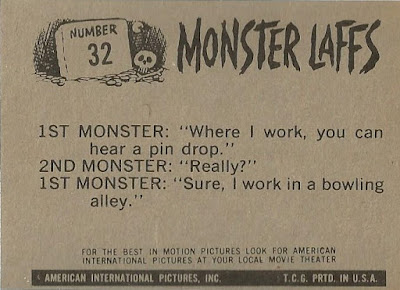