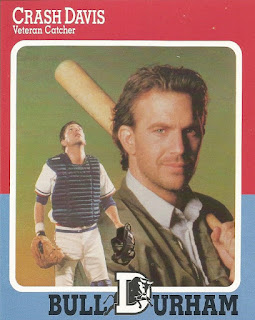 I present to you the 1988 Gatorade / Orion Pictures Bull Durham set. The set was packaged with Gatorade drink mix (hence the Gatorade designation, though that is not indicated anywhere on the cards themselves). Each card is large, measuring 4" x 5" in size. The front features a design very reminiscent of the 1986 Topps, though to me looks more like something Donruss would have made. The top portion of the border is red with a blue border half (well, not really at the halfway point) on the bottom. The player's name (character name) and position (generally tongue-in-cheek) is displayed in the upper left corner. A two-image collage (inset?) is featured as the main portion of the card. At the bottom, the words "Bull Durham" featuring the Bulls logo. The photos are two stills, one significantly larger than the other, from the movie. Above, we have Kevin Costner's character, Crash Davis.

The cards came in a clear cello wrapper with no markings or designations. Below, we have Millie: 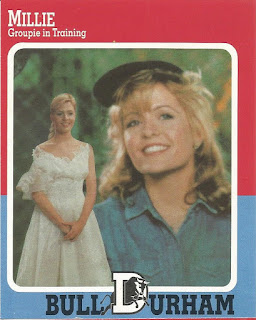 Susan Sarandon's character, Annie Savoy, gets a card in this set: 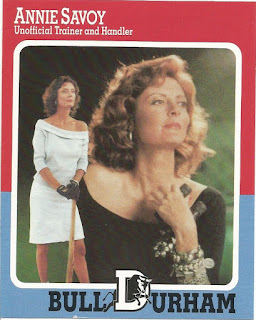 And finishing out the pack, we have a card of Ebby "Nuke" LaLoosh: 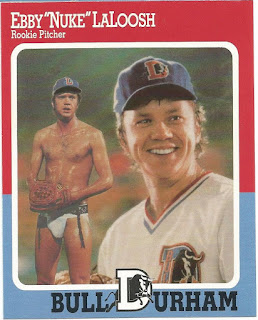 The backs of the cards show the character's name and position near the top. The rest of the back grabs quotes from the movie spoken by the character. At the bottom of the card, there is a blurb about the actor playing the character along with copyright information. 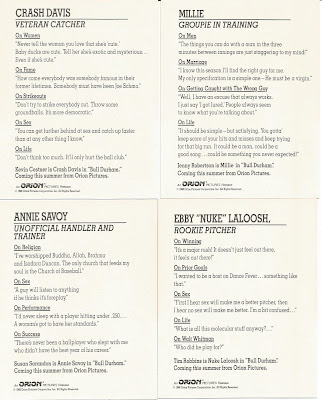 Would have been really great had they been standard card size.

These are super cool!

This is a cool oddball set. When I wrote my review, I compared it to the 1975 Topps design.