Allow me to reintroduce myself.....my name is Hov Alec! While you might not have seen my name, I've been here before. You see, I was actually the second person to post a pack on this very website...in 2009. That was somehow over eleven years ago; I was about to graduate high school. Funny how time flies!

So where have I been? I've actually been collecting and reading blogs the whole time! I've never really known what to comment or post, so I've been a longtime lurker all this time. No longer! It's time to get my act together and actually start posting some of these fun packs I've accumulated.

I'm not sure about your part of the country, but by me the card shop is becoming an endangered species. Imagine my excitement to discover a new place this summer that actually sold baseball cards: while watching a local TV profile on a comic shop, I saw telltale old boxes of Topps in the background. The rest is history...if you consider some new products alongside a wonderful assortment of late '90s/early 2000s products fun (which, conveniently, I do).

Now that I've given a long enough introduction, let's get started with some good stuff: 2000 Bowman. We've had the chrome version of this here before, but this is the regular version. Let's see who actually made an impact, and who became barely a memory!

First, the wrapper: (and if you're interested in odds, check this out) 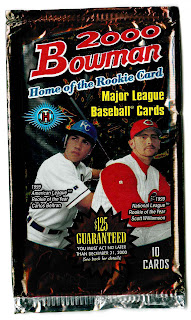 We start off with our promised one-per-pack insert from the Retro/Future parallel. It was kind of a cool idea: veterans were featured on an old-timey TV, not unlike 1955 Bowman, while rookies got a modern flat-screen setup.
I lead with all of that since it's a foil front, meaning this scan shows nothing of the front design.
279 - Josh Girdley (played six seasons, never higher than A) 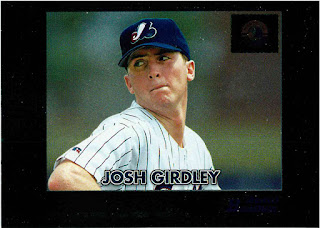 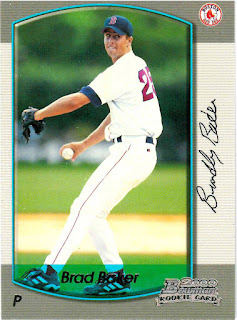 419 - Barry Zito! One of the bigger names with a rookie card in this set. There's a tiny bit of paper loss from where it stuck to the previous card, but this makes this pack worth it for me already. 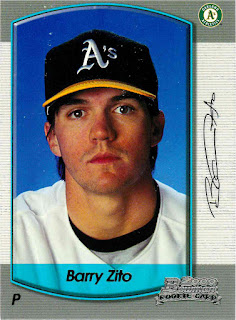 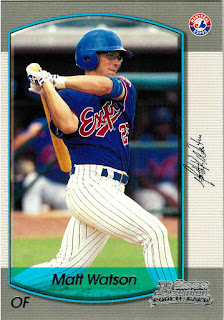 193 - Alfonso Soriano (Had a good major league career! Sadly, his real rookie cards are from 1999) 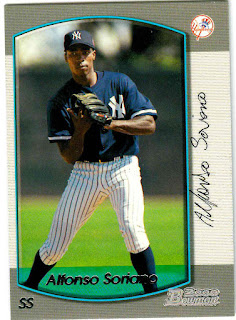 201 - Andrew Beinbrink (born in Naples, Italy, which is cool! Made it to AAA) 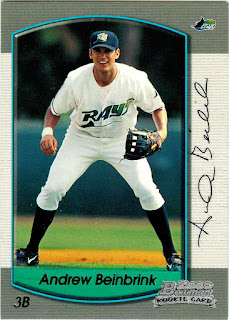 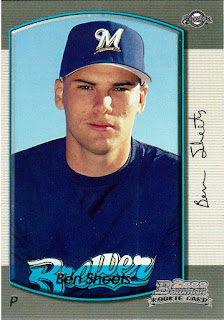 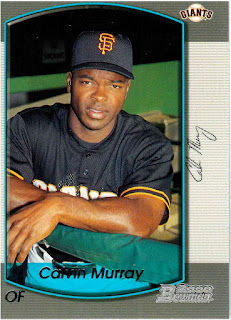 37 - Kevin Brown (our lone representative from the veteran portion of the set...there are apparently 140 veterans to 300 rookies) 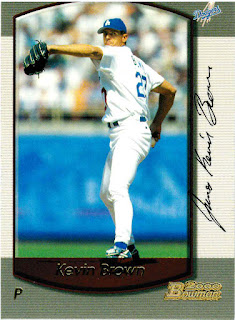 272 - Leoncio Estrella (62 career games in the majors, across three seasons) 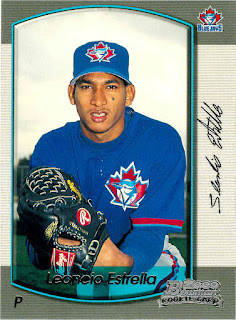 That was a solid pack; certainly better than expected. I leave you with a sample card back: 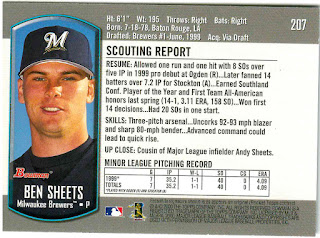 Thank you all for reading today, and for having me back! I'm excited to hopefully post a bit more regularly (and/or actually start a blog of my own one day). Until then, we won't call this a comeback, right, since I've been here for years? Thanks.

Email ThisBlogThis!Share to TwitterShare to FacebookShare to Pinterest
Labels: 2000 Bowman

Cool Zito. Shame it was damaged.

The fact that Beltran is on the front of these packs make them that much cooler. I'm a big fan of his cardboard as a Royal. Also, that Alfonso is pretty awesome! Nice pulls.

Definitely a solid pull. Zito and Soriano even if it isn't his rookie.