Written by JGBlargh at 1:43 AM
Picked up a pack of the recently released 2020-21 Upper Deck MVP.  If you have seen one year of MVP, you basically seen them all. 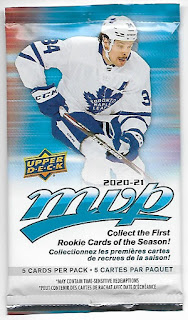 Leafs star Austin Matthews on the pack cover.  Retail edition with 5 cards per pack.
The odds on the back.  Basically 2 out of 3 packs will have an insert or parallel.  As Meatloaf said, "Two out of three ain't bad."  Except Meatloaf wasn't talking about sportcards. 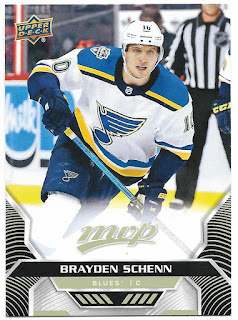 First card is Bryden Schenn of the Blues.  The front design is familiar if you have opened any MVP from the past several years.  It changes slightly each year but it is easily recognizable from season to season. 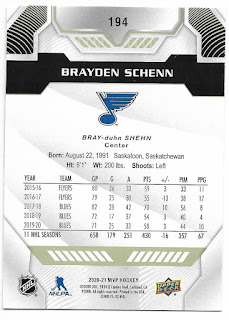 And so too are the backs easily recognizable from season to season.  Recognizably bleh.  All that space but they limit it to five seasons of stats.  The one neat thing is the having the pronunciation of the name included on the back.  Great for those European names... or North American names if you are European. 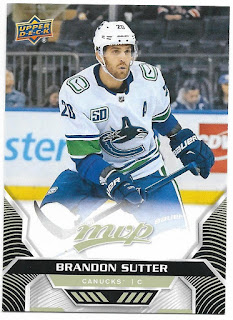 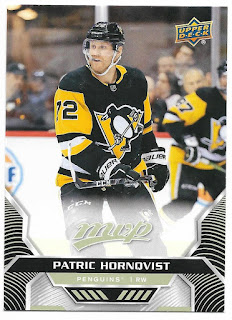 Patric Hornqvist who was pretty qvist about his trade to the Panthers this summer.  After the trade a neighbour tweeted a picture of Patric's Penguins' equipment tossed in the front driveway.  Letting it air dry was the response from the club.  In an interview regarding the trade, he lamented "Pittsburgh didn't want me." 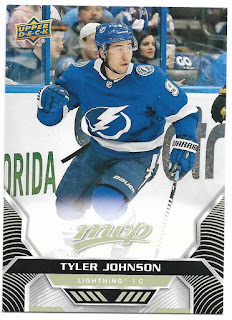 Speaking of unwanted players.  Tyler Johnson recently went unclaimed on waivers.  The Lightning were hoping to shed themselves of his $5 mill a year contract, including a no-trade clause.  There were no takers. 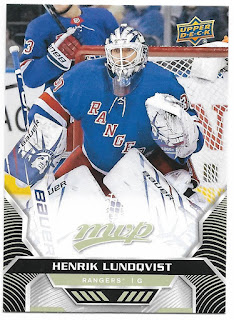 And to continue the theme of unwanted players.  Longtime New York Ranger Henrik Lundqvist had his contract bought out by the time this offseason.  He quickly drove down the I-95 and signed with the Washington Capitals.  It'll be a big night when he returns to Madison Square Gardens.

And that ends an underwhelming pack of 20-21 Upper Deck MVP.  We succumbed to the odds and came up empty handed for inserts and parallels but ended it off by giving three misfits a new home in our collection... unless of course someone wants to trade.

Hadn't seen these yet, thanks for posting!

Lundqvist is my all time favorite player and my local store either didn't bother to bring these in or the scalpers got to them...either way I wasn't able to get any cards from this set at all. So I'm definitely interested in trading.