Written by Jafronius at 9:47 AM
Greetings...
Hope everyone is doing well.  A couple of posts ago I documented my first encounter with the "card bros."  I'm going to recap and expand on that, so if you just want to see cards, feel free to scroll down.
Back on October 7 (a Wednesday), the card vendor was restocking the card aisle at the Target I occasionally work at.  4 "card bros" were socially distant, waiting for the vendor to finish up.  I assume they had to wait until the vendor finished and took pictures of his handiwork before they stormed the aisle, like some other blog posts have indicated.  Because I had errands to run, I couldn't stick around so I planned to go back to the store the next day to see what was left.
On October 8, I ran into my Target and took a look.  It was later in the morning, so I wasn't too optimistic.  Although I couldn't for certain blame it on the bros, all that was left when I went in was a few packs of Ginter and a couple blaster boxes of 2020 Leaf Pete Rose Charlie Hustle Edition.  I didn't get any Ginter because I don't actively buy Ginter (but I did find and buy a blaster box and fat pack from another store earlier because pandemic means desperate times), and I didn't get any Leaf because even in a pandemic, it's Leaf.
On October 9, I made a trip to the Meijer in my area.  Disinfectant spray is hard to come by so I go there from time to time after work to see if they got any (I got lucky a few times).  Meijer is also good for cards, even through they are slightly more expensive than Target or Walmart.  As expected they have nothing, except a whole bunch of 2019 Score football fat packs on clearance.
When I went to the card aisle, there they were...I counted 8 bros hanging around in the area.  They were socially distant, but were in groups, so I assumed those bros were related somehow.  No vendor had shown up yet.  Disappointed, I promptly vacated the premises.
On October 20 (a Tuesday) I was finishing another Target shift when I saw a crowd of people at the card aisle.  I was curious why they were there because the vendor was last there on a Wednesday, so I assumed he showed up on Wednesdays.  But there he was, unloading product.  And there they were...11 of them.  Now it's possible some of them were actually there to buy cards, because I'm pretty sure there was a woman among the bros (a card "brah"?), but I didn't see any young kids around her.  One bro snuck in and got 4 packs of one of the hanging packs (my store imposed a 4 pack limit) and looked like he was gonna distribute them to some of the other bros.  Once again, I left without even trying, but I had another shift the next day so I would be able to see if anything was left.
Other than hockey cards, this was it: 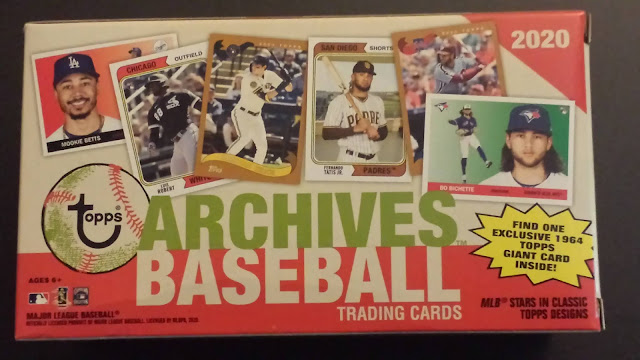 One blaster box of Archives.
It was still there when my shift ended so I picked it up.  I have yet to see any other Archives in any store, so this may be my only foray into the set. 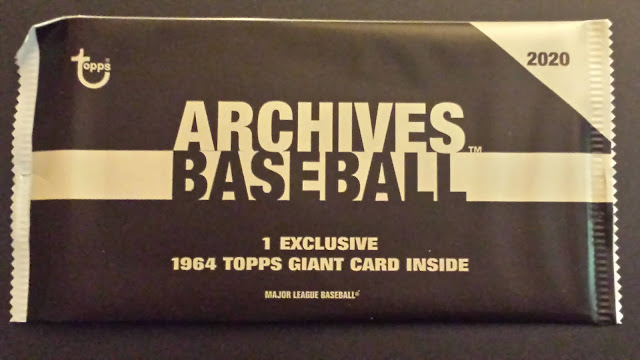 The blaster boxes have 1 exclusive 1964 giant card inside it, so that counts as a pack, right?  Here's what I got: 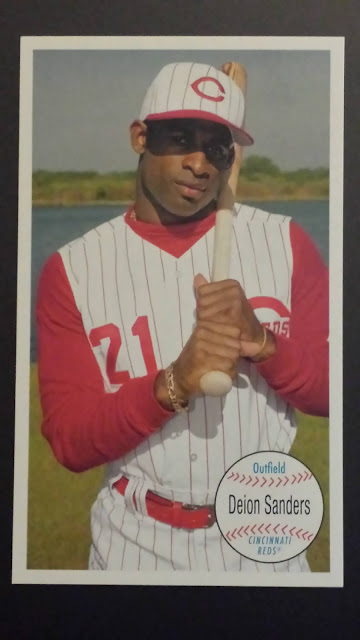 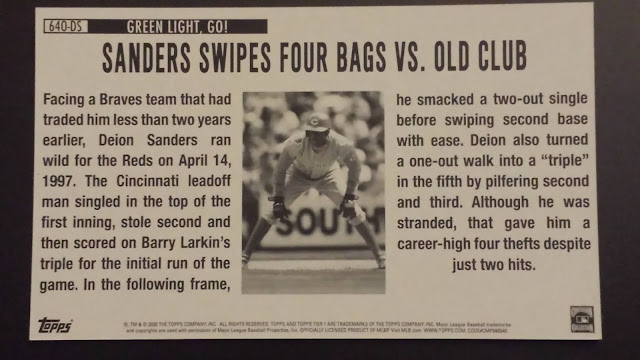 #64O-DS - Deion Sanders (front and back)
Not bad, I certainly won't complain about getting Neon.  Storing him, however... 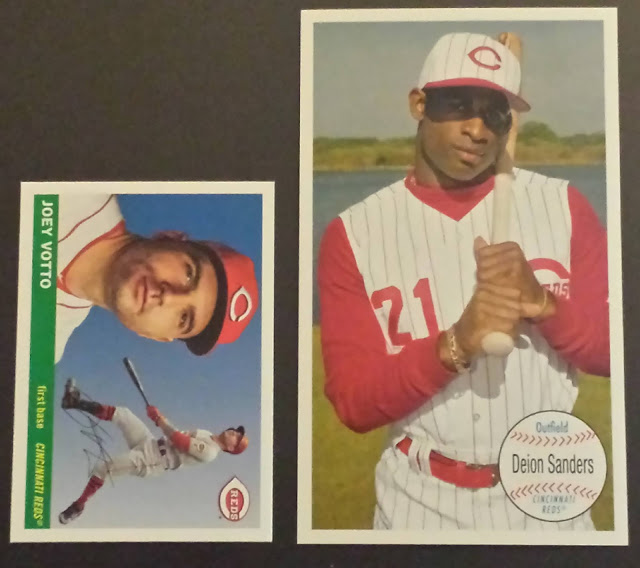 There's Prime Time next to Archives-mate Joey Votto for a size comparison.

Anyway, that's the pack.  It was certainly depressing to see the card bros in action.  I hope this fad ends as soon as possible and becomes just part of the 2020 weirdness.  I had another shift yesterday and when I left I noticed a few packs and hanger boxes of 2020 Panini Absolute still there.  Maybe that's a sign that we've turned the corner.

Outside of the Fan Favorites autographs... those 1964 Topps Giant box toppers are my favorite thing about 2020 Archives.