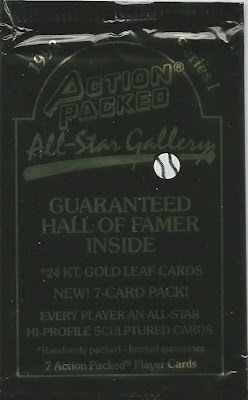 Here we have a pack of 1992 Hi-Pro Marketing Action Packed Series 1. Technically, these are called Action Packed All-Star Gallery Series 1. They are listed as being 1992 cards, even though the wrapper shows 1993. The cards themselves show a copyright date of 1992. Gotta love this hobby. Unfortunately, the scanner does not do the wrapper nor the cards any justice. The wrapper is black with gold lettering. There are 7 cards in each pack.
The Series 1 set consists of 84 cards. There is also a 24k Gold version with 24 cards. I was not lucky enough to pull any 24k cards... Spoiler Alert.
The cards themselves feature all-star players and hall-of-famers (and future hall of famers) in very thick embossed card stock. The players appear in a 3d relief in the middle of the card with a gold foil multi-line border surrounding the main image. In the lower corner, the words "Action Packed" appear in black surrounded by gold foil. The player's name is centered in black block lettering on a gold foil nameplate.
First up, we have Orlando Cepeda, Frankie Crosetti, and Rich Asburn:

Unfortunately, because these cards are embossed they way they are, they did not age well. Upon opening the pack, the cards were stuck together due to the coating. This means many of the cards have white spots where the card stuck to the card on top of it and/or to the inside of the wrapper. This is especially apparent when looking at the black areas of the borders.
Here we have Clem Labine and Al Kaline: 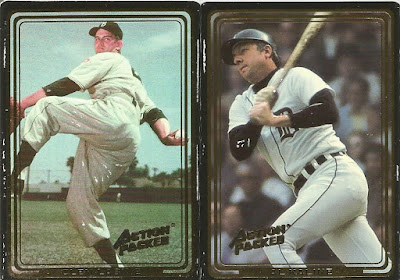 Rounding out the pack, we have Bobby Grich and Bob Horner: 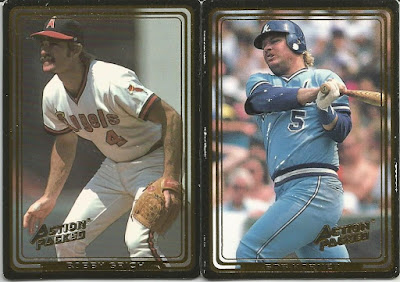 The backs of the cards feature the player name in gold foil in all-caps at the top along with their primary position. Just below that in black, we see biographical information along with a list of teams the player appeared with and the years they were with those teams. A gold foil horizontal line separates this top section from the rest of the back. Below the line, we have their Major League Totals and below that, a bulleted list of career highlights. The card number, copyright and official logos appear along the bottom edge of the back of the card. 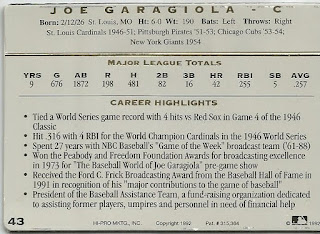 I am a sucker for raised/embossed/relief cards. There is something very satisfying in the tactile feedback one gets from rubbing the thumb across the face of an embossed card.

Fantastic cards. When I was opening up packs of Action Packed cards, they only produced football cards. I've looked for a box of this stuff a few times, but they're never in the price range I'm comfortable paying. Maybe one day.

Thanks for posting about these. I just ordered a few of these because of your post, and I don't typically buy anything from the 90s. These are too nice to pass on.