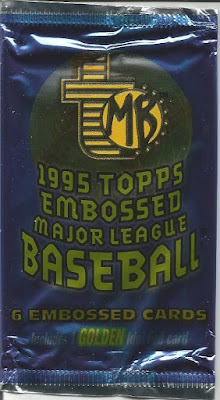 Today, we're busting open a pack of 1995 Topps Embossed. There are 6 embossed cards in each pack, one of which is a Golden Idol Foil card. There are 140 cards in this set. The Golden Idol cards are an exact copy of the base set, but done in gold.

The base cards actually come in two varieties. Most of the base set are picture on the right below. They feature an embossed/relief picture of the player, the "Topps MB" logo, and the player's name. A subset of the base set are the silver foil "Rookie of the Year" cards, featuring a player and the date of their ROY award. In this pack, we pulled Eric Karros: 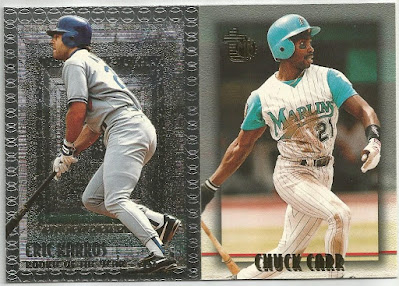 The Golden Idol cards are certainly something to behold. Imagine, if you will, an embossed card dipped in gold foil. Now, that may sound like a cool idea, and I'm sure it was to someone at Topps. The final result, though... Well, let's say some cards didn't fair as well as others. Here we have John Valentin's Golden Idol card. Though the scanner doesn't do it justice, the fact is the scan isn't really all that different from the monstrosity that is this card: 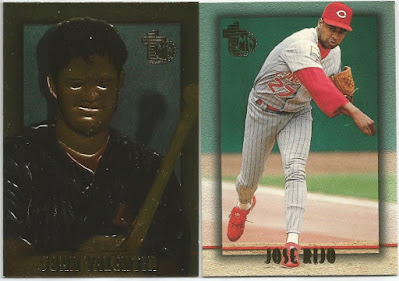 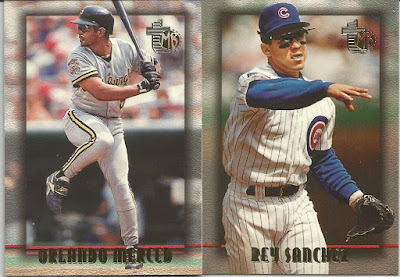 What's really cool about these cards is that the BACKS are also embossed! The player's picture and the name line are both embossed on the back. The back features a picture of the player taking up about half the space on the left. On the right, we have biological information, some stats, the card number (in the little red box) and the player's name/position. Each card also features a "Did you know" bulleted list of facts and tidbits about the player. For the record, this card was pulled from a different pack, but when the opportunity to "Bip" comes along, you have to take it. 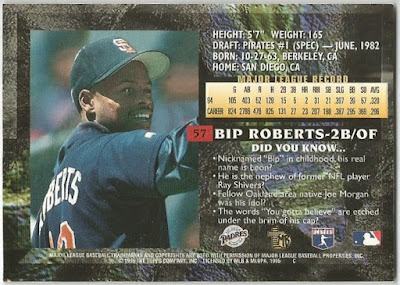 I busted open a sealed box of these packs. There were 24 packs. Each pack had 5 base cards and 1 gold card. For the base, I ended up with 112 singles plus 8 duplicates. That's about an 80% set completion rate from one box. Not too shabby if you're a set builder.

I opened up a bunch of this stuff and the basketball counterpart back in the day. Not exactly at the same level as Action Packed (imho), but they were something different.