If there's one lesson to take away from the vast archives of this blog, it's that a pack doesn't need to contain the hottest rookie or the biggest hit to be enjoyable. In fact, it's often the complete opposite where one can gain the most.

That being said...sometimes it is really nice to get a cool card. And since this is more or less the only place I have to talk cards, I'd like to share such a story here!

Over the weekend, I went to our local card shop. I wanted something to open, but wasn't feeling any of the 2020 products. Instead, I turned to some odds and ends packs of my favorite time: the early 2000s.

That brings us to today's pack: 2002 Leaf baseball, the return of the base Leaf line to baseball. 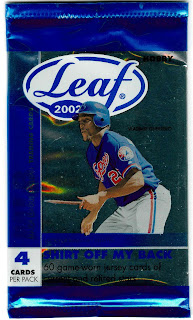 A nice, if plain, wrapper design, though you might notice right away the big drawback to this product: only four cards per pack. From what I can tell, that kind of held it back (and led to the next three years bulking up those card-per-pack numbers).
Let's not hold that against the set, though, before we dig in and see the cards! For more set info, here's the BaseballCardPedia article with set info and checklists.
And may I just say: there were only two packs left in this box, sitting near the register. Never leave the last pack, right? 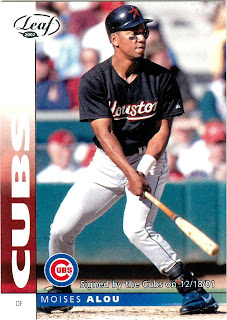 116 - Moises Alou: A solid veteran to start out our pack. We also get a taste of the classic "signed by" notation for someone changing teams. Definitely something that went by the wayside in the last decade or so. I've never decided if I like this strategy, versus just leaving the team logos to match the picture. What do you think? 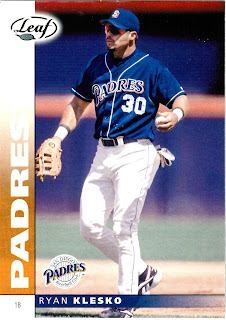 41 - Ryan Klesko: Solid player for a number of years. I checked his Baseball Reference page, and I never realized how close to a 50-50 split his career was between Atlanta and San Diego (plus a one year Giants stint). Kinda cool to be that evenly split! 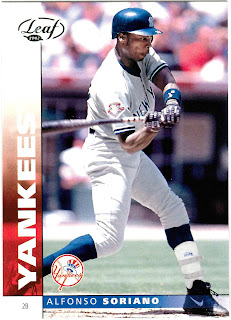 33 - Alfonso Soriano: I always remember him as being anointed as a "next-best-thing" for the Yankees, which will always lead to even more publicity. He had a solid career, though, and his 2002 season went on to be his best (leading the league in runs, hits, and stolen bases).
Let's take a brief pause to look at the card backs:

The design is clean, if a bit plain. Always like the new, large back photo, but I do miss having any text (or more than one season of stats). That being said, while the look doesn't necessarily fit by itself, those descriptors fit with those '90s Leaf designs. As a minor point, I do get a bit of enjoyment when the design of the pack wrapper gels with the design of the set itself.
Now then: I've foreshadowed this enough, so let's look at the surprise found in this pack. Check out that checklist again: If you could get a hit, what insert set would you want it to be from? I know what I'd pick, so getting this sure surprised the heck out of me: 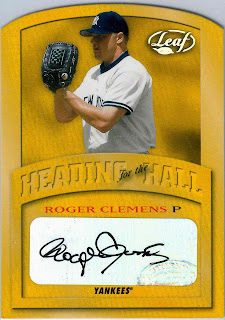 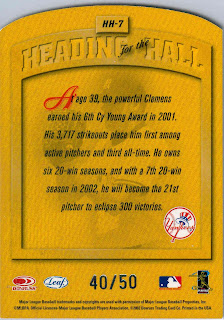 Roger Clemens autograph! Numbered out of 50! While his star has lost a bit of luster in the past 18 years, I am still super pumped to pull this card, and it'll make a cool addition to my collection. It's wild to think this has been sitting in a loose pack, waiting on the counter of a card shop for 18 years to be purchased. 2002 Leaf is also where I pulled my first patch card (and one of my first relics) back in the day (Michael Barrett!), and I'm grateful for how well this set has treated me over the years.
As I write this up, I am thinking that this pack serves to give another definition of a great pack of cards: one that gives you a great story, or a fun memory of beating the odds. A pack that leaves you with a smile, and a happy recollection when you see its contents in your collection.
It also serves to reinforce another hobby truism: never leave the last pack!

What a nice, random pull - congratulations

Nice "Rocket" auto! Can you image if you did leave the last pack and that was it?

A solid pack for it's time...great Clemens pull!

Nice! Same thing happened to me once with a 2002 Topps pack I believe. I ended up pulling a Luis Apiricio Auto. It was the last pack in the box!