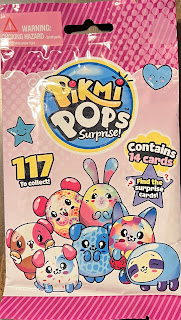 Today, we have a pack of cards featuring characters based on a "plushy lollipop surprise" toy line. IU picked these up from FiveBelow during a day of shopping with my wife. From what I could gather, Pikmi Pops Surprise are tiny plush characters that come in a plastic shell made to resemble a lollipop and collectors are "surprised" as to which one they get. The toys are actually scented. This pack of cards is based on those toys. This is the 2018 Banter Pikmi Pops Surprise Season 1 set. The set contains 117 cards, each featuring one of the pops characters. In addition to the regular issue, there are foil, glitter, holographic, scented, and "special" versions of the cards to collect.
The cards are standard 2" x 3" sturdy card stock. The fronts are simply a title (sorry forgot to take a picture), and the backs feature the characters. The backs are borderless, but are filled in with various shapes and designs for the background. In the upper left, the Pikmi Pops Surprise insignia. The upper right features the card number. The main image is a cartoon of the featured character. Above each one, a "thought bubble" displays a cute of clever saying that fits with the particular character.
First up, we have Moosh the kitten, Tiki the cow and Toogy the puppy:

To the left of each name, there is the share of an edible, which I presume is the scent one might get if the card were scented and/or the scent of the actual plush pop. The next three from the pack are Erkle the turtle, Ooky the monkey, and Kaz the squirrel:

The cards are very cute and colorful, and certainly seem to be aimed at a young female demographic, though anyone interested in colorful characters would have been enthralled with these. Next up, we have Skittle the llama, Nacho the French bulldog, and Glama the peacock. Why is Glama not the Llama??

The packs are not promised any type of collation, so we find ourselves with a duplicate in the mix. We have Kaz the squirrel (again), Chomp the lion, and Tazzle the tiger. I guess only some of the critters are afforded alliteration.

This pack has the two "inserts" mentioned on the wrapper. In this case, we have a holographic Fancy the unicorn and a gold foil Fez the bunny. 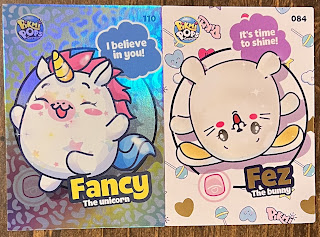 I tried to find a checklist, but was unable to come up with one for the trading card set.

I'm tempted to find a box of this stuff for my nieces. They're all about cute animal related things.