Written by Fuji at 9:00 AM
If you grew up in the 80's, then I'll assume you either rode around in a car with one of those Baby On Board signs affixed to the inside your vehicle... or you knew someone who did.  According to USA Today, approximately ten million of those signs have been sold over the past three decades.

Just like yo-yos and Birkenstocks, they're popularity has gone up and down over the years.  But there's no denying that the peak of their popularity hit in the mid 80's.  If USA Today's estimation is correct, then I'd wager that 90% of those signs were sold from 1985 to 1986. 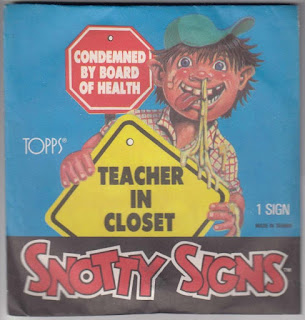 They were so popular that Topps decided to capitalize on the trend and produce 24 different parody signs that were sold in 1 sign packs. 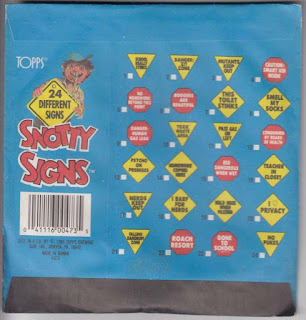 The back of each pack contains a checklist of all of the signs available.  There are three different shapes (diamond, triangle, and octagon) with each shape having 8 different sayings.  Although people couldn't see which sign they were buying, they could increase the odds of picking the sign they wanted by feeling for a particular shape.

According to Jeff Allender's House of Checklists, this was a test product that was released right before Topps released their Snotty Sticker Signs.

I found these two packs at the De Anza Flea Market earlier in the month.  The vendor sold me a few non-sport sets and threw in two packs of this stuff for free.

Here's what I pulled out of the first pack: 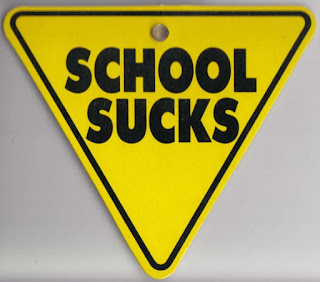 By the way... if you look carefully you'll notice that the checklist lists this sign as School Really Stinks.  Maybe I have a super rare variant 😏.

The second pack I opened contained: 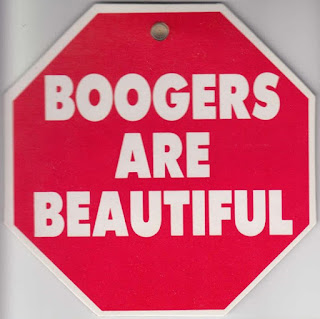 It's obvious that these were marketed towards kids.  Although... I gotta admit, I'm not really sure who would want to hang up a Boogers Are Beautiful sign.

All in all... it's an interesting product that brought back memories of my childhood.  I'd probably pick up a few more packs if there were in someone's quarter bin.  But that's not saying much.  I'd pretty much buy any mid 80's pack for 25¢.

Some pretty questionable signs in the original set-- "Dad's Drunk Again", "Date in Bed"? Pretty cool over all.

Awesome. Yeah, some pretty interesting ones in the checklist.