Written by Jafronius at 10:11 PM
Greetings!

Hope everyone is enjoying their weekend.  It's a big day here in my little cubicle at the APTBNL offices.  However, no one decorated my cube because it's Saturday and no one's in the office and there's no such office.

Today is the 8th anniversary of my very first post for A Pack To Be Named Later.  In fact, I set the auto Scheduler to publish this at the exact same time as that first post (I should have been doing that all along, I guess).  Long time readers of the blog will know that I go non-sports for the anniversary post...go ahead and check, I'll be here.

But not so fast!  According to my spreadsheet, this is my 200th post as well!  I can't say it's by coincidence; I noticed back in July if I posted twice a month I'd make 200 in October, so I just had to make sure it came on the anniversary.  I wonder if Matt F has stats on who has posted the most on the site...I'd like to think I'm in the top 10. 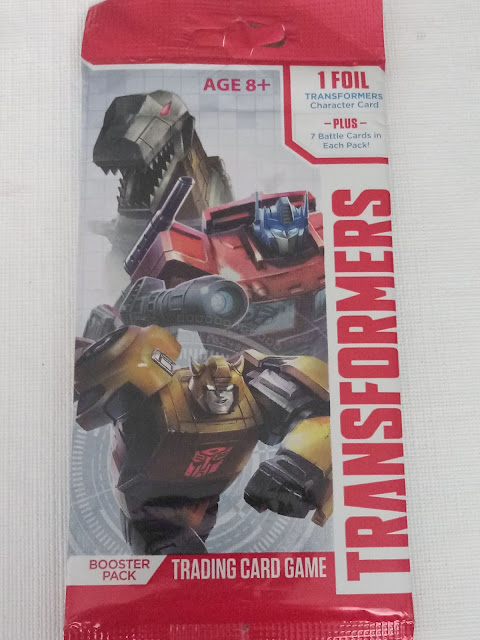 Back on September 28, 2018, Wizards of the Coast (the makers of Magic: The Gathering) released the Transformers Trading Card Game. Wizards is a subsidiary of Hasbro these days, so no doubt their relationship helped with the development of the game. 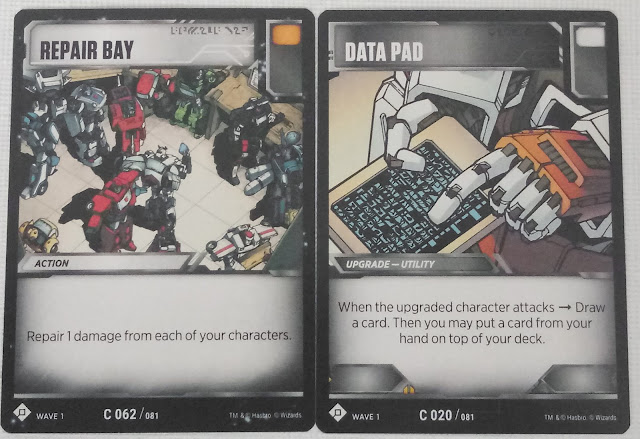 You can read and view how to play here, but basically each Transformer is assigned a specific value  (stars) and you can play up to 25 stars.  The characters can be a mix of Autobot (the good guys) and Decepticon (the bad guys) if desired.  One player chooses one Transformer to attack one of the opponents' characters, and then both players flip battle cards to see the total number of colored pips they accumulate (the pips are in the upper right corner of the card and each color means something specific, like attack or defense).

As you can see, the battle cards can be used in a variety of ways, like repair damage and add to the number of cards you flip.  The card number appears at the bottom of the card, and C stands for Common. 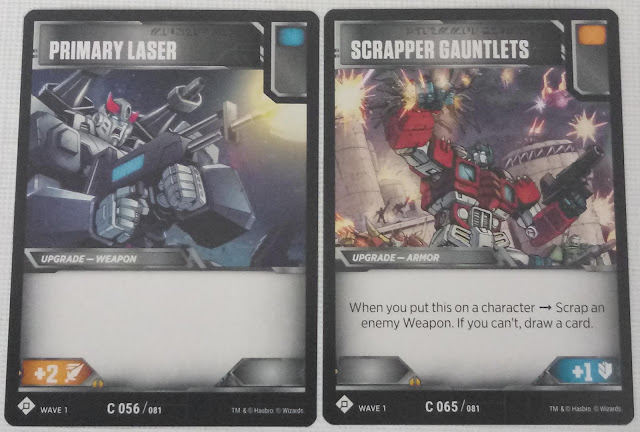 The +2 on the Primary Laser card means the character gains 2 attack when the card is deployed on the Transformer.  Likewise, the +1 on Scrapper Gauntlets gives the Transformer +1 defense.

If you're interested in the checklist, take a look.﻿ 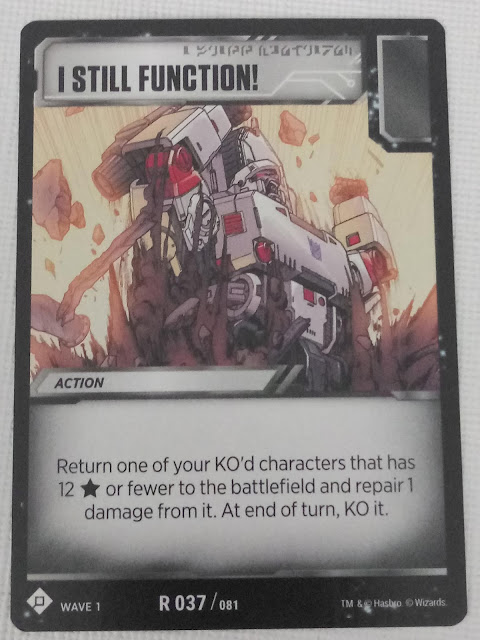 The fifth card is the Rare battle card, in this case named after a famous exchange in the Transformers movie.  You can see the reference to the character's stars in the text. 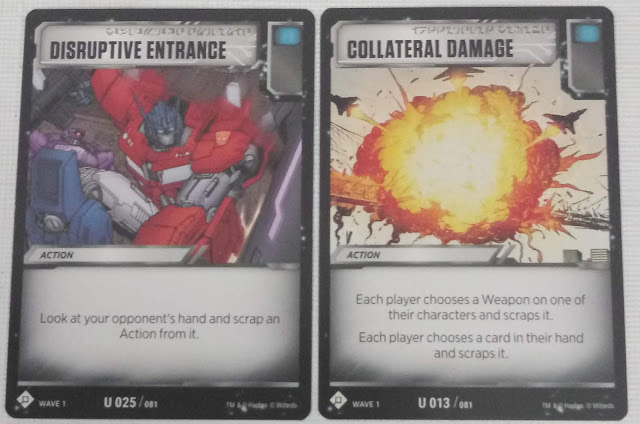 The last 2 cards in the battle card pack are the Uncommons.  I was hoping that the artwork would
come from the animated TV show from the 1980's.  Instead, they are pulled from the IDW comic books. 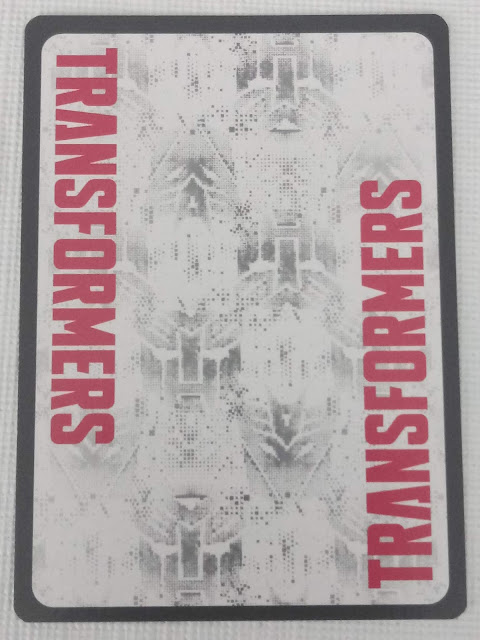 This is what the back of the battle cards look like.  Pretty plain, again, I was hoping for the old school Generation 1 Transformer logos...maybe that purple and red grid that graced the box art for the original toys.

Now that you've seen the battle cards, which Transformer did I get? 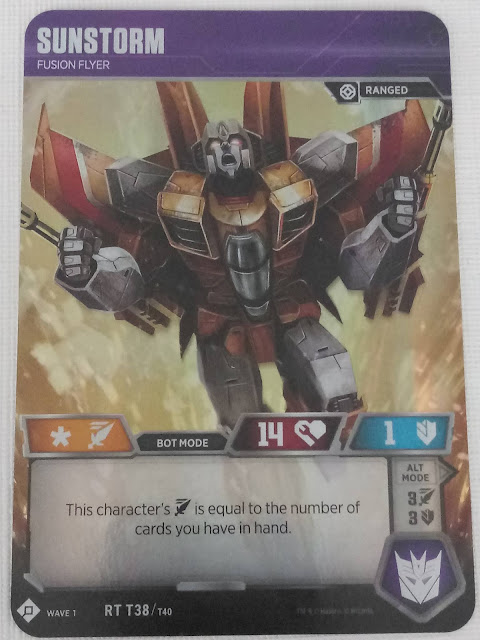 Pulled a Rare card in this case, so that's cool.  Generation 1 fans may not have heard about Sunstorm, but I guess he's a pretty big character in the comics.  The comic writers created characters like Sunstorm to address why there were so many different colored Decepticon jets in the original cartoon﻿.

You can see Sunstorm's attack, health, and defense numbers in the center of the card.  Any special enhancements or abilities appear in the text box.  Skills appear in the upper right corner
("Ranged" means he can attack from far away, as most jets can do).  You can see his Alt Mode stats in the box next to the text box because... 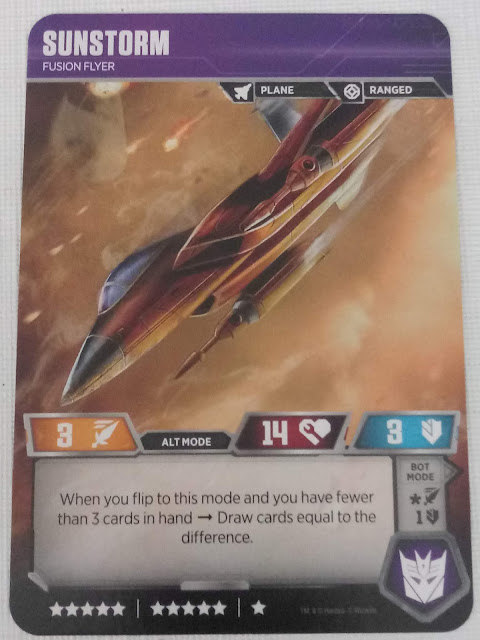 ...the card reminds you to flip the card over for the character's alt mode.  Yep, there's no regular card back for the character cards, you flip the card back and forth to "transform" the character.  As you can see, the Transformer's stats and abilities will change between robot and alternate mode. You also see the stars at the bottom of the alt mode; this means you start the game with your chosen Transformers in alt mode (and in this case, Sunstorm takes up 11 of your allotted 25 stars).

Anyway, that's the pack.  Boosters are $4 each, so they're a little pricey, but they fall in the range of other trading card games.  Aside from my hopes for a Generation 1-centric game (and the fact that your team could consist of both Autobots and Decepticons), the cards themselves are pretty nice.  I've been watching some You Tube channels with matches and it appears to be pretty easy to pick up (nope, I haven't played yet).

Once again, thanks for reading my ramblings for the past 8 years...hope you all had some fun!  On to the next 200 posts!

Love the idea that you can flip the card over to transform... and there are separate stats and abilities.