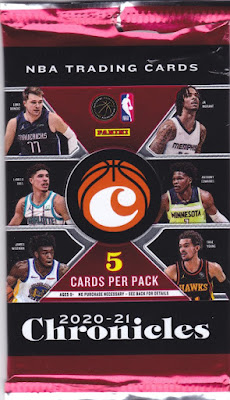 Until the NBA card market went completely crazy, Panini Chronicles was always a favorite of mine. The rookie heavy set packs a lot of variety into each pack. The set uses pretty much every design at Panini's disposal, at least the ones that haven't been used for their own set in a given year. Now that basketball cards are actually somewhat available at the retail level again (online, at least), I decided to pick up a blaster of the latest set. Here's one of the packs. 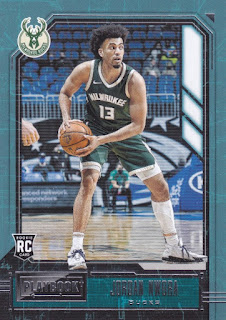 170 - Jordan Nwora - I'm not sure where Playbook comes from. Is it an old Playoff brand? Nwora is in his second year with the Bucks and has seen a significant upgrade in playing time and production this season. 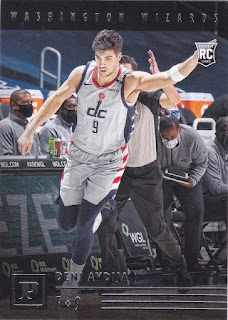 109 - Deni Avdija - This is the "Panini" design, although Panini hasn't actually released anything like this as an NBA set in about eight years. I think they do put out a "Panini" NFL set, but they probably consider NBA Hoops to be their flagship brand for basketball. Avdija started 32 games for the Wizards last season but has mostly been a bench player this season. 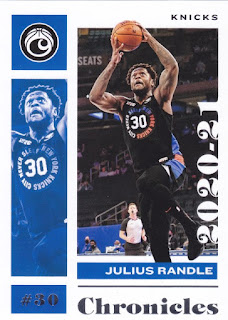 12 - Julius Randle - The "base" portion of the Chronicles set is where you'll find most of the non-rookies. This design is always pretty busy and no one year's really stands out to me. Randle made his first All-Star team last season and could be in line for another appearance if his Knicks can ever get it together. 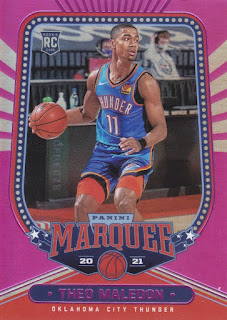 270 - Theo Maledon Pink - Blasters are full of pink parallels like this one that uses the Marquee design. The original Marquee cards were thick, but this one is your basic size. Maledon started 49 games for the rebuilding Thunder last season, but has fallen out of the rotation this season. 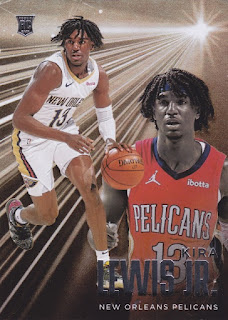 222 - Kira Lewis Jr. - I wasn't a huge fan of the Essentials NBA set when it came out in 2017-18, but it was definitely available and affordable at the time. This design is a significant improvement, which makes it a shame that it didn't get a full release. Lewis hasn't gotten a ton of playing time with the Pelicans, especially with the acquisition of Devonte Graham and the continued ascension of Nickeil Alexander-Walker.