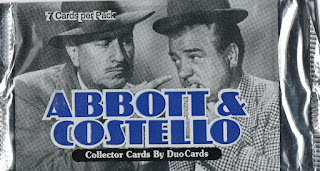 Here is a pack of 1996 DuoCards Abbott and Costello cards. The cards are standard 2x3. There are 72 cards in the regular set, including a checklist, plus there are 6 "Chromium" cards in a chase set. An additional promotion involves a redemption card for a "Talking Card" that features the famous "Heeeyyyy Abbbooottt!" line from Lou Costello. Apparently, there are also dealer promo cards as well.
Each card features a scene from a movie, a rendering of a movie poster, or other artist renditions featuring the two. The cards are either in color or appear to have been colorized. The stills have an "Abbott & Costello" foil embossing, while the movie posters do not. Here are a couple of the movie still cards:

And here we have examples of the moview poster cards:

This pack had more movie poster cards than stills. I don't know if that's normal or not: 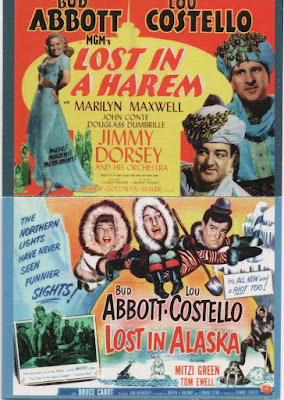 The card backs have the pair set as something of a watermark as a background. The top of the card has "Abbott & Costello" in huge blue "Hollywood" font with a white duplicate acting as a shadow. Below that, in white lettering, the card's title/caption. Under that is information related to the image on the front of the card. Near the bottom of each card is a portion of the famous "Who's on First" routine. I assume that if you had the full set, you could read through the entire routine. That's pretty cool! The very bottom of the back contains copyright info and the card number: 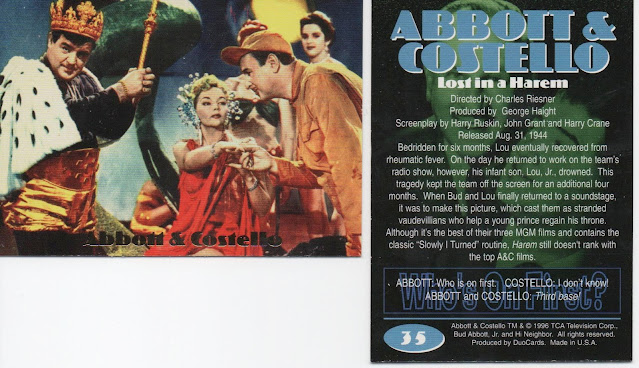 Here's a checklist with chase info:

Email ThisBlogThis!Share to TwitterShare to FacebookShare to Pinterest
Labels: 1996 DuoCards Abbott and Costello

Used to watch their movies on Sunday mornings back in the 80s.