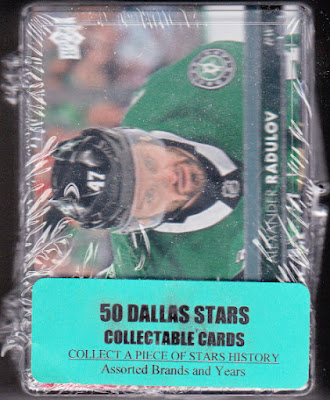 After last night's victory Dallas Stars are up 2-1 in the first round series against Calgary Flames. I had this since since start of the season, got it scanned, and forgot about it. The cards will be divided by year and set. 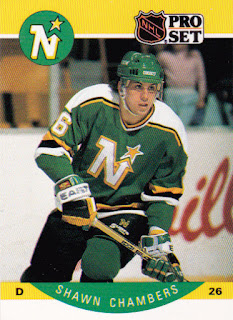 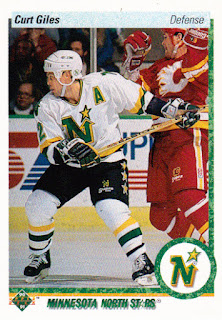 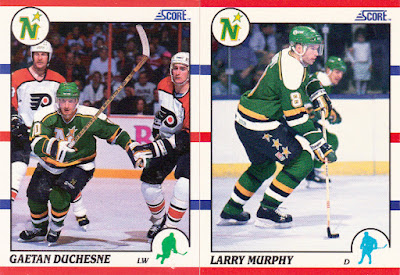 1990-91 Score: Gaetan Duschesne, Larry Murphy - Murphy would join Penguins later that season and won the Cup the year and another the following year. Would add two more Cup with Red Wings also in back to back year. 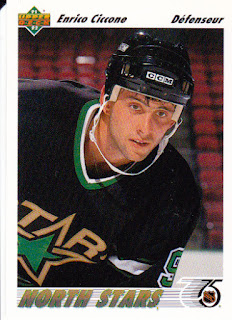 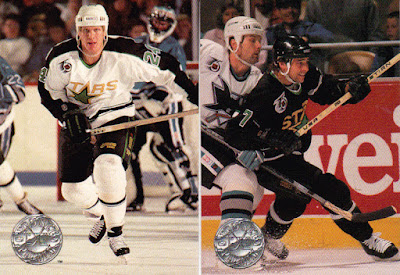 1991-92 Pro Set Platinum: Mark Tinordi, Neal Broten - Broten is famous for being part of 1980 Miracle on Ice US Olympic team 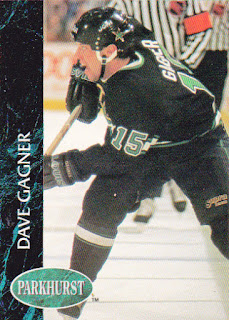 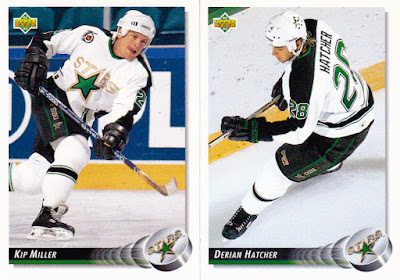 1992-93 Upper Deck: Kip Miller, Derian Hatcher - Derian wore 28 for few years before switching to no. 2 for remainder of his career. 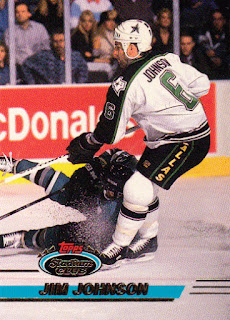 1993-94 Topps Stadium Club: Jim Johnson - start of their Dallas years as the team relocated from Minnesota to now torn down Reunion Arena. I admit it was puzzling to me when I heard NHL team moving to Dallas in the heart of Cowboys country while growing up and I'm not a Cowboys fan. 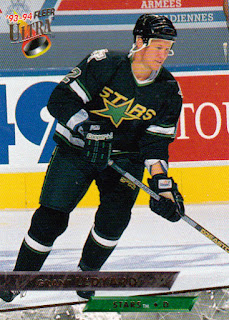 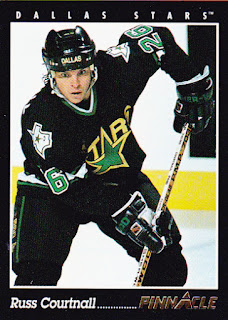 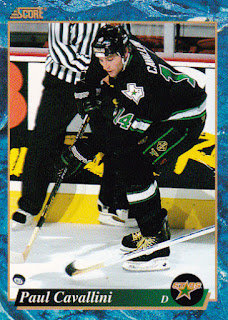 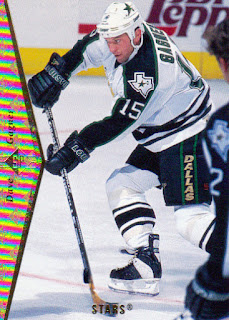 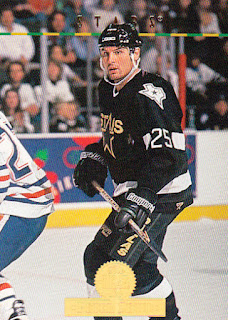 1994-95 Fleer Ultra: Paul Cavallini, Russ Courtnall, Jarkko Varvio - the 13 games Jarkko played with the Stars in the only games he played in the NHL before spending remainder of his career back in Europe. 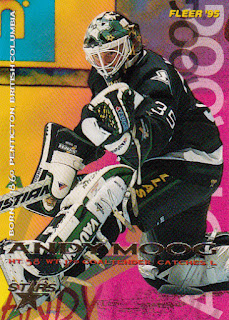 1994-95 Fleer: Andy Moog - the infamous 1995 Fleer card design. While it was heavily panned especially the baseball set it look good on the hockey set 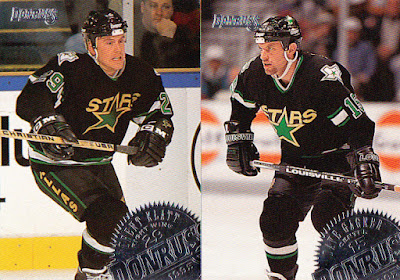 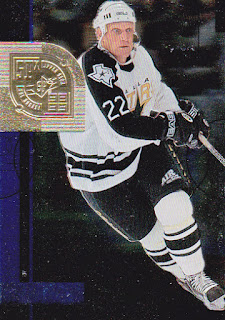 1998-99 Upper Deck SPX: Brett Hull - Hull first season with the Stars and scored the game winning goal in the Stanley Cup to give the Stars their only Cup title. 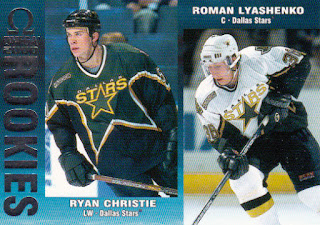 1999-2000 Pacific Omega: Ryan Christie/Roman Lyashenko - Christie only played 5 games with the team while Lyanshenko played 2 1/2 seasons before getting shipped to the Rangers 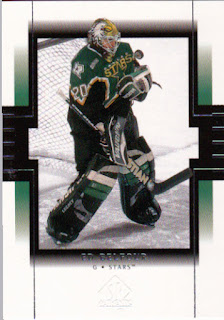 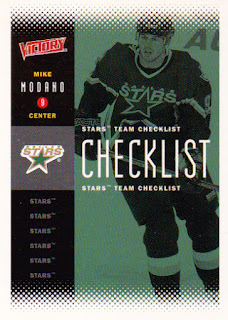 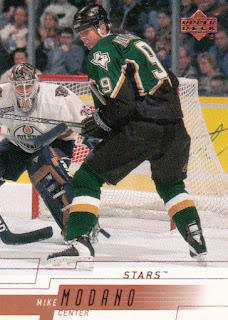 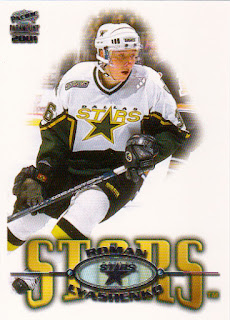 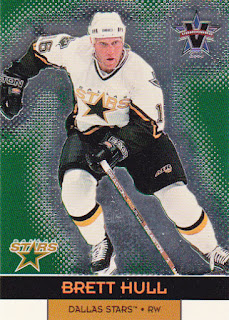 2000-01 Pacific Vanguard: Brett Hull - Pacific was putting out too many hockey cards that year 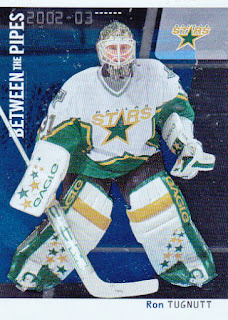 2002-03 Between the Pipes: Ron Tugnutt - In The Game put out a set dedicated to goalies of the league. 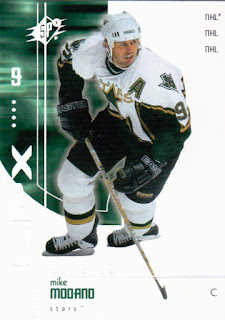 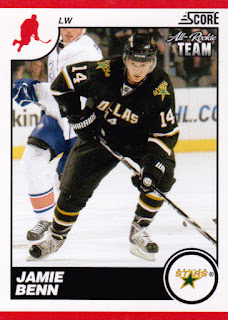 2010-11 Score: Jame Benn - Captain Benn is one of two faces of the current Stars franchise along with Tyler Seguin. 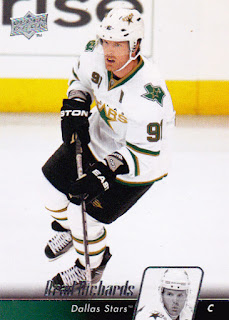 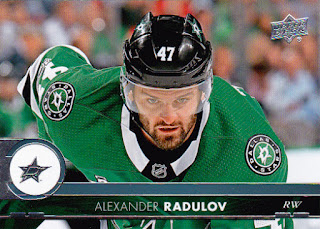 2017-18 Upper Deck: Alexander Radulov - a big down year for him on his final year of his contract. I don't see him returning to the team after the season.

Enjoyable as I got 4 Modano cards as well Benn and few NHL Hall of Famers like Broten and Hull. Can the Stars make it to the second round? Who's watching playoff hockey?

Sorry, you're not allowed to count the North Stars as part of Dallas' history. That's just not right.