1993 Pacific Leave It To Beaver 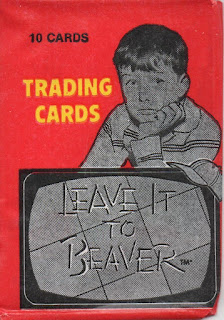 Today, we're opening a pack of 1993 Pacific Leave It To Beaver cards. The cards are standard 2x3 size. The set contains 60 cards. Each card features a still from the show or a publicity pose. All the pictures are in black and white, surrounded by a white border. At the bottom of each card, there are captions, character names, or quotes from the show.
These are printed VERY dark, so I lightened them up in editing.
The first two feature stills and quotes from the show: 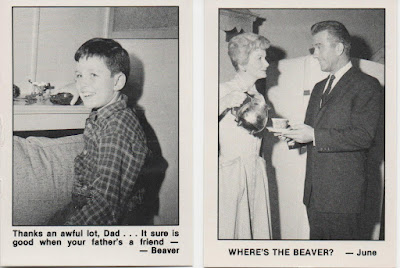 The next two cards seem to have the publicity photos with captions. The third is another still from the show with a quote:

Some of the cards (like the first one below) seem to have some rudimentary background removal (or maybe it's a publicity shot). And, we have more stills from the show:

The next two really show off the contrast between light and dark and you can tell the left one had be worked on a bit because even my adjustments couldn't quite save it: The final card in the pack is a quote that was probably used in nearly every episode: 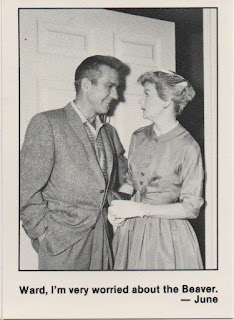 The card backs feature a "TV" border at the top with the "Leave It To Beaver" logo. In the upper right, a ball cap rests on the corner of the "TV" with the card's number printed in red. Below the TV, text related to the image on the front is printed in red. At the bottom of the card, printed in black, is the copyright information. Not sure why they bothered to use red ink on the back. 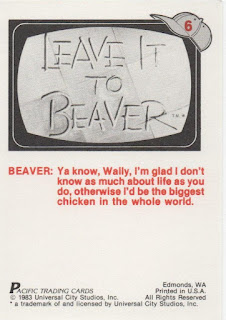 Here's a checklist of the cards in the set:

Email ThisBlogThis!Share to TwitterShare to FacebookShare to Pinterest
Labels: 1993 Pacific Leave It To Beaver

That Hobby Time card is a fun one. The Vogue website makes it very easy to look up their issues by cover. That one is dated February 15, 1960.

That is awesome! Based on your findings, I started poking around and found the Model Airplane News magazine he is holding: March 1960!

A. Loved this show as a kid.