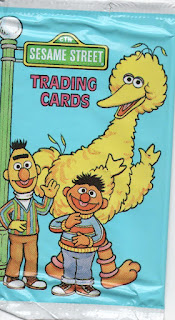 Today, we have a pack of 1992 Idolmaker Sesame Street cards. The cards are standard 2x3 size and there are 100 cards plus 2 unnumbered checklists in the set. They feature images surrounded by a white border. Some of the cards show numbers or letters along with various characters from the show. Other cards depict vidcaps and stills from different episodes.
The first two cards show Harry Monster and The Count. The number/letter appears in the upper right corner, with a caption in a yellow border at the bottom:

The next two cards also feature a number/letter. This make sense given what Sesame Street does and how it reaches children. Here we have Ernie and Cookie Monster:

Next up, we have Big Bird hanging out with a couple friends and a koala: 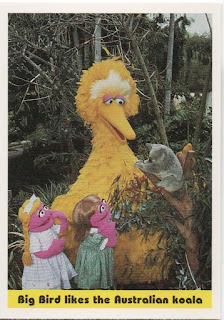 Here is the gang loaded in the back of a truck, checking out a huge rhino and Cookie chillin with a cheetah: 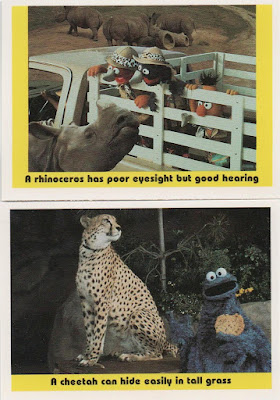 Never one to shy away from various topics, here we have the gang going into a mine and posing for a pic at a petting zoo: 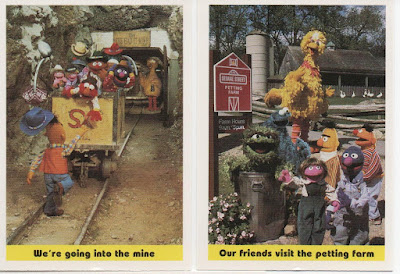 The last card in the pack is Cookie Monster with 19 cookies (you know, back when he was allowed to actually eat cookies).
The card backs feature a white border with a yellow background. The card number sits in a circle at the top left with the Sesame Street street sign logo next to it. Below that, a caption and some related text. That is followed by a riddle with the answer. At the bottom, we have copyright info: 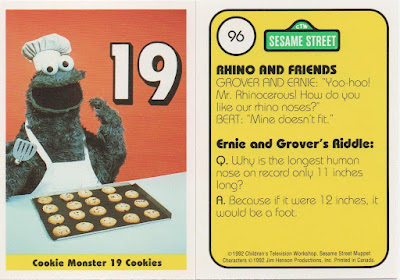 Here is a checklist for the set:

These are higher quality than one might expect. I also have poor eyesight but good hearing!

If these had been around when I was 4 years old I would have wanted them so hard.

Wish I had known about these 5 years ago. My nieces loved Sesame Street. These days they more into football, which is pretty cool too.