Written by deal at 8:47 PM
This is Deal from Phungo here with my first ever "A Pack to be Named Later" posting. I will likely most often be ripping baseball packs but after noticing all the variety present on APtbNL I decided to go with a non-sports pack.

And with that Team Phungo brings you a pack of MTV's 1994 Beavis and Butt-Head! Notice the top 2 corners - on the Left the MTV logo, on the right the ubiquitous Fleer Ultra logo - circa 1994. Apparently Fleer really did produce anything during that era.

Also notice that neither Beavis nor Butt-Head have their traditional AC/DC or Metallica Garb. I have seen the Skull and Death Rock shirts on various Beavis and Butt-Head items due to licensing issues.

I found this pack at a card show and it had been double knocked down first to 1.79 and then to an even buck. A good price I thought, unfortunately I was pretty disappointed. For the most part the cards brought back little of the show - I could only vaguely connect about half the cards to episodes I remembered and if the backs contained any dialogue from the show, it wasn't familiar to me at all. As a whole I found the cards just plain dull, which was a real disappointment. 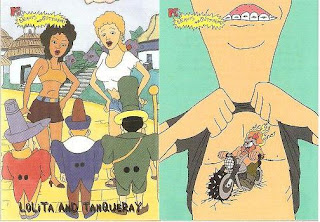 I had totally forgotten about Lolita and Tanqueray, and just seeing them made me laugh. However, it was the only card in the pack that brought a chuckle. And no I don't think there are 8000 cards in this set - every card either begins or ends with the number 69 - okay realizing that made me snicker. Although, had there been 8000 cards in the set, one could understand their lameness. 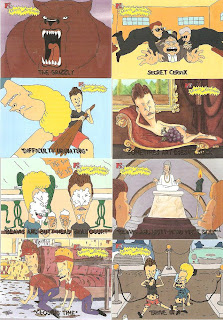 ok the art one is funny and I like the Yogurt one because my girlfriend is always trying to get me to eat the putrid stuff. The God one is a little funny too. 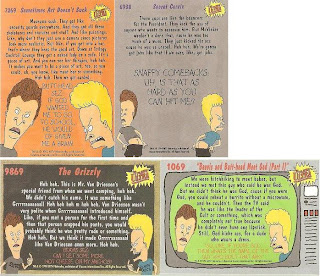 Hopefully you can read these when you enlarge them. The Art and the God ones are sort of funny - the other two are mailed in - or maybe it's just not the same without the snickering and the huh uh huh, yeah! YEAH!

Ok - lets not have everyone click on Hall of Fame all at once. ("Yeah Butt-Head that might bring down the internet and that would suck, huh huh huh")

That does it for the first Phungo edition of "A Pack to be Named Later". There will be more and I will be looking for some baseball packs to post.

that's really crazy that they used the Ultra line to do a set like this.