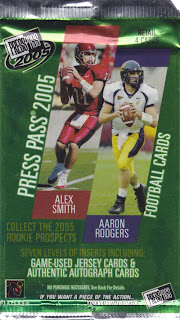 I have a soft spot for college football cards. I can never bring myself to buy NFL cards anymore (I gave up when I spent my last fiver on a box of Pro Set like a desperate junkie) but I am a big fan of the college game. I found this little number in one of those Target bargain boxes, I can only assume, since it has the familiar $1.59 price sticker on the back. 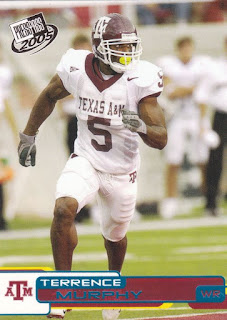 B26 - Terrence Murphy Blue - This must be some sort of parallel, as is often the case with the Press Pass and HIT stuff. I can't see the stated odds on the wrapper because of the aforementioned price sticker, but this is probably something of the more common variety. I had never heard of Murphy, who apparently caught 5 passes with the Packers before retiring due to the discovery of a spinal issue. Yikes. 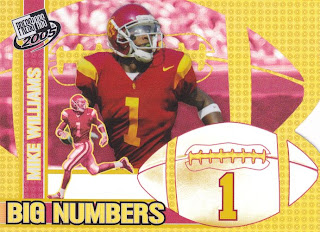 BN 23/25 - Mike Williams Big Numbers - Mike Williams was one of the guys that tried to buck the early entry requirements for players leaving college football for the NFL. He floundered when he finally got a shot at the NFL until his college coach Pete Carroll signed up up with a two year gig in Seattle. He hasn't played this year, however, and is a free agent. 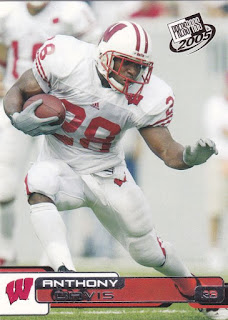 15 - Anthony Davis - Not to be confused with the unibrow guy, this Anthony Davis was drafted by the Colts but didn't make it in the NFL. 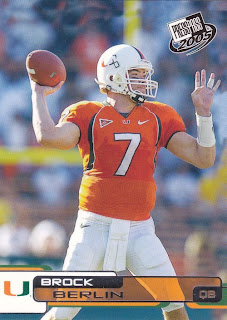 2 - Brock Berlin - Finally, it's Brock Berlin. He was a Rams backup for a couple of seasons but didn't really make an impact in the pro game. 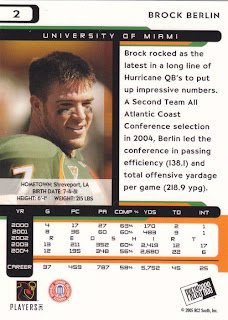 It's a nice touch that different photos are included on the back. It seems like a lot of these types of sets get lazy with photo selection.