Written by JediJeff at 4:01 PM
Stick with me, readers - I am going to do my best in explaining what I have here. I found these cards in the regular card aisle at Target. At first glance, I was quite confused as to what these cards honor, as I am sure I have not witnessed this sport played recently on television. But, as APTBNL's motto states, we will try anything once, so I picked up a pack to share with the rest of you. I spent time on Wikipedia researching this sport, and I will do my best to explain it to you through the photographs on the cardboard. First though, let's just show the pack. 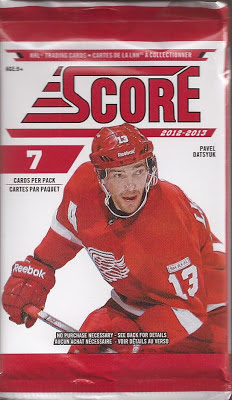 You can see from the bright red and white contrasts why I was drawn to this pack. Again, being that I have not seen this sport shown on NBC, ESPN, Comcast or my local WGN station in recent months, the image on the front has me baffled. This "player" is wearing what appears to be a uniform. The apparatus on his head appears to be some kind of protective unit. You see the strange gloves over his hands. I thought they were to handle some nuclear waste of some sort, but it looks like a weapon in his hand. Don't worry - my research has explained what he is holding and I'll go in detail soon. Interesting item, though: notice there is no mention of the name of this sport on the wrapper. We know we have 7 cards in celebration of the players, yet what is this sport they are playing? Also, what is this foreign language that accompanies the English words? Alright, let me explain.

This is a sport called HOCKEY. You pronounced it almost as it's spelled. The first letters "hock" do rhyme with "lock", and the "y" at the end is silent. A good phonetic spelling of the sport is HAA-kee. It is very popular in Canda, which is the other language on the pack - French. The idea of this game is the players attempt to put a "puck" into the "net", also referred to as "putting the biscuit in the basket".

Here is a better shot of a "hockey" player. 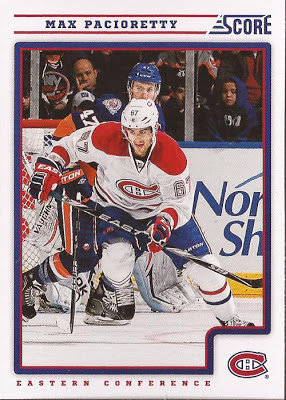 Remember I mentioned a weapon in his hand? You can see it in better detail in this picture. This person, named Max Pacioretty, has a hockey "stick" in his hand. It is basically a much longer and thinner baseball bat that is curved at the end. This curve allows the player to "pass" and "shoot" the puck. The playing surface is not dirt, grass or floor but ice. Here - check out card number 2. 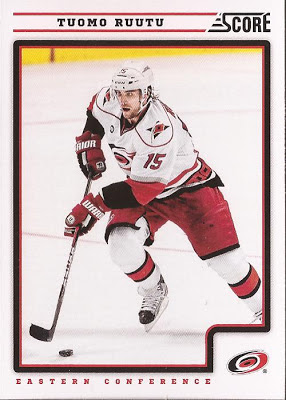 Now Tuomo Ruutu (side note - many names of these haa-kee players are difficult to speak) is skating on the ice. If you look close at the bottom of his stick, you see the haa-kee puck. Mr. Ruutu is skating on the ice towards the other team's "net" to try and score a goal (ie: biscuit in the basket). The puck is a round rubber object, black in color. While there have been attempts to give this piece of equipment a warmer name, it is always referred to as the puck. 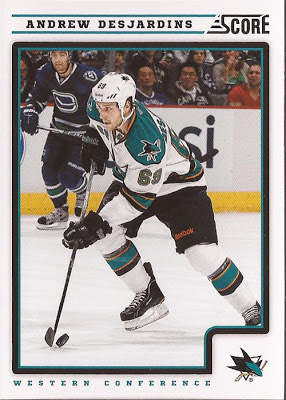 Here is another player with the puck at the bottom of his stick. Andrew Desjadins plays for a team called the "Sharks". I wonder if the relation between water and ice inspired the team name. 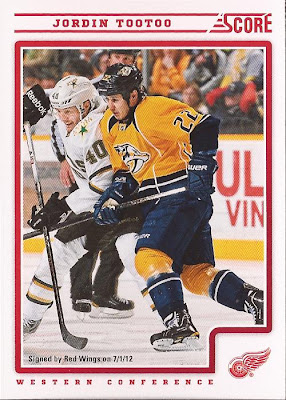 This is Jordin Tootoo. Remember my comment on the difficult names? Notice the scary cat figure on his jersey. The card, however, seemed to state Mr. Tootoo moved to another team named the Red Wings. The logo is a tire with wings. Whatever this sport is, violence seems to run rampant through it. 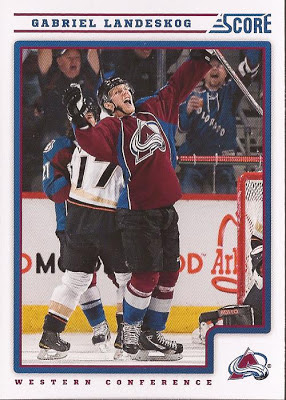 Alright, this card has me confused. Not only with the difficult name (Gabriel Landeskog), but I am not sure what he is yelling for. From my research, it is possible Mr. Laneskog in engaged in some ritual chant after scoring a "goal". Yet, with the reference to "biscuit in the basket", I wonder if he is calling for a waitress to get more rolls. I will continue the research and get back to you all with what I discover. 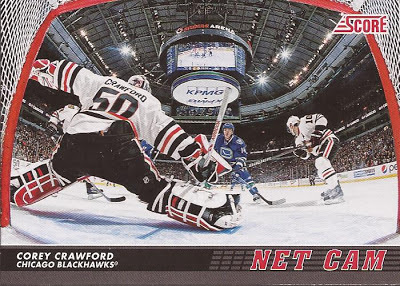 This is a very exciting card to pull for two reasons. Referencing the the above card about a possible goal scoring, this is a picture taken from the inside of the goal. The player with the #50 (Corey Crawford) is the "goalie". Notice the extra padding and drastically different gloves on his hands. Mr. Crawford has the job in the haa-kee game of stopping the puck from going into the goal. I am not sure what that is in the top center of the photo. It may be the same haa-kee game that this picture is from, or maybe not. The other reason I find this card exciting is that I feel drawn to the team that Mr. Crawford plays for. They seem very powerful and fantastic to root for - a much better team than the silly red wheel and wings that the Tootoo guy is playing for. 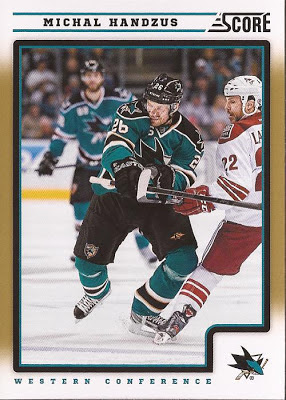 Here is another Shark player, Michal Handzus. It appears the player with the other team (in white) is attempting to slow up Mr. Handzus from moving around the ice. The game permits players to "check" each other, and it has nothing to do with a bank account. You are permitted to bump, grab and knock over players that have the puck on the end of their stick. I am sure the ice must hurt if you get knocked over. I turned over Mr. Handzus' card to show you the back. 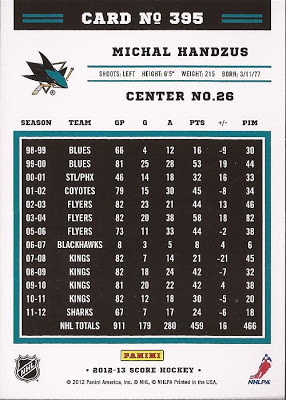 There's that Blackhawks team again. They sound superior to all others. I must learn more about them.

Ok, that is all the cards. I hope you have learned something about this game called haa-kee. Maybe we will be fortunate to see it on the television screen soon because all I have read seems exciting. I didn't even get a chance to talk about "power plays", the "penalty box" or this coffee mug owned by some Stanley guy they call the holy grail.

Thank you for the first lesson in this game of Hock-a-Key? The middle card with the view from the what did you call it? Goo al? It sounds messier than it looks. I would love to know more of this sport and hope that maybe some network television stations will broadcast some of these games perhaps next year?

There is no possible way this could be a real sport, if every single "player" you pulled out of this pack is caucasion.