Written by JediJeff at 12:52 PM
Greetings. I'm Jeff, the newest contributor to this site. Hopefully you read and/or follow me at my regular haunt of 2x3 Heroes. I have decided to join this gang of misfits, since who doesn't like ripping open anything and everything, right? So let's jump right in with a brand new product: 2012 Upper Deck Golf. Picked this up from Target. 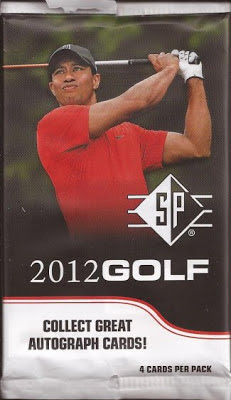 Pretty straight forward wrapper with very little in the way of words. Four cards in the pack. Let's see them. 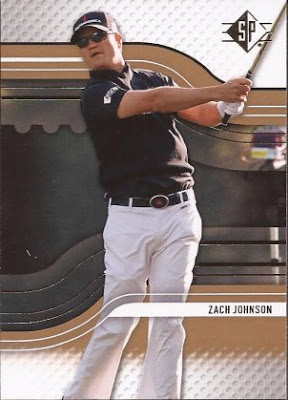 The "veteran" of the pack - Zach Johnson. Bit busy of a design. You can't go wrong with the golf ball dimple look, but is that some flowing river behind him? Golf club head? I bet it's pasta noodles. The backs show the same image (without the funky flow foil) and some stats. 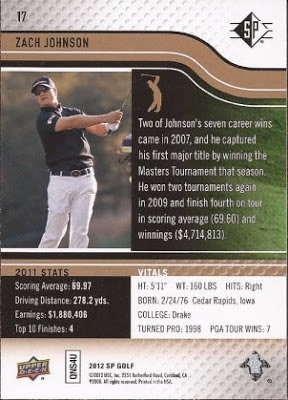 As I said, this is the veteran of the pack, by means of his 7 tour victories. And 1.8 million in winnings during 2011. Barilla pasta for this guy. 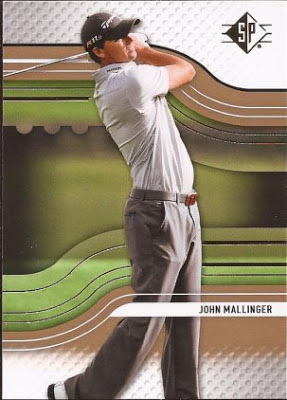 Card two is the pack rookie - John Mallinger. While he has been on the tour for 10 years, he has not a single title to his name. And the poor guy only made 179k last year. Ramen noodles again for dinner, Johnny! 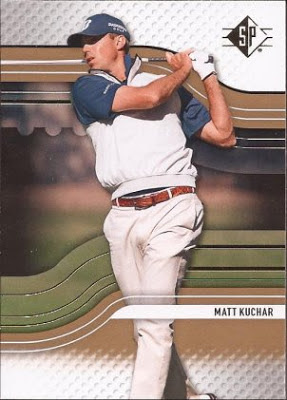 Next is Matt Kuchar. I think I may have heard his name in the background while over at my brother-in-laws house during dinner. But at least he has 3 victories in his 12 years on the tour and banked over 4 mil in 2011. Matt hires a chef to hand craft linguini in his house through some electric pasta machine purchased at Brookstone. 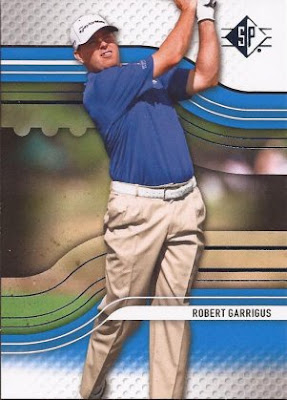 Last would be our hit of the pack, in that the blue parallels are seeded 1:2. Robert Garrigus had a break out year in 2010, nabbing his first title after 13 years on the tour and earning 1.5 million in 2011. Interesting fact: Robbie attended community college. So while his winning can afford Prince spaghetti, I am sure he buys the store brand.

Per the pack, each box should have one relic hit. With that knowledge, since the relic pack would be the best of the box, I am calling this pack the worst pack of the box. If you think otherwise, let me know.