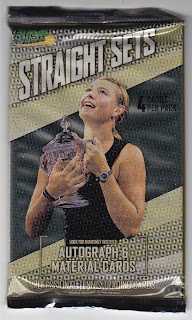 I recently placed an order over at Dave and Adam's Cardworld and received a box of 2007 Ace Straight Sets for free.  Now, I'm not going to sit here and profess my love for tennis.  I own a racket and  have played three or four times in the past decade, but that's about the extent of my fandom.

So why did I pick this product?  Well... it's pretty simple actually.  I wanted a shot at pulling this:

You don't have to be a tennis fan to know Maria Sharapova and the fact that she's smoking hot.  Unfortunately, I didn't pull a card of her (hence the COMC image)... but here's a look at what I pulled out of my first pack:

Mr. Ginepri is currently ranked #283 on the ATP World Tour.  According to Wikipedia, he participated on Spike TV's Pros vs. Joes with Rik Smits, Rob Dibble, and Andre Rison.

Outside of my guaranteed memorabilia card, this was the only other insert in the box and one of the few names I recognized in the product.  Nadal is currently the 4th ranked male in the world.

Believe it or not, this was one of my favorite cards in the box because it's actually going into my Japanese athlete binder.  Sugiyama retired in 2009 and had a very successful doubles career.

I've never heard of this guy and can't seem to find much about his tennis career.  However, I did discover that 28% of the people who took this poll, think he's better looking than some guy named Sergey Demekhine.

If you are a tennis fan and would like to see a summary of my box break, click here.  If not, chances are you didn't read this post anyway.

Insead of Sharapova You should ask for Marta Domachowska :)