Written by Jafronius at 10:40 PM
Greetings!

There are only a few hours left until 2013 begins.  While we have fallen short of 200 posts for the year, I wanted to add one more tally to the 2012 final numbers.  It's a quick one, so you can zip right through this post and resume your partying.  Here's some 2012 Mash'Ems Angry Birds Series 1!

While not an actual pack of cards, it is something you tear open, and I believe that meets the minimum qualifications.  My kids each got one in their stocking from jolly old Saint Nick for Christmas.  Only he knows where they are now, but before they disappeared, I was able to grab one and do a quick scan for you all.

With the notation "Series 1", this could be the first of many Angry Birds.  The front of the pack says there is one mystery character inside.  Here's the back of the pack, to simplify the mystery: 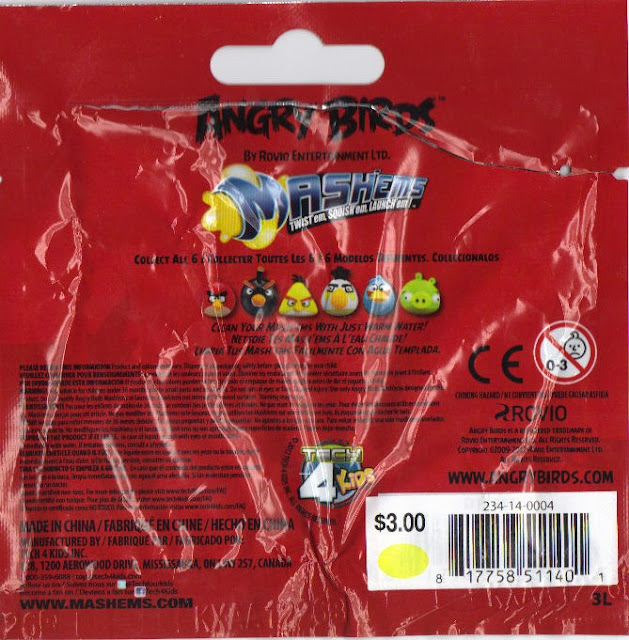 I only know of the 3 on the left and the pig.  Are there really enough Angry Birds to constitute a 2nd series?

Oh, and yes, it appears Santa is outsourcing at Target, where you can try to build your own set for 3 bucks a pack.  Which Angry Bird did one of my boys get?


I know the other Angry Bird was the black one.  You can squeeze them and pull them and do all sorts of silly stuff to them, and then wash them under warm water to clean them off.

Anyway, that's the pack.  I hope you all have a happy and safe New Year...keep on posting!

More next year...thanks for reading!