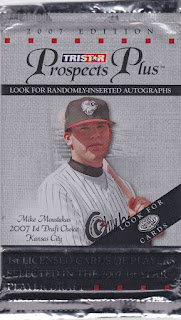 I took a flyer on this pack at last weekend's card show, not having any idea what the set looked like but knowing that it only would cost me $1. As it turns out, I've already seen some cards from this metallic fingerprint magnet of a set. 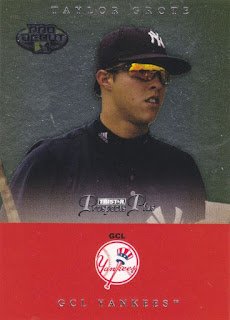 79 - Taylor Grote - Grote appears to have topped out at single-A, as he did not play professionally in 2012. He has a career minor league OPS of .620, and he's not a pitcher. 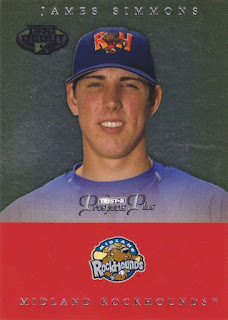 65 - James Simmons - Simmons is going places. He moved up to AAA last year and was mostly successful for the Sacramento River Cats in 9 relief appearances. 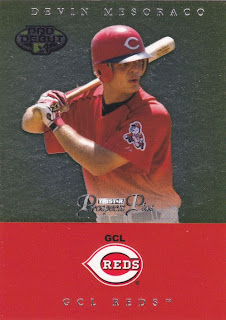 32 - Devin Mesoraco - Mesoraco got some quality time behind the plate for the Reds last year, but has yet to make much of an impact at the plate. 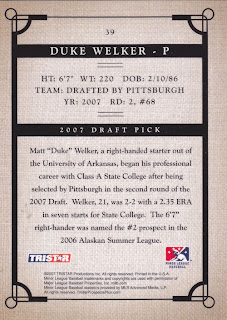 39 - Duke Welker - Welker seems like he may be in line for a job in Pittsburgh as he was successful after moving up to AAA last year as a reliever. 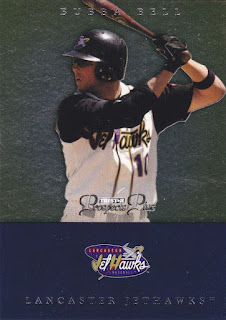 95 - Bubba Bell - The injury prone slugger had one great minor league season, but that was the same year this set was released. After topping out at AAA in 2011, he spent 2012 in indie league ball like the hipster he is. 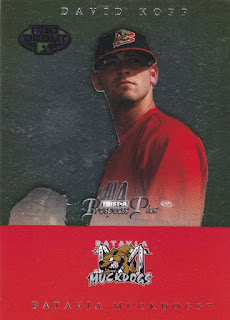 75 - David Kopp - Kopp was ineffective in two stints with AAA Memphis as part of the Cardinals system. The Cards gave up on him and he was signed to a minor league deal by the Tigers, where he spent 2012 in AA.

Email ThisBlogThis!Share to TwitterShare to FacebookShare to Pinterest
Labels: 2007 Tristar Prospects Plus