Written by JediJeff at 7:15 PM
Hey gang. I decided to take a dive into a higher end product when I hit my LCS a short time back and picked up a pack of Panini Classics. Every pack has a hit, with all the autographs on card. Five cards to a pack, with one being the auto and another a banner insert. More on that later. For you that enjoy the packs, here's the wrapper. 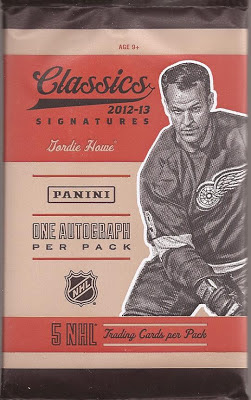 Mr. Hockey on the front of a nice retro looking pack. Great colors. I wish they would have used the older NHL logo, but maybe for license reasons they were not allowed. Best part? Look at the top of the pack. It has an age restriction: 9 or up. So let's check out my three base cards. 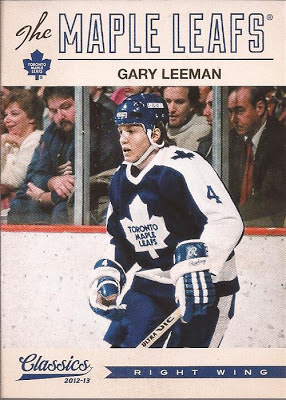 Gary Leeman. Of the top of my head, the name sparks no memory, so let's hit Wikipedia. Ok, he's a bit of a journey man, but did pot 51 goals one season and does have his name on the Cup with Montreal. 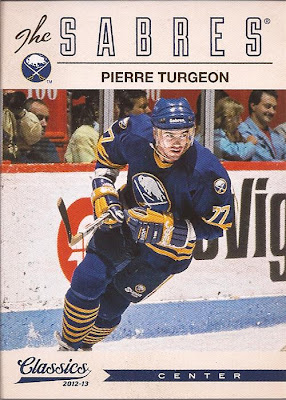 Pierre Turgeon. Getting better. First round draft pick. Had a successful career, though I think he fell a little short of what his potential was. Still, would take the guy on my team. 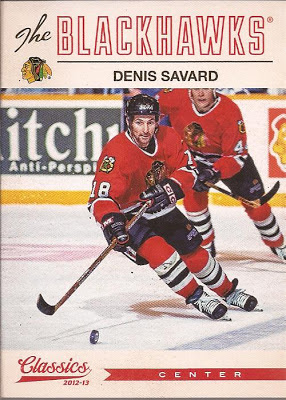 Savior Faire. Now we are talking! Great shot of Denis (with Patrick Poulin in the background), getting ready to head up ice. You can just see, in his eyes, he's thinking Spin-o-rama. Sucks he had to go to Montreal to get his name on Lord Stanley, but he deserves to be on there. 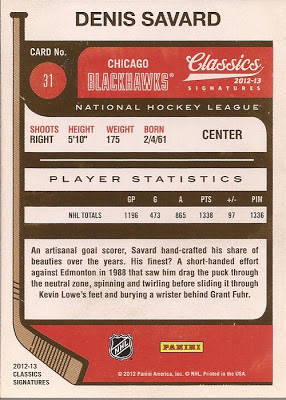 Here's the back of Denis' card. The scratching and aged look of the card is intentional. Bit of wasted space, as they only put their career stat totals on the back along with a little playing days blurb. If you go to the start of that Spin-o-rama video I linked, you can see the goal mentioned here. 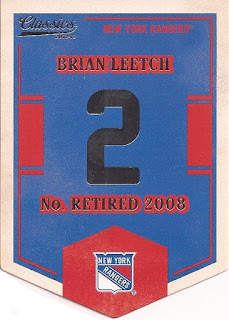 Here's that banner card insert. It is a die cut. The innerwebs aren't keen on these, and I have to agree. The idea is nice and certainly different. I don't know - they just kind of stink. It's cutesy, but that is about it. The banner is the last card of the pack, but I held the hit for the end. And what did I get? 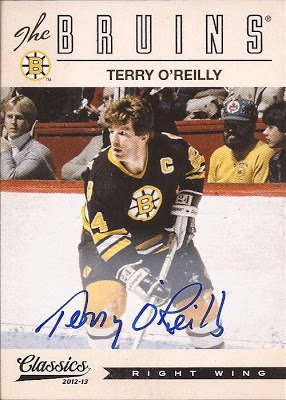 Terry O'Reilly. Old school with no helmet. +5. Had to Wikipedia this dude as well, though. He was the heavy with Boston in the early 70's, protecting the stars of the Bruins. He decided some fans in Montreal needed to have a close, personal discussion with his fists and got an 8 game suspension. His #24 is retired by the club, so he's a big deal in Beantown.

There ya go. Maybe if I find another pack of this a little cheaper, I'll rip open a second. We'll see.

Denis Savard is a great guy as well as a hockey legend. Check out his sense of humor in this bit with Eddie Olczyk:
http://youtu.be/gCImmCHx7zs

That O'Reilly auto is really slick, if you'd be interested in trading let me know!

Not a big fan of Panini, but this is one of their better products. Congratulations on pulling a O'Reilly on-card autograph... that's a nice pull.

Yup, you really lucked out scoring an O'Reilly auto. There are some REAL stinkers in this product. Have met Terry on a few occasions and this man has the biggest damn hands I have ever seen. Even at his age I think he could give you the patented rifle shots.