Written by Fuji at 9:30 PM
I just won four packs of 2012 Panini NFL Player of the Day packs over at All About Cards and since it's the season of giving, I figured I'd share my winnings with you.

But before I give anything away, let's check out what I pulled from the packs:

Each pack contains two cards from the eleven card base set.  I was hoping to pull an Andrew Luck, but  instead I found Darren McInjured and Mr. Beast Mode.

No Luck again.  But A-Rod is a nice consolation prize and who doesn't like the Head & Shoulders guy.

This pack was Bush league.  My first double... at least it's a Hawk.

Overall, if you're a fan of Panini products, then you probably like this design.  I'm going to keep one of the Lynch's for my Seahawks PC,  one of the McFaddens for a student, and the Aaron Rodgers for my Packers PC.

But the remaining cards are up for grabs.  Just leave a comment saying you want them and I'll randomize the interested parties' names on Random.org.  Let's set the deadline for Christmas afternoon at 3pm PST.

And if nobody wants them... well, I don't blame you. I'll just give them away to my students. 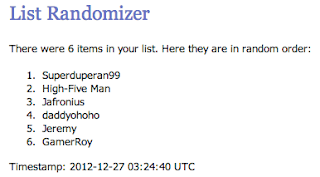 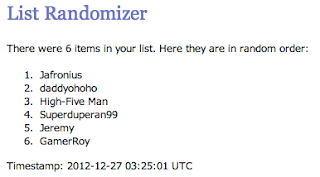 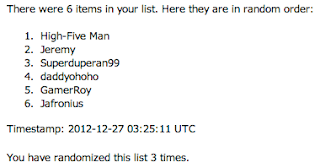 I randomized the list of 6 entries and High-Five Man was on top.  I'll send you an email in a few minutes asking for your mailing address.  Congratulations!

Email ThisBlogThis!Share to TwitterShare to FacebookShare to Pinterest
Labels: 2012 Panini NFL Player of the Day

Thanks and happy holidays.

Heck why not count me in.

I sort of like the design, but I need that DeMarco so count me in. And Merry Christmas Fuji.

Yeah, sure why not, I'll play your reindeer games. Merry Christmas!

Sorry about the delay... got caught up in the Christmas spirit. I'll do the randomization and add the results to the original post. Give me about 5 minutes.