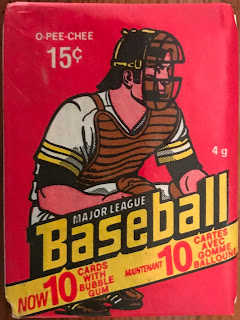 Back when Topps had a monopoly on baseball cards (no, not in the 2000's, but the FIRST time...), they at least would license their products to companies like O-Pee-Chee. These are 1978 O-Pee-Chee cards from Canada. The set only had 242 cards, mostly focused on Blue Jays and Expos players or ex-players. It used the same design and pictures from the Topps 1978 offering. These featured a white border around the card. Images take up the majority of the real estate, thankfully, surrounded by a colored thin border. In the top corner (usually on the right), a baseball design with the player's position. At the bottom, the team name in a script font my brother and I used to refer to as "The Written Kind" when we were kids (and, evidently, too dumb to look at the date on the back in order to differentiate which Topps sets we were talking about). The player's name is typed in all caps in the lower side opposite the team name.  Man, I loved this set as a kid. 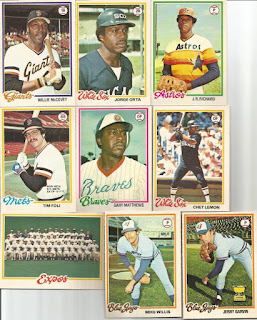 The backs of the cards were printed on a much brighter cardstock than the regular 1978 Topps. At least, in my estimation. The backs feature bio info, stats, a tidbit about the player, and a game that could be played by two collectors - all written in English with a French version underneath! The gum you see is absolutely stuck to the poor Jerry Garvin card. 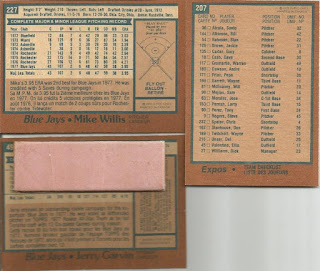 You can pick these up much cheaper than their Topps counterparts, plus they make a cool addition to any collection. If you have youngsters getting into collecting, they should find these bits of cardboard quite entertaining.

OPC lacked quality control during the late 70's/early 80's. The cards are generally not well cut and have a tendency to be off center. The card edges are ragged. For some reason they did not use the standard cutting process during that period.

Don't forget that the OPC baseball also have updates on the cards with 'Now With' or 'Traded to' on the card fronts.